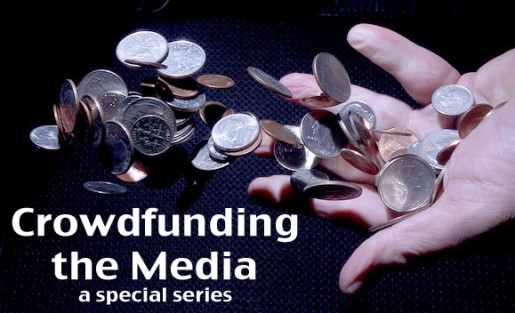 The premise of a recent investigative report from the NPR Planet Money team is pretty old school actually — track a product from beginning to end. In this case, it was a T-shirt followed from a cotton farm in Mississippi to its final place on someone’s back, with a stop in tragedy-riddled Bangladesh in between. That kind of story has been done by documentarians and journalists for decades. But, how Planet Money funded the project, and how it built up traction for it, is what’s so innovative.

The investigation itself is notable — a great, nuanced look at the interdependence of developing and developed countries, our ignorance in what we buy, and just how tangled the global economy really is. But how the project came about has also become a news story in itself — one that showcases just how powerful crowdfunding has become for media projects.

Producer Alex Blumberg told PaidContent’s Mathew Ingram mid-campaign in May that crowdfunding is a natural fit for an NPR project — after all, NPR is actually a crowdfunded media shop itself. But, the model isn’t just for public media.

As Blumberg told Ingram, “the Internet is driving the entire world towards a public-radio model.”

All this week on MediaShift, we’re running stories that look at this new crowdfunding landscape — what’s happening with it in Washington, D.C., how it’s playing out in other countries, and how everyone from filmmakers to authors are employing it to push their creative projects forward.

How the SEC Listened to the Crowd for Crowdfunding Rules, by Paul Spinrad

What Civic Crowdfunding Means for Non-Profits, by Rodrigo Davies on Idea Lab

6 Tips for Crowdfunding Your Project on YouTube, by Josef Holm

Online Platforms Give the First Public Look at Private Equity, by Paul Spinrad

Your Guide to DIY Crowdfunding Tools (to Avoid Kickstarter Fees), by Paul Spinrad

Crowdfunding Journalism: A New Financing Model for Freelancers?, by Eric Mark Do

Have a story to share? Give us a shout at: mediashift [at] pbs [dot] org.

Managing editor Courtney Lowery Cowgill is a writer, editor, teacher and farmer based in central Montana. In addition to her work with MediaShift, she teaches online courses at the University of Montana’s School of Journalism. Before she came to MediaShift, she was the co-founder and editor in chief of the now shuttered online magazine NewWest.Net. When she’s not writing, teaching or editing, she’s helping her husband wrangle 100 heritage turkeys, 30 acres of food, overgrown weeds or their young children.