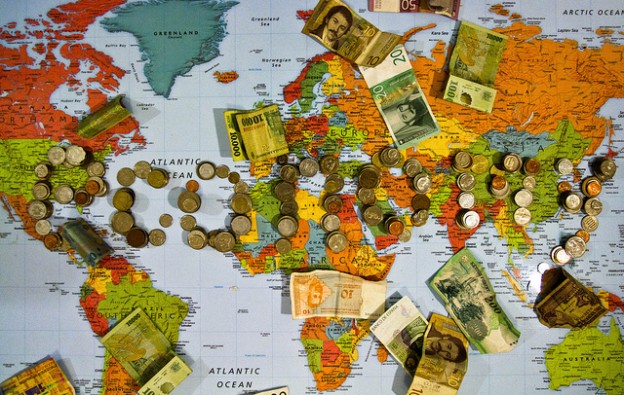 Photo by Aleks on Flickr and used here with Creative Commons license.

"Crowdfunding is going to be a disruptive global influence, but in some cases, not quite in the way you might think."

And while the roots of crowdfunding remain here in the United States, the movement holds much promise and has massive implications for the global economy.

Recently, the World Bank commissioned a study on how crowdfunding could be applied internationally and what its potential could be for affecting entrepreneurship in second and third world countries. It did so by asking Crowdfund Capital Advisors to study the issue, a firm made up of the very people who brought crowdfunding to the fore in the U.S.: Jason Best, Sherwood Neiss and Zak Dorian-Cassidy. The three entrepreneurs spent almost two years rallying support for a crowdfunding exemption from SEC registrations and stood in the Rose Garden in 2012 when President Obama signed the JOBS act into law allowing crowdfund investing in the United States.

The study, which I helped develop, was released in October. And what we found was both expected and surprising: Crowdfunding is going to be a disruptive global influence, but in some cases, not quite in the way you might think.

Here are a few of the most surprising takeaways from the report:

The question the World Bank asked our research team to address was a market size estimate — in other words, how big of a phenomena is crowdfunding and crowdfund investing?

Our team brought in economists with experience in the developing world and created a model utilizing purchasing power parity analysis. Essentially we estimated the income levels needed internationally to allow individuals to invest. We then made very conservative estimates (less than 1 percent of portfolio allocation) and looked at the size of the potential crowdfunding investment market.

The model predicts a $93 billion equivalent crowdfund investing market by 2025.

In the space of only five years, crowdfunding has grown from a handful of sites to nearly 1,000 platforms operating on every continent except Antarctica. Entrepreneurs are using crowdfunding to raise either debt or equity financing for their businesses in 27 countries, and that list is rapidly growing.

The World Bank report built an empirical model to predict in which countries crowdfunding was likely to emerge. We studied a number of economic, regulatory, cultural and normative variables and found that crowdfunding in the second and third world was related to flows of foreign direct investment and diaspora investing.

This suggests that crowdfunding is operating as a vehicle for entrepreneurs to solicit either donations or investments from the extended network of expats, emigrees and organizations seeking to bolster economic development in their home country. One of the most successful examples is OurCrowd, which solicits investments in the U.S. for Israeli technology startups. Homestrings solicits donations from individuals who moved from Africa but want to target donations back into Africa.

Crowdfunding relies on the power or social networks, and since women are more active on most forms of social media than men, it is unsurprising that data shows that women are at least as successful as men in using crowdfunding. While women appear to set lower goals than men, according to Alicia Robb, senior research fellow at the Kauffman Foundation, they are very effective at raising funds through crowdfunding.

It is well documented that professional investors show strong homophily — meaning they invest in businesses led by people who share gender, race, religious and educational characteristics with them. This means that women in the United States receive less than 5 percent of venture capital investing dollars, despite founding more than 50 percent of new ventures. This pattern exists throughout the world, and crowdfunding may represent a significant disruptive influence that can enable women founders to fund their businesses without relying on institutional investors.

Crowdfunding in the Muslim World

Islamic finance imposes strict regulation on the types of contracts that can be used, and this can act as a damper on startup financing. However, scholars have stated that crowdfund investing is compliant with the principles of Islamic finance — which are based on fairness, equitable treatment of all parties, and avoidance of undue obligations. The World Bank report shows that the Muslim world may be one of the first markets in which crowdfund investing may be truly game changing — it is the first new form of Islamic finance to emerge in centuries.

The youth of the Middle East are just as technology savvy as those in the U.S., but the combination of rampant youth unemployment and limited access to capital for companies is curtailing new company formation and in part leading to the instability in the region. Crowdfunding may represent a new vehicle for allowing these smart young men and women in the Middle East to finance their technology firms and create both economic and political stability in this time of crisis and economic despair in the region.

From rural Africa, where crowdfunding is done from mobile device to mobile device, leapfrogging over the lack of wired Internet access, to the offices of NGOs who see crowdfunding as the next step in microenterprise lending (made famous by Grameen bank), to accelerators and universities in South America, Europe and the Middle East, crowdfunding is a new tool allowing the funding of projects and startups. How big it will become is an open question, but for the first time companies can use the power of social networks and social media to directly fund their passions.

Richard Swart is a PhD in Information Systems, an international award-winning academic and a recognized thought leader in the crowdfunding industry. Richard is a founding member of the Crowdfunding Professional Association (CfPA), the Crowdfunding Intermediary Regulatory Advocates (CIFRA), and an early leader in the field. Richard co-organized the first major national conference on crowdfunding and coordinated several educational events on the JOBS Act throughout the United States. He is the Director of Research and Analysis for Crowdfund Capital Advisors (CCA) and works closely with the University of California, Berkeley in the Innovation in Entrepreneurial and Social Finance Program which is dedicated to academic research on crowdfunding.