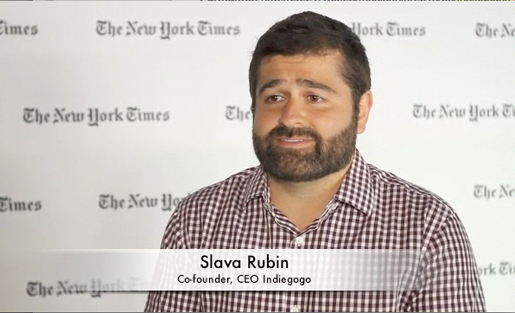 Slava Rubin, co-founder and CEO of Indiegogo, talked about his company's efforts to expand internationally and eventually allow "equity crowdfunding"

Crowdfunding site Indiegogo, launched in 2008, was a pioneer in helping anyone anywhere raise money from anyone in the world. While the site now has much more competition from venture-backed startups such as Kickstarter or niche sites such as CrowdSupply, Indiegogo has recently seen an uptick in high profile journalism-related campaigns. There was the “Crackstarter” campaign (ironically using a play on “Kickstarter” on Indiegogo) by Gawker to raise money for a video allegedly showing the Toronto Mayor Rob Ford smoking crack. Activists tried to counter the Koch brothers by raising money in a quixotic campaign to buy the Tribune Company for $660 million. And literary publisher Graywolf Press raised money to launch a new website.

Perhaps what attracted those campaigns was the platform’s open nature. In a discussion with Indiegogo co-founder and CEO Slava Rubin at the NYT Global Forum, he told me that the site has no judgments on campaigns, no matter how controversial.

"There's no application, no human judgment before you launch a campaign, because we believe the market should be open." -Slava Rubin

“For us, it’s a completely open platform, where it’s what the funders want, they get. We don’t decide, we don’t judge and we leave it up to the market,” Rubin said. “There’s no application, no human judgment before you launch a campaign, because we believe the market should be open. After that, we have to make sure that it’s legal, that it’s compliant with our Terms of Service. In general, we want to keep it as open as possible and limit censorship.”

Below is a video of our entire interview, along with a lightly edited transcript of our chat.

You talk a lot about international expansion, moving into a lot of countries. What about having a physical presence in the countries? Is that important or do you feel like you’ve already grown without that?

Rubin: Indiegogo launched in January 2008 with a presence in San Francisco, and right away in New York. Our headquarters is here in San Francisco, and the amazing thing is that we were already funding in America in English and in dollars, but right away in every country in the world. And it’s really remarkable — without having the currencies or languages [on the site]. Is it important to have people on the ground or offices? It definitely could help. But we want to make sure we’re focused on product first and as we expand, we’re offering things like French and German, and we’ll be coming out with Spanish soon. We’ll have Canadian dollars, Euros, [British] Pounds and more currencies coming soon as well.

The cool thing about Indiegogo is that people are funding projects in other places. But if there were in-person events related to campaigns, would that help in crowdfunding? Have you seen that happen?

Rubin: The number one thing is the aspirational campaign, where someone isn’t sure if they want to do a campaign, and they see someone who’s run a great campaign and say, ‘Oh, I want to do that as well!’ If you’re German and you see someone on Germany raise that money, you’re going to do it next. In terms of events, that’s definitely helpful. Being there in person is helpful, being face to face is always good, whether that’s in New York City or Australia.

We try to do what’s necessary to get the word out, but it’s definitely all about the campaigns.

Speaking of getting the word out, we’ve seen how important it is for the video of campaigns to be high quality. Have you thought about helping to support video creation on the site, helping to produce them?

Rubin: We now have thousands of campaigns each week, and hundreds of thousands since we launched in 2008. And we know that if you have video as part of your campaign, you’ll raise on average 114 percent more money than if you don’t have a video. In terms of helping, our Customer Happiness team is always giving feedback, letting them know how they’re doing. We don’t actually make videos for the campaign owners.

Right now we’re focused on the product and supporting campaigns. There’s a whole cottage industry around, and sometimes people ask me or my co-workers if we know [videographers] and we’ll share some of that insight. But the Customer Happiness team is always reviewing videos, reviewing campaigns, giving you the love and feedback, letting you know how you can improve your campaign.

Why do you call them the Happiness Team? They’re probably not dealing with people who are happy.

Rubin: You’re absolutely right. Which is why it’s remarkable that they’re always creating happiness. We see that touch point, when someone sends in a note, when they think something’s an issue or they need an answer as an opportunity when we’re going to engage with the customer. So we want to take that chance to turn it around and make you happy.

What about crowdfunders who want to get a return on their investment? That was something you had in mind when you first founded Indiegogo. Where are we now with the law around that?

Rubin: There are four reasons anybody funds anything: 1) They care about the person, cause or idea; 2) they want the perks — the product, service or experience in return; 3) they want to be part of the community; and 4) they want to profit — they want to give $1 and get $5 back. When we came up with the idea in 2006, we wanted to do all four right away. But we found out there were regulatory issues, so we thought, ‘Why don’t we skip #4 for now, and go with #1, #2 and #3 right away and see what’s possible.’

Little did we know that in 2012 the Jobs Act was passed and it will allow equity crowdfunding to be legal. But we’re still in a holding pattern now because the SEC still needs to come back with the rules. We’re totally for equity crowdfunding, we’re leaning in and doing research, we’re trying to figure out the plan. It’s hard for me to tell you our plan because we don’t have answers from the SEC yet. It will be interesting because it will create a whole new wave of funders who will enter the market.

Are you familiar with the journalism crowdfunding site Spot.us, which I think started just before you? They had journalists raise money directly from their audience. I’ve seen journalism projects on Indiegogo, like Gawker’s Crackstarter campaign. What do you think of the idea of journalists going directly to their audience for funding?

Rubin: They were after us. I know David [Cohn, Spot.us founder], and no funding platform was around before Indiegogo. I gave him feedback before he got started on starting his platform. It’s interesting that every business is being disintermediated, including journalism. Whether it’s the Rob Ford campaign to get the video, or what’s really interesting is three citizens coming together to do their own journalism, I would say, by creating an ad in the New York Times [see image below] to spread the word about what was going on in Turkey [with the protests]. These were not professional journalists, but they were using words to spread the message about what’s going on in another land, which was really remarkable.

So Spot.us was eventually bought by American Public Media. What did you think about the fate of that startup, and what the future is for crowdfunding journalism projects?

Rubin: I don’t know all the specifics about that company … but we’re seeing all kinds of good things on Indiegogo, whether it be for publishing journalism or other things. There’s macro-campaigns, such as the folks who wanted to buy the Tribune Company. The Koch brothers wanted to spend $660 million on Tribune, and this campaign on Indiegogo was saying ‘We’re the other 98 percent and we’ll buy it for $660 million.’ I don’t know if they thought that would happen, but they did raise $200,000, and it created almost a journalism movement and people were talking about it.

There was also a publishing company, Graywolf Press, that raised $25,000 to move themselves into the next generation of publishing.

The name Indiegogo means to me ‘independent’ or an ‘indie’ type of thing. But then you see these big studios or TV shows that are trying to revive cancelled shows. The idea of who is an indie, who is a studio, who is a corporation, gets turned around. This now has gone beyond independents, right?

One thing that was done on Spot.us was limiting the amount that each person could contribute so that they couldn’t be the entire funder for project. You don’t have limits to contributions do you?

Rubin: It’s interesting how people will come up with different versions of Indiegogo since we started the industry. Some will be focused on a region, a country or a city. Some will be focused on a vertical like journalism or health. Or sometimes different business models where it’s totally free with advertising, or like you’re mentioning where someone can max out on a contribution. For us, it’s a completely open platform, where it’s what the funders want, they get. We don’t decide, we don’t judge and we leave it up to the market.

When you talk about these niche sites, do you see them as a threat that could eat away at your potential business?

Rubin: Quite the opposite. I think it’s super-early in the industry. It’s a massive, massive market that’s hard to even quantify. Everybody’s trying to figure out how to play in it. We were there from the early days, and we’ve been setting up our differentiation in terms of our open, equal opportunity, merit-based [system]…I think it’s great to see all these companies trying to participate.

What do you think about Indiegogo and the plethora of crowdfunding sites? Do you think they can change the equation in journalism funding? Share your thoughts in the comments below.