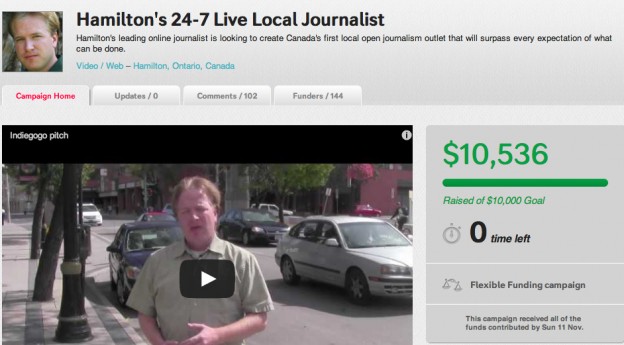 Freelance journalists are exploring crowdfunding as a way to help them chase the stories they really want.

Toronto-based freelance reporter Naheed Mustafa always paid her own way when she reported from abroad. But that meant that about 70 percent to 80 percent of what she earned went straight toward paying for the costs of traveling.

Most news organizations don’t reimburse freelancers for travel costs, and the ones that do don’t offer a lot. Mustafa was looking for a more cost-effective solution, so she turned to crowdfunding platform Indiegogo to raise $15,000 to travel to Pakistan and Afghanistan for in-depth reporting on how its citizens are affected by conflict and war. After two months, she successfully reached her goal and will head abroad this month.

"I think it’s the wave of the future. Consumers are going to pay journalists per item or pay individual journalists because they support their work." -Naheed Mustafa

In a shrinking economic climate, many newspapers are cutting back on freelance budgets and expense reimbursements. Frustrated with this new reality, some journalists have taken financing into their own hands.

Joey Coleman has completed two crowdfunding campaigns, raising more than $20,000 in total,  and used the funds to provide extensive coverage of Hamilton, Ontario, municipal politics. And a Carleton University journalism student is hoping to raise $5,000 to help pay for costs while reporting in Uganda.

These campaigns — and their success — show that the Canadian market is game to pay for quality journalism.

“I think it’s the wave of the future,” said Mustafa.  “Consumers are going to pay journalists per item or pay individual journalists because they support their work. And that’s how people are going to be able to do the work they want to do.”

People are willing to pay, even if they don’t have to

The younger generation may have grown up during an age of “free” news on the Internet, but Coleman said his fundraising campaign shows even they are willing to pay for quality journalism. Many of his contributors were in the 25-to-30 age bracket, and while they mostly chipped in $5 or $10, he said it’s a substantial amount of money coming from a student.

“It’s a real gesture that says to me that the cynicism of, ‘People will not pay for news unless they’re forced to pay for news,’ is incorrect,” he said.

While the average contribution to Mustafa’s campaign was around $50, she was astounded when one contributor gave $5,000 towards her fundraising. “I thought that was pretty amazing to me,” she said, “that people would be willing to give me that much money out of their pocket with no receipt, with nothing back to them except for the opportunity to help out and to read what I come up with.”

Mustafa and Coleman did offer perks for escalating contributions — such as exclusive updates or access to events, and souvenirs from abroad — to provide more incentive to potential funders.

“When someone donates to something like journalism, they’re actually doing that in theory for the benefit of society itself,” said David Cohn, who founded crowdfunding journalism platform Spot.us in 2008. Cohn has since left Spot.us, but the company continues to provide a platform for journalists to pitch and get funding for stories. He says that Indiegogo and Kickstarter are great outlets, but that those parties also keep the rights to accept or reject projects — which can prevent some journalists from getting their projects funded. (Read more on the state of Spot.us here on MediaShift.)

The Tyee, a news organization based in British Columbia, has also embraced crowdsourced funding, but without having to go through a third party. It has offered 16 reporting fellowships totaling $80,000 entirely funded by readers, providing each fellow with a $5,000 stipend for B.C.-based investigations and solutions-oriented journalism. The Tyee also fundraised $25,000 before the start of the 2009 B.C. election and $18,000 in 2011 for more provincial election-coverage resources.*

This year, The Tyee also launched a new “builder” program, where anyone who wants to support the organization can make a voluntary monthly pledge. It’s brought in close to $90,000 so far and has made a big difference in The Tyee’s budget, said editor David Beers.

“That money is probably the most useful to us because we (already) have the basics The Tyee paid for,” he said. “But that extra money from our readers allows us to really bulk up the amount of stories we assign. It really goes into journalism.”

But that’s not to say everyone’s journalism project will find success.

“The reason why you’ve seen people raise large sums of money is because they already have a fan base or they already have an existing community of people that know them,” said Mathew Ingram, senior writer at GigaOm who has written about crowdfunded journalism extensively. “That’s not to say you couldn’t do it without that, but I think it’s a hurdle if you don’t have that.”

Social media campaigning also played a major role in these projects. Mustafa sent out links on Twitter and Facebook to other reported pieces from Pakistan and Afghanistan and explained how her project would compare. Coleman pushed his campaign hard to his Twitter followers, the majority of whom specifically follow him for Hamilton news.

He also credits offering a niche product as a reason his campaign worked. Coleman said if the CBC or the Hamilton Spectator started live-streaming Hamilton municipal proceedings he wouldn’t have succeeded.

In addition to having a well-connected network of supporters, Mustafa said the timing of Nate Thayer’s blog post — in which he blasted The Atlantic for asking him to rewrite his article for free — proved to be serendipitous. “The contributions just started rolling in. It was unbelievable. I think for a lot of people it kind of hit them — that the reality is this isn’t work that’s easy to get funded,” she said. “It isn’t easy to do this.”

Even though both Canadian journalists were able to meet their goals through crowdfunding, neither are looking to do it again as Kickstarter and Indiegogo are meant to be used for one-off projects.

On top of that, “crowdfunding is a really exhaustive model in terms of the amount of time I have to put into it — the amount of promotion I have to do,” Coleman said. So he’s looking to take the momentum from his recent fundraising campaign and convert it into a self-administrated monthly contribution model.

And there has recently been a successful American example that did just that: political blogger Andrew Sullivan left The Daily Beast to go independent with his blog, The Daily Dish, funded entirely by reader subscriptions and raised half a million dollars within a week. Of course, if initial numbers are any indication, The Tyee’s builder program will also be around for a long time. Beers says that “it’s a key footing for Tyee finances going forward.”

Each of The Tyee’s two election funding drives added 4 percent to the organization’s overall budget.

But Mustafa said she thinks people wouldn’t be up for sending her to the same region again to do the same type of reporting. “There might be a sense that once is an interesting and exciting thing to see happen, but twice might feel like I’m trying to get the easy way out.”

Both she and Coleman have ideas of how this type of financing can be harnessed in the future.

Mustafa said crowdfunding could potentially fill leftover gaps in expenses, while Coleman says crowdfunding could go towards paying for high costs of Freedom of Information requests, and thus raise public awareness about the lack of open government.

“The great thing about it is there’s an unlimited opportunity if you see a void that needs to be filled,” said Ingram. “All that matters is that you find other people who care about the things that you want to write about.”