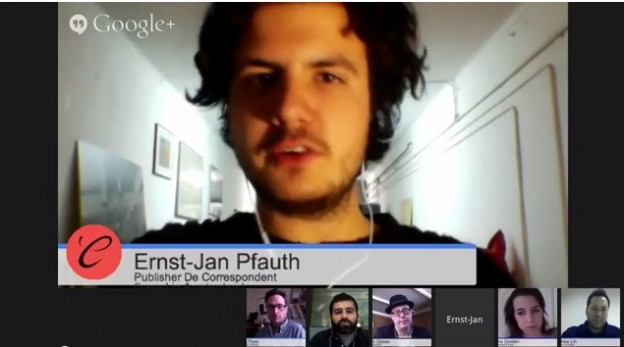 On this week's episode of the Mediatwits, publisher of De Correspondent Ernst-Jan Pfauth joined us to discuss his publication's use of crowdfunding.

As traditional sources of funding for media become harder to come by, many digital media purveyors are turning to a new source: crowdfunding. The fundraising method has gained traction in a diverse cross-section of the industry, from musical productions to news magazines. Using websites such as Indiegogo and Kickstarter, some media initiatives are far surpassing their fundraising goals on those platforms. Is crowdfunding a viable option for media projects to rely upon to meet their financial needs? This week, we’ll chat with guests who have used crowdfunding to kickstart their own projects, as well as Indiegogo CEO Slava Rubin. We’ll also have Ernst-Jan Pfauth of the news magazine De Correspondent; Todd Ruppert, co-producer of the upcoming musical “Happy Days”; and Zak Piper, co-producer of the documentary “Life Itself.”  They’ll be joined by roundtable regulars Andrew Lih of American University and Monica Guzman of GeekWire and Seattle Times, with PBS MediaShift’s Mark Glaser hosting.

R. Todd Ruppert is the Founder and CEO of RTR International Inc.,  a firm with diversified interests globally in the arts, film, distribution, merchandizing, and private equity. In 2012, after a 27 year career, he retired from T. Rowe Price, a global investment management firm. He was board member, CEO and President of T. Rowe Price Global Investment Services, Board member and President, Investment Services of T. Rowe Price International, and member of the operating steering committee of the T. Rowe Price group. He also is the executive producer of three documentary films: A Year in Burgundy, A Year In Champagne and A Year In Port Country. He is co-producer of Happy Days-The New Musical, which will premier in the UK in 2014.

Slava Rubin is CEO and co-founder of IndieGoGo. The service has been used for over 30,000 campaigns and distributed millions of dollars in 200 countries. Prior to IndieGoGo, Slava was a Strategy Consultant leading growth initiatives for clients ranging from MasterCard to Goldman Sachs to Fedex. He started Music Against Myeloma, an annual charity event raising funds and awareness to fight this rare form of cancer. Slava is also an advisor to Ubershare and Romper Games.

Ernst-Jan Pfauth is the former Editor-in-chief of Internet at NRC Handelsblad, as well as an acclaimed technology author and columnist who has written two books on blogging. In 2008, he co-founded The Next Web Blog, which is now amongst the ten most-visited blogs of the world. At De Correspondent, Ernst-Jan serves as publisher, fostering the expansion of the platform. Follow him on Twitter @ejpfauth.

Zak Piper is an independent Producer, Director, and Sound Recordist who, until 2013, served as Kartemquin’s Director of Production and was on staff for more than 10 years. Most recently he co-produced the critically acclaimed filmThe Interrupters, which premiered at the 2011 Sundance Film Festival. Currently, Zak is producing Life Itself, a film based in large part on renowned film critic Roger Ebert’s acclaimed memoir of the same name. Zak is also producing 63 Boycott, a film that chronicles the Chicago School boycott of 1963 when more than 200,000 Chicagoans marched to protest the segregationist policies of CPS.

This year has seen a crop of media projects crowdfund staggering amounts of capital. Just this May, NPR’s Planet Money raised ten times its $50,000 goal to track the production of a T-shirt around the world. And in March, the Dutch news outfit De Correspondent raised $1.7 million before it even created its site. Recently, the producers of the upcoming musical “Happy Days” and “Life Itself” have raised over $250,000 and $60,000, respectively. What’s striking about these projects is that they are created by established figures in the industry. De Correspondent’s founder, Rob Wijnberg, had already become a known journalist in Holland before announcing his campaign on national television. “Happy Days” co-producer Amy Anzel has produced a variety of musical productions in the U.S. and U.K., and “Life Itself” producer Steve James has award-winning “Hoop Dreams” under his belt. Plus, there’s a CNBC show, “Crowd Rules” about crowdfunding and the A&E cable network partnered with crowdfunding site RocketHub to seed startups. Now that crowdfunding has gone mainstream, does this mean less opportunities for smaller players? Will this financing method continue to grow in the media industry? What are the drawbacks and benefits of finding funding in this way?

2. Choosing between the plethora of crowdfunding platforms

As use of crowdfunding has increased, so has the number of platforms. Besides the widely-known Kickstarter and Indiegogo, there are RocketHub, Crowdfunder, Crowdrise, Fundrazr, Peerbackers, Fundable, Seedrs, and many more. While each site has its own set of rules and fees, a key differentiating factor between these websites is whether they are donation- or investment-driven. Most popular sites, like Indiegogo and Kickstarter, are donation based: the crowd donates various amounts of money to campaigns, expecting no returns on their investments except for perks. But a raft of newer sites allow the crowd to invest in campaigns and become shareholders. This sort of crowdfunding is in flux as the 2012 JOBS Act is slowly being implemented, creating new regulation of investment crowdfunding or “crowdfinancing.” How will the growth of investment-based crowdfunding change the nature of this strategy? Will the federal regulation of crowdfunding portals stunt their growth, or just make them safer for participants?

One response to “Mediatwits #104 Special: Crowdfunding the News, Musicals, Documentaries and More”