How the SEC Listened to the Crowd for Crowdfunding Rules 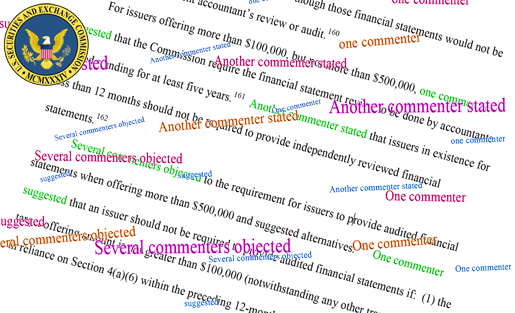 In the proposed rules for "Regulation Crowdfunding" it's clear that the SEC listened to the crowd.

Last month, the Securities and Exchange Commission published its long-awaited proposed rules for the most radical part of the JOBS Act of 2012. These rules set the terms for what’s called Regulation Crowdfunding, under which the general public will be allowed to invest limited amounts in small, unregistered securities. Regulation Crowdfunding represents one of the most momentous changes in U.S. federal securities laws since the Securities Act of 1933, which first established our legal framework for selling investments.

"Regulation Crowdfunding represents one of the most momentous changes in U.S. federal securities laws since the Securities Act of 1933, which first established our legal framework for selling investments."

What’s remarkable is the way that the SEC wrote these rules. How much they draw from the crowd and how they’re framed represent another big change in how the SEC is open to working and that has implications for the future of the crowdfunding movement.

The JOBS Act gave the SEC the power to change many of its specifics as written, but the SEC’s proposed rules generally adhere to the original legislation. You can read a great outline of the rules, written by Kevin Laws of the startup platform AngelList, here. The main points are that people can invest between $2K and $100K annually in Regulation Crowdfunding offerings, via online “intermediaries” (platforms), while people issuing the investment can raise up to $1 million per year. Issuers must follow rules that include limiting any discussion of their offering to the intermediary platform and completing and maintaining filings such as résumés, recent tax returns if any, investment risks, the expected use of the investment proceeds, and full financial statements. For issues of over $100K, the financials must be formally reviewed or audited by a CPA.

The intermediaries, for their part, can be either traditional brokers, or else crowdfunding-only “funding portals” — a new legal category. In the latter case, they cannot handle money directly and also cannot recommend investments. But they are permitted to let users search, filter, and feature investment listings based on declared objective criteria. Wisely, the SEC also requires intermediaries to support open communication for the discussion of investments — a provision that had been in the original JOBS Act bill, but was inexplicably removed by the Senate.

As people have processed this 585-page document and set summaries of it percolating through various startup and investor communities, there’s a significant meta-aspect that’s only apparent from the primary source: a lot of this document came from the crowd. That’s what makes it so long. The proposed rules aren’t bloated with obscure bureaucratese and proceduralism, as some automatically assumed in reaction to the 585-page figure. On the contrary, much of the proposed rules’ bulk is dedicated to discussing comments that members of the public sent to the SEC over the past year and a half. And the SEC report doesn’t just list the public’s comments; it actually engages with them, summarizing their points and weighing them against one another in a well-considered rationale that’s written clearly and accessibly. Paging through the document, you’ll see that its most frequently used phrase is probably “Another commenter suggested…”

Furthermore, the SEC explicitly solicits additional input from the public, with 295 “Request for Comment” questions. Public comments on the proposed rules are rolling in now, and as with the previous set of public comments, they’re coming from experienced entrepreneurs, investors, regulators, crackpots, and everyone else. The most substantive and helpful that I’ve seen so far are from Paul M. Niederer, the CEO of the pioneering crowd investment platform ASSOB, which has been operating in Australia since 2005 with an impressive record of success and zero fraud. A grateful nation thanks you for your detailed consideration, Mr. Niederer.

Looking at the SEC’s proposed rules as a whole, it’s impressive and refreshing to see a government report that’s so in sync with the crowd. We’re all in there, cited and footnoted, anyone who took the time to tell the SEC how they think Regulation Crowdfunding should work. This is what democracy looks like. The SEC gets it; they value the wisdom of the crowd. On October 23, the day the report was released, SEC Chair Mary Jo White wore a bright green blouse, like a “Go” signal, and said that she wants this new Regulation Crowdfunding market to thrive. I believe her.

Will The Rules Work?

But the big question remains, how much will the Regulation Crowdfunding process cost a deserving small business, and will it be worth it? The SEC estimates starting costs at ~$10K and ongoing costs at $15K per year, including the first year, for companies raising more than $100K. It remains to be seen how many will make the business decision to go this route for funding, as opposed to trying and succeeding through other mechanisms like private equity or bank loans.

The portals, of course, will want to lower the cost of Regulation Crowdfunding by automating and scaling, creating a “Turbotax for Startups” experience in which all filings, signatures, audits, and other professional services are streamlined into the process. If they are successful in doing this, I predict that Regulation Crowdfunding should take off in its current form. But if it isn’t feasible, then it won’t — at least until the laws and regulations are changed.

But even if the effort and expense of federal Regulation Crowdfunding doesn’t make sense for many businesses, a parallel movement at the state level, less well-reported but potentially more significant, is making it even easier for entrepreneurs in some states to raise investment money from the general public within their state. Crowd investment exemptions have already become law in Kansas (August 2011), Georgia (December 2012), and Wisconsin (November 2013), with the first successful raise completing last month, for Bohemian Guitars in Georgia, on the portal SparkMarket. Similar bills are currently before the legislatures in Washington, North Carolina, and Michigan, with Michigan expected to pass by the end of this year. I expect and hope that many more states will follow this trend.

Paul Spinrad is a former editor at MAKE and Wired magazines, and a crowdfunding thought leader who catalyzed the movement for the JOBS Act’s crowdfunding provision. He began his career as a software engineer for government and business applications.