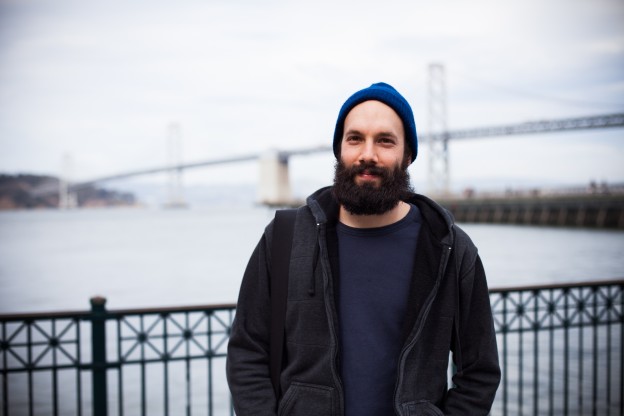 Jack Conte, co-founder of Patreon, is a musician aiming to more adequately compensate artists of all types.

Jack Conte has upwards of 160,000 subscribers to his YouTube page. Each of his uploaded music videos are viewed at least 100,000 times, which comes to a whopping million monthly views. Yet advertising revenue from his YouTube brand earns Conte a mere $50 a month, he says.

Conte’s situation stands for the plight of so many modern-day content creators of all genres.

“I find myself watching creators online and being moved to tears by their talent. Until now there’s never really been a way to vindicate that feeling, never been a button you could press to compensate them in that moment.” -Jack Conte

Click the image for the full series. Photo by Nick Heer on Flickr and used here with Creative Commons license.

“It seems very strange to me,” he said. “We’re talking about a football-sized field of fans who love someone’s content, can’t wait to see the next blog or make the next recipe. And the artist is making maybe $50 a month off of it. It’s outrageous, and actually it doesn’t add up at all.”

This frustration led Conte to co-found the startup Patreon in May. The site’s mission is to enable artists of all sorts — be they musicians, authors, comic book writers, photographers — to be more adequately compensated for the great works they’re contributing to the world. The fans can provide the level of financial backing they feel comfortable with to reward the artist and ensure he or she keeps creating.

Lately a number of startups like Patreon have popped up with donation models at their core. Public media organizations have long held pledge drives to tap into their listeners as sources of financial support. Now writers and other content creators are leveraging new resources to do the same thing.

The popularity of crowdfunding has paved the way for fans to compensate artists and authors in new ways. Tipping, not just to start a single project but along the way, is one avenue gaining particular traction.

“I find myself watching creators online and being moved to tears in some cases by their talent,” Conte said. “Until now there’s never really been a way to vindicate that feeling, never been a button you could press to compensate them in that moment.”

Patreon, he says, is serving as that button, metaphorically speaking. The way it works is the creators set up profiles on Patreon’s site, explaining their work and offering up samples. Then anyone can sign up to become a patron and give a set amount each time the creator releases a new piece of content.

The difference between Kickstarter or Indiegogo and Conte’s startup is timing. Crowdfunding assists in allowing a writer or artist to begin a single pursuit like a book or album in a one-time gathering of money. Patreon provides a mean to tip someone who’s constantly putting out new material and, therefore, to earn a steady stream of revenue. The average amount patrons give online is $6 per new post or piece.

“I’m releasing new things on a monthly basis. I have friends releasing material weekly,” Conte said. “They’d have to almost invent an excuse to raise money after going on Kickstarter once. We’re saying, ‘No, no. Don’t make up a new endeavor. Keep doing what you do best and let people pay you each time you do that.”

Rewards, as they are in crowdfunding, are also a major part of the Patreon mix. When a fan gives $5, for example, in exchange for every new piece of writing by an author, that fan could win personal access to that author or a sneak peak at future chapters.

The rewards are set by the content creators being tipped. Some will give out their personal cell numbers, engage in Google Hangouts with high-donating fans, play an online game with patrons or even provide behind-the-scenes production diaries. Really, the reward depends on the medium and what will coincide best with fans’ interests, according to Conte.

At this point there’s essentially no barrier to entry for content creators, so Patreon has 2,500. Of those, many come from YouTube and are doing more visually creative pursuits like film or video. They’re not the outright stars and household names gaining fame, but the hardworking creative individuals with more of a midrange number of niche followers seeking to earn a living at their craft, Conte says.

In this way, Patreon is making it possible for a newly created category of small business artists to sustain themselves monetarily.

Writers, bloggers and authors make up a fraction of the content creators at this time. However, Conte’s out to change that. Investigative journalists, he believes, could use the platform to monetize and showcase important longform work.  Authors of larger novels could — and to a certain extent do — put out sections and chapters gradually, allowing their readers to tip on each of these intervals.

“We really, above all, want to empower creators, to help them make what they want to make and say what they want to say,” he said. “With a transition to digital they have the publishing tools and the ability; it’s just about financing it. We want them to stay independent if that’s their desire.”

Adding on funding to an existing author-reader community

Unlike Patreon, Wattpad has been in existence — and has been helping authors and readers engage around content — for years. Fan funding, though, is a new experiment for the otherwise free site.

Canada-based Wattpad, which went live in 2006, was designed to be the YouTube of storytelling and e-books. The site is its own community of authors of all levels and readers of fiction who crave new stories they can sink their teeth into, according to Wattpad’s marketing manager, Amy Martin.

At this point, 22 million stories have been uploaded. Beyond showcasing writing, the platform stands out for its social components. Readers can message with their favorite authors, have say-so in the content of books as they develop, and get alerts when a new chapter is posted to Wattpad.

Martin said trying out fan funding is an extension of this. In the first trial, six established authors who have consistently published their writings on Wattpad and gained followings, were selected to take part.

Each writer will pitch a project idea — which can be the next story in an ongoing series, the creation of a physical print book, etc. — and then ask for funding from fans. If the author meets his or her donation goal the project goes forward, much the way mainstream crowdfunding networks function.

“It’s really a test to see if the social graph we’ve built up can translate into fundraising for these authors who’ve built up connections with their fan base,” she said.

Giving to writers and giving back to charity

Len Kendall is one of the co-founders of new startup CentUp.

Another recently launched startup, CentUp, is after a similar goal of supporting — through donations — writers and others who are creating original content.

Len Kendall and his two co-founders came from the advertising world and began to notice increasingly that ads were taking over websites and everyone was paying indirectly for the content displayed via means like the sale of data.

“We wanted to revert back to a simple exchange of value where users pay for stuff that they view as really good,” he said. “Now seemed like the right time because people are finally starting to pay for content.”

CentUp’s biggest twist, though, is the addition of social good. When fans click on CentUp and elect to compensate a creator, half of their donation goes to the creator and half to a charity of their choosing.  Kendall thinks building social impact in will further motivate fans to fork over their dollars.

“We’re using charity to reduce contemplation and make people feel good about this behavior,” he said. “Yes, people can independently give to charity. And yes, they can use PayPal and independently donate to things. Fusing them together will trigger this to actually work.”

The other difference is how fans tip. CentUp is set up as a button on authors’ individual websites as opposed to grouping all of the content creators on the startup’s platform. So far, CentUp is deliberately starting small to grow gradually. Six charities were selected initially, and the co-founders are approving all content creators who want to put a button on their site to verify that they’re the originators of the work and that it’s of an inoffensive nature. At this point there are about 100 approved, and the button is on close to 175,000 pieces of content.

Eventually, Kendall wants a CentUp button on every blog on the Net so that users are as familiar with it as a Facebook or Twitter icon.

Writers, from the start, have been a major emphasis. As such, bloggers and authors are a part of the CentUp community.

“Writing is often the hardest form to monetize,” he said. “It’s something that anyone can do, and there’s a lot more writing out there. So we want to reward those doing it well.”

So far, the average donation amount is on the low end — 25 cents. When authors join the network, Kendall sends them a nearly 40-page memo with hints about how to best interact with would-be donors and expectations. For instance, at this point a writer is likely not going to get rich from tips earned on CentUp. However, there are other tangible benefits.

“Besides money, they’re able to understand who their biggest fans and supporters are and to create unique relationships with them,” he said.