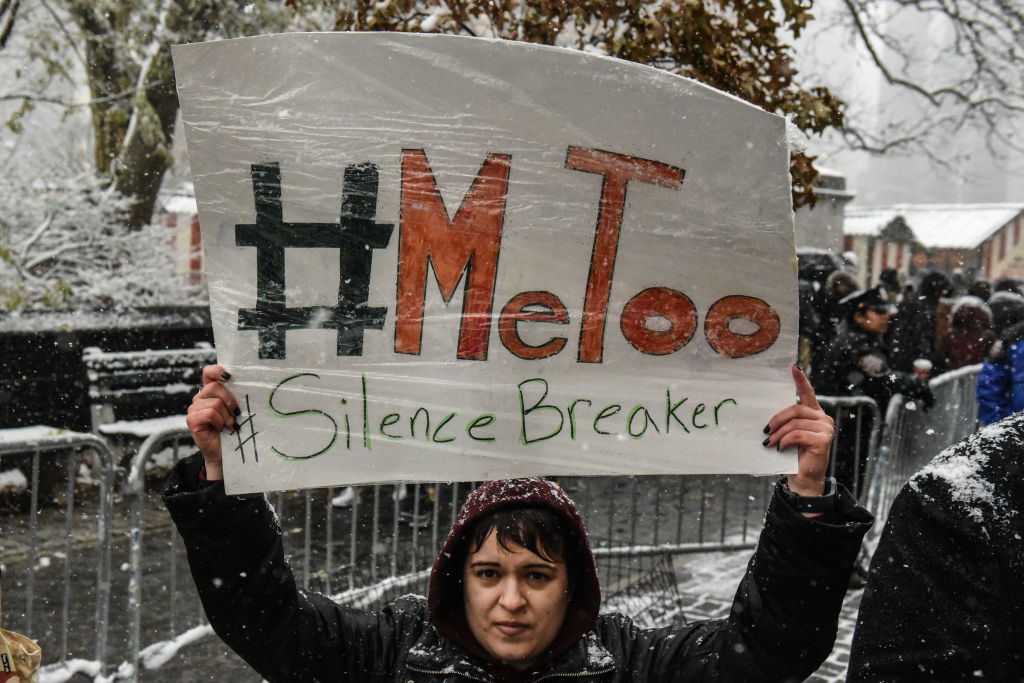 A #MeToo protest outside Trump Tower in Manhattan on Dec. 9, 2017. Photo by Stephanie Keith / Getty Images

We thought 2016 was a crazy year for the media industry, but somehow 2017 proved to be even more so. From President Donald Trump threatening members of the press to the tech platforms revealing they’d sold advertising to Russian operatives trying to sway the electorate, there was never a slow news day. Below are 10 of the biggest media stories from a year of very big stories.

In early October, two stories in the New York Times and the New Yorker detailed allegations that Hollywood executive Harvey Weinstein had sexually harassed and assaulted women for decades. The number of accusers continued to grow, and now more than 80 women allege that he harassed them.

Days later, BuzzFeed published a story about the “Shitty Men in Media” list, a Google spreadsheet that listed unsubstantiated claims from anonymous women reporting misconduct by men in the New York City media scene. As a result of that document, a number of news outlets investigated and fired some of the men who were named.

Later, actor Alyssa Milano encouraged Twitter users who have been sexually assaulted or harassed to post “me too” a phrase first coined by activist Tarana Burke, in order to demonstrate the degree of the problem.

If you’ve been sexually harassed or assaulted write ‘me too’ as a reply to this tweet. pic.twitter.com/k2oeCiUf9n

Call it a reckoning, the Weinstein Effect or the #MeToo Movement, but the intersection of these moments led to an important cultural shift with many victims of harassment opening up about their experiences on social media. Decisive and swift action was taken against several high-profile men across several industries accused of sexual harassment. In the media world alone, a partial list of fallen men includes Charlie Rose, Mark Halperin, Matt Lauer, Glenn Thrush, Bill O’Reilly, Vox’s Lockhart Steele and Vice’s Jason Mojica.

Time Magazine chose “The Silence Breakers,” the women and men who have spoken up about sexual harassment and misconduct, as its Person of the Year. The year ended with the Hollywood and media industries banning together to form the Commission on Sexual Harassment and Advancing Equality in the Workplace, which Anita Hill will chair.

2. Trump vs. Media: “Enemy of the People,” Restrictions on Press Freedom

Though he declared war on the media long before he was elected, Donald Trump ramped up his efforts this year to attack and censor the press. Among the lowlights: Throughout the year, he repeatedly cried “fake news!” on his Twitter account, toyed with the idea of moving the press corps out of the West Wing, called the media the “opposition party,” called for a Senate investigation into news outlets for their unflattering coverage of him and demanded a Washington Post reporter be fired for a misleading tweet.

There was also this strange scene of Trump meeting with the children of the White House press corps on Halloween when he told the kids they had no weight problems.

Prediction: There’s no sign of Trump changing. We fully expect the president to continue antagonizing the press for the rest of his term.

In mid-2016, Mashable made headlines when it fired about 30 members of its editorial staff in favor of a “pivot to video” that was expected to bring in higher revenues. This year, several other digital publishers, including MTV, Mic and Vocativ, followed suit. (See a comprehensive list from AdWeek here.)

It now seems as though the rush to video was a bit rash, with the high cost of video production perhaps not thoroughly taken into account. Mashable’s experiment seemed especially flawed: the tech blog was sold to publisher Ziff Davis for $50 million, a huge discount from its $250 valuation just last year. What was the pivot to video became a very harsh pivot to reality at the end of this year.

Prediction: Hindsight is everything. It seems obvious now that pivoting to video could not be the one-size-fits-all fix for declining ad revenues. We expect publishers will experiment with new means of building revenue, but will be a bit more cautious before jumping into new trends.

By the end of this year, Facebook and Google are expected to account for 63 percent of the digital advertising industry, leaving struggling publishers forced to find new revenue opportunities (see the pivot to reality above).

This year Facebook and Google both dealt with the fallout from revelations that they were using inflated metrics when billing advertisers. Things really came to a head when we learned that Facebook, Twitter and Google had all allowed Russian operatives to buy advertising that sought to influence the 2016 election. Members of the U.S. Senate announced a bill that would regulate online political ads.

“You have transformed the way we do everything from shopping for groceries to growing our small businesses,” Sen. Mark Warner (D-Va.) told representatives of the three platforms. “But Russia’s actions are further exposing the dark underbelly of the ecosystem you have created.”

Authorities throughout Europe have also begun taking steps to regulate the tech giants.

Prediction: This was the year we learned that tech giants exercise so much power they don’t even understand what they’re capable of. After the Russian ad scandal, we expect the platforms to continue to add moderators and AI to catch perpetrators and fakes. And the U.S. government could move forward with legislation, including the Honest Ads Act, which seeks to provide more transparency about online political ads.

The trend of people dropping pay TV sped up in 2017. In just the third quarter of the year, the top companies in the pay TV industry lost more than 400,000 subscribers, double that of the same period last year.

ESPN was hit particularly hard. The company laid off about 100 employees, including 10 percent of its talent, as part of a plan to move toward digital distribution. ESPN had joined TV streaming services like Hulu and YouTube as part of skinny bundle packages, but that didn’t counteract the number of viewers leaving its own paid services, according to a CNBC report.

And if you still haven’t jumped on this trend, here’s our updated Guide to Cutting the Cord.

Prediction: The cord cutting trend shows no signs of slowing down. Most likely, more TV providers will band together to provide more skinny bundle options for consumers, and look out for Disney’s new offerings or revamped Hulu to take on the streaming giants.

Jonah Peretti of BuzzFeed speaks onstage at the TechCrunch Disrupt NY 2013 at The Manhattan Center on April 29, 2013 in New York City. Photo by Brian Ach/Getty Images for TechCrunch and used here with Creative Commons license.

Expectations for a 2018 BuzzFeed IPO were dashed when the millennial-focused site failed to meet its revenue targets this year. BuzzFeed also laid off 100 staffers as part of its plans to rearrange its business units and focus on building new revenue streams, as detailed in a memo from CEO Jonah Peretti.

But it wasn’t just BuzzFeed that fell short. Other sites, including Vice and Refinery29, struggled in the challenging digital ad market. It seemed that Bustle was the only digital native publication doing well: It said it’s on track to increase its 50 percent target revenue increase and the site’s founder Bryan Goldberg has plans to acquire other sites next year.

“Now is this critical make-or-break moment for the industry where digital media needs to consolidate,” he told the Wall Street Journal in November. “Few are in a position to do this, but we feel we have had significant growth and significant access to capital to make this happen.”

Prediction:Digital publications may be struggling, but the smarter ones will pull through the slump by coming up with diverse revenue streams. BuzzFeed has already been experimenting with e-commerce and is seeing some good results.

Early in the year, more than 250 brands pulled their ads from YouTube after they were being placed next to extremist content. YouTube made amends, but the platform made headlines again in November when artist and writer James Bridle publicly called YouTube out in a Medium post for allowing the spread of disturbing and graphic content that targeted children. Advertisers were again spooked, leading YouTube to crackdown on the content it allows: it terminated hundreds of accounts, removed hundreds of thousands of videos and removed ads from nearly 2 million videos and over 50,000 channels “masquerading as family-friendly content.”

One of the most notable accounts to be banned was Toy Freaks, a channel run by a dad who posted videos of himself terrorizing his young daughters.

Prediction: Something else that became clear about platforms this year: They’re not very good at moderating content and ads that users post and buy. We expect the platforms, YouTube included, to invest more resources into moderation in the coming year.

eBay founder Pierre Omidyar, who is also behind First Look Media, committed $100 million to address a “global trust deficit.” Beneficiaries of the Omidyar funds include the International Consortium of Investigative Journalists, the Anti-Defamation League and Alianza Latinoamerica para la Tecnologia Civica. Craigslist founder Craig Newmark also supported the News Integrity Initiative, an effort that includes Facebook, CUNY’s Graduate School of Journalism, and others that will support journalistic projects, including those that fight fake news.

The Knight Foundation said that it would give $1 million to 20 projects that are specifically designed with the goal of fighting misinformation.

Prediction: There’s some debate over whether philanthropy is the right answer to saving journalism. But there are certainly upsides to it, and we’re in favor of more experimentation to see how non-profits and the media can work together.

The “Trump Bump” that began late last year continued well into the new year, with many media outlets pointing to the election of Donald Trump as the reason that their subscription numbers had grown. Slate, for example, saw a 65 percent increase in subscriptions within three months of the election. Several news organizations attempted to sustain the Trump Bump by developing digital campaigns alluding to the President or fake news in some way, like CNN’s “This is an Apple” ad or the New York Times’ “The Truth is Hard” commercial. The Times in particular enjoyed an increase in subscriptions and ended the year with more than 3.5 million subscribers.

Prediction: Most likely, the Trump Bump will soon taper off. But publishers who find new ways to sustain interest from readers interested in political coverage will fare well.

As we reported earlier this week, 2017 was another big year for collaborations. The Panama Papers, a huge 2016 collaborative investigation into the secrecy of offshore tax havens, won this year’s Pulitzer for Explanatory Reporting. That project was followed up with an encore this year: the Paradise Papers involved 94 media partners working together to analyze 13.4 million files. See our full list to learn about other collaborative efforts including Documenting Hate, 100 Days in Appalachia and more.

Prediction: At the moment, we see no downsides to collaboration among news organizations. Projects like the Paradise Papers and Documenting Hate exemplify what is possible when groups work together. Expect more of the same in 2018 and beyond.