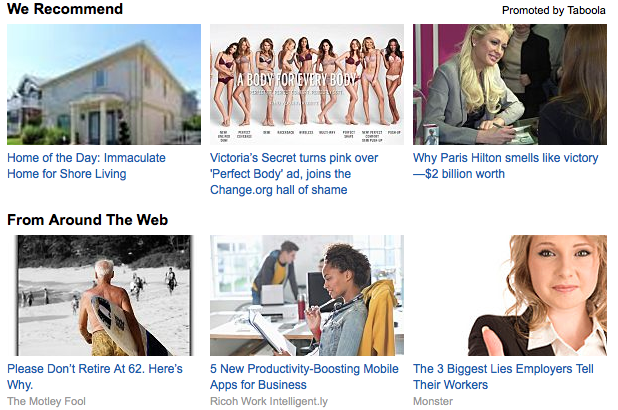 If you thought there was a flood of content last year, just wait. The good news, though, is that more of the good stuff will rise to the top.

"Until the major tech platforms, and maybe the major TV networks and publishers can agree, I don’t see a consistent way of measuring traffic (as much as I think the time-based concept holds promise)."

And along with the content, expect more tracking of the people consuming it, but less agreement on how to measure exactly what they’re doing.

Here, then, are some predictions for the media and technology businesses in 2015.

2014 saw a flood of content created for marketing. This year, I believe, we’ll see a separation of the good and the less-so.

Top-flight publishers will start to doubt the economics of sending users off their site for pennies per click via questionable headlines promising financial fortune, or “news” on Paris Hilton and Victoria’s Secret models. (See the image above, right, for just one example.)

“People use sensational words to get attention to their writing. But if it’s consistently sensational, people stop paying attention,” publisher and investor Om Malik said at the Digital Content Next (DCN) conference on content marketing this fall in New York. Over time, “people respond to consistent and reasonable arguments,” he said.

Plus, the real money — and the real margins — for publishers comes from creating sponsored content that matches their brand, that can be placed in stream, and that shows equally well on large or small screens.

Well-crafted sponsored content isn’t cheap but well-crafted and intelligently sold, it brings well more than the pennies-per-click model the content marketing platforms offer. And, done well, those ads can have great effect — as The New York Times showed with its native ad for Netflix’s “Orange is the New Black.”

Tracking Across Screens and Devices

One of the biggest quandaries for marketers and publishers has been tracking users as they move from one screen to another.

By having users’ logons, whatever device they’re on, the social networks can promise advertisers they’ll be able to identify those users and attribute their usage and ad exposure across screens.

That potentially solves multiple conundrums: how to tell if someone has logged on multiple times from a mobile browser that doesn’t allow persistent cookies, how to tell if the same person is on multiple devices, and how to get location-based data.

For media companies, it’s an opportunity to ally with the social networks — more of whom are expected to offer consistent tracking — but also could be a quandary by allowing those platforms to gather ever more data on the publishers’ consumers.

Advertising Across Devices, Too

Along with the cross-device tracking comes the opportunity to serve more targeted advertising and offers — and the ability to make more money from media served on mobile devices.

While publishers now see as much as 50 percent of their traffic on mobile, they have not been able to show enough ads at high enough prices to make a profit, nor have they gotten people to pay.

But media buyers responsible for placing ads are increasingly asking for mobile as an explicit component of their plans, and publishers will have to accommodate them. One way to do that is to make sure the advertisement shows on whatever screen someone is on.

If publishers can promise that, they can try to charge top dollar, bringing up the levels of spending they’ve seen on mobile devices, by charging consistent rates overall.

“We introduced a product in April that has an algorithm [that] allows an ad to run on whatever device” someone is consuming video on, Bill Day, CEO of the Tremor Video advertising platform, said at the recent UBS Global Media and Communications Conference in New York.

That offering, he said, already accounts for a third of his company’s revenue.

Video: More of It, More Ads

The flood includes video. Expect even more this year.

Netflix Chief Content Officer Ted Sarandos at the UBS conference promised the company would release an average of one new show every 2.5 weeks in the coming year, and is currently in various stages of producing nine original series.

He said the company was getting into “kind of a regular drumbeat” of letting subscribers expect original content (and, by extension, continuing to subscribe so as not to miss anything).

Among the many other execs who cited Netflix at the UBS conference, Time Warner CEO Jeff Bewkes spoke ebulliently about his company’s plan to offer HBOGo for people without cable subscriptions — claiming a potential market of 10 million to 15 million new homes.

There will be more video advertising in 2015, too. Advertisers who are very comfortable placing ads on TV — a predicted $70 billion in 2015 — are still paying top dollar to place similar ads in digital video.

That’s one reason Yahoo became the latest major portal to acquire a video advertising platform with its $640 million acquisition of BrightRoll, hoping, no doubt, to compete with AOL’s Adap.TV, and YouTube’s continued investments to gain viewership for quality programming.

Sarandos and Bewkes were just two of the executives at the UBS conference and other gatherings to call current measurement metrics into question.

Pravin Chandiramani, SVP Business Development of measurement and advertising company Simulmedia, talked of the need to go beyond the “crude metrics” that are currently used to measure TV viewing and advertising.

Mary Berner, president and CEO of the Magazine Publishers of America, said at the UBS conference that traditional metrics for measuring magazines didn’t do the publications justice.

Other executives said the measurement cookie is dead, since it can’t really be tracked across screens, or even across sessions on mobile devices.

The problem, though, is finding universally agreed metrics that advertisers and others can agree to adopt as a common currency that helps everyone compare value across media.

There’s no simple way, as just one simple example, to correlate “engagement” in Facebook or Twitter, both of which offer their interpretation of the term to advertising buyers.

A few other publishers are measuring “time.” The Financial Times is in 2015 launching web-based advertisements it will sell based on the number of seconds the ad is in view.

There’s also the conundrum of fraud, and the difficulty of keeping any consistent, technological measurement solution from being overrun by bots.

“Fraud’s going to be here forever,” Jonah Moat, CEO of measurement company Moat, said at a DCN gathering on time-based media measurement. “Any metric that we come up with, that the industry comes up with, can absolutely be faked.”

The National Association of Advertisers recently reported that up to 50 percent of publisher traffic is artificial bots, and that fraud accounts for $6.3 billion of the $43.8 billion to be spent on digital advertising this year.

So, what’s my prediction? Sorry to say, I see more confusion. Until the major tech platforms, and maybe the major TV networks and publishers can agree, I don’t see a consistent way of measuring traffic (as much as I think the time-based concept holds promise).

Expect this year to see talk of regulation on Net neutrality, drones and privacy. But our paralyzed government will see to a lot less action than words. So, new regulation is a wash.

Wearables, too, have gotten a lot of press. Apple CEO Tim Cook gave an impressive presentation of the Apple Watch, and the company that popularized the music player could also make wearables the thing.

I think, though, that we’re still a few steps away. Native apps won’t be ready on the device until well into the year, and — unlike the original iPods that launched the iTunes ecosystem — the devices can’t be used by someone who doesn’t already use an Apple device.

Google Glass, too — at least the times I’ve tried it — is still a little too glitchy to capture the mainstream.

We’ll probably see a day when wearables are as much a part of our lives as cell phones are now. There’s just too much circling around the space for something not to take hold. But I don’t think that day will come in 2015.

An award-winning journalist and MBA, Dorian Benkoil (@dbenk) is founder of The MediaThon, a hack-a-thon for media makers, and Teeming Media, a digital media management and research consultancy focused on publishers and media tech. He developed and executed sales and marketing strategies for PBS MediaShift.