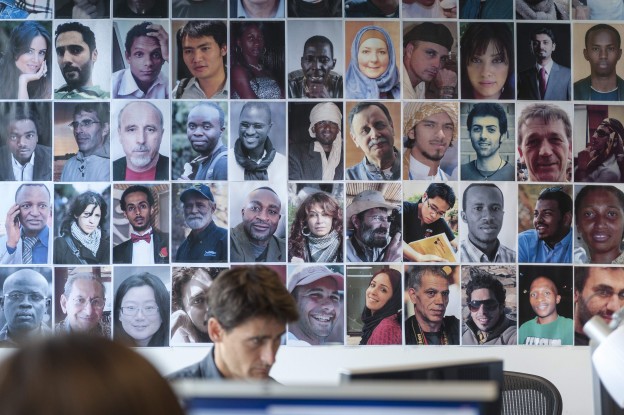 The rapid spread of online misinformation was voted one of the top 10 trends facing the world in 2014 by members of the World Economic Forum’s Network of Global Agenda Councils. In this third installment in the PBS MediaShift series on the 2014 Trends in Newsrooms report, Julie Posetti and Craig Silverman report on social media verification trends. Read the other installments here: Part one, part two and part three.

The communal and rapid-fire nature of many social media platforms creates the potential for errors and falsehoods – an emerging practice in conflict-related propaganda – to go viral.

“The next big thing is not attention; the next big thing is trust,” Eric Scherer, the director of future media at France Television, told the International Journalism Festival in Perugia in May. If trust is the most important factor in developing relationships between audiences and news producers, verifying material that comes from social media takes on even greater importance as a way to ensure the credibility and reliability of journalists and their content.

Newspapers, in particular, have built up trusted brands and relationships with their communities over decades, if not over hundreds of years. Part of that trust flows from people knowing that what they see and read is credible information that has gone through a verification process.

Can the process of verification evolve in the manner of a radio news story, filling in blanks over time, with details unfolding hour by hour? Can it be crowd-sourced, with news media consumers or “co-producers” acting as widely distributed fact-checkers with collective expertise? And what standards of verification and accuracy do audiences expect of professional journalists in the social media sphere?

A shift by some journalists and newsrooms towards what has become known as “open verification” (popularized by U.S. National Public Radio’s former social media editor Andy Carvin during the Arab Spring) is now becoming more widespread. But it remains contentious because it involves publishing unconfirmed information, with an invitation to the journalist’s social media community to help with the verification process.

The New York Times’ public editor Margaret Sullivan recently said, in an interview with the World Editors Forum, that Twitter is “so closely intertwined with news now that it’s hard to imagine journalism without it.” She highlighted the need for “old fashioned double-checking and transparency,” while also pointing to the value of third-party services like Storyful — the outsourced verification service used by The New York Times, ABC News and others — which has recently proven its value in the form of a $25 million News Corp. acquisition.

But Sullivan has issued a warning that no journalist or newsroom can afford to ignore.

“We have the ability to get news out faster than ever, but we’ll break it all if we don’t verify and get it right,” she said during a keynote address at the Perugia International Journalism Festival.

There are two key elements: the source of a piece of content, and the content itself. These two components must be independently verified, and compared against each other to see if they tell a consistent story. It’s often the case online that a piece of content is real, but the person who has shared it isn’t the original creator. Or, alternatively, a trustworthy source may have fallen for a hoax. Good people share bad things; and good content can come from surprising places.

The Associated Press’ verification workflow separates source and content and requires that each is confirmed before a piece of content can be used.

“AP has always had its standards and those really haven’t changed, and it was working with those standards that we were able to specifically set up workflows and best practices for dealing with social media,” said Fergus Bell, AP’s Social Media & User Generated Content Editor, International. “So AP has always strived to find the original source so that we can do the reporting around it. And that’s always the way that we go about verifying UGC. We can’t verify something unless we speak to the person [who] created it, in most cases.”

As Bell notes, the ultimate goal is to get sources on the phone or Skype and speak with them. To make that happen, it’s important to connect an online identity with a real-world person, and to confirm he or she is the originator of the piece of content.

Before speaking to them, it’s best to learn as much as you can about the person, their online presence and public interactions. If what they say doesn’t match up with what you’ve found about them, and the content, then you know you have a problem.

When it comes to verifying the content, today there are more tools than ever before that can aid in the decision-making process. But you also need the journalist’s sense of healthy skepticism, and the right amount of restraint.

Always remember that social content can quickly be altered, reshared and repurposed. Verifying the date, location and provenance of an image or piece of video is essential work — and when in doubt, it’s always better to err on the side of caution.

“We have a very cautious approach. Our rule is that our own journalists must verify each fact via two different sources,” he told the World Editors Forum. “Sources like Twitter and Facebook are very helpful sometimes – they can be very fast and well-informed. In an ideal case we would never use anything published by social media without verifying it before. That’s not to say that we don’t make mistakes.”

GigaOm’s Mathew Ingram says verification is now a collective act. “If you look at any major news event since the internet began you see the crowd at work … Journalists can’t verify alone,” he said during the Perugia festival.

A new Tow Centre global study by Claire Wardle and Sam Dubberley examined more than 1,000 hours of TV produced by eight news networks including Al Jazeera, BBC and CNN. Remarkably, they found that 72 percent of user-generated video studied did not include attribution to the source. And, in many instances, the content was attributed only to a platform (e.g. Twitter or Facebook) not the actual creator. This is problematic, both ethically and potentially legally.

The study’s authors argue that more transparency is needed, and this is a view echoed by the AP’s Bell, who highlights the importance of first obtaining a creator’s permission to use their content – even if it’s published openly on a publicly accessible platform.

“They’re sharing it with their friends and we happen to find it,” Bell said at the International Journalism Festival. “This is the currency we’re working with in ‘accidental journalism.’ We must treat them [social media contributors] fairly if we want collaboration.”

“Open verification” is likely to find growing acceptance within professional journalism contexts longer term but the flood of information, disseminated at unrelenting speed on social media platforms means that careful research and investigation by journalists are more important than ever. And while a balance between traditional verification processes and emerging practices is negotiated, there appears to be renewed nervousness within some legacy media organizations about the implications of sharing content on social media that has not been independently verified.

A case in point came this week from National Public Radio (NPR). In a memo published by Jim Romenesko, NPR’s standards and practices supervising editor Mark Memmott wrote to editorial staff, telling them to be mindful of their retweets: “…despite what many say, retweets should be viewed AS endorsements.” He did not explain how exactly a retweet differs from publication of a direct quote, but his conservative approach highlights resurgent concern about the risk of reputation damage that can occur when a journalist shares unverified content.

You can read this article in full, including case studies and a section on social media verification tips and tools, in the report Trends in Newsrooms 2014, edited by Julie Posetti, available here (free to World Editors Forum and WAN-IFRA members). For further case studies, see also: Julie Posetti’s chapter on social journalism research and verification in Tanner and Richardson’s Journalism Research and Investigation in a Digital World (Oxford University Press) and the Verification Handbook, edited by Craig Silverman.

This post was first published on the World Editors Forum’s blog. In part one of this Trends in Newsrooms blog series, we provided an overview of the top 10 newsrooms trends of 2014, in part two, we profiled the urgent need to shield journalism in the age of surveillance, while in part three we addressed the rebooting of mobile strategy.

Craig Silverman is an award-winning journalist and the founder of Regret the Error, a blog that reports on media errors and corrections, and trends regarding accuracy and verification. The blog moved to The Poynter Institute in December 2011, and he joined as adjunct faculty. He is also the editor of the Verification Handbook, a free resource published by the European Journalism Centre. Craig has been a columnist for the Toronto Star, Columbia Journalism Review, The Globe And Mail and BusinessJournalism.org. He’s the former managing editor of PBS MediaShift and was part of the team that launched OpenFile.ca, a Canadian online news startup. His journalism and books have been recognized by the Mirror Awards, National Press Club, Canadian National Magazine Awards, and the Canadian Online Publishing Awards. Follow him @craigsilverman.