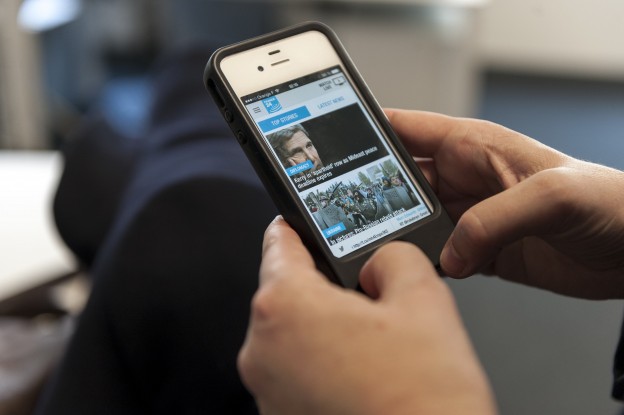 In May, a significant threshold was crossed: In the U.S., 60 percent of global online activity now happens via mobile devices – up 10 percent from the previous year. Perhaps even more significantly, “mobile apps accounted for more than half of all digital media time spent in May,” according to commercial analytics specialist Comscore.

The most mobile-driven platforms are digital radio, image-based sites like Instagram and Flickr, maps and instant messaging services. However social media overall is rated by Comscore as the number one category in terms of “overall digital engagement” with 70 percent of content now generated via mobile.

The Financial Times told the World Editors Forum earlier this year that it already had 62 percent of readers accessing news from phones or tablets and only 38 percent using desktop.

“Desktop is the new print. It’s static, one-dimensional and it’s slowly becoming more and more marginal to our business,” FT.com’s head of operations, Lisa McLeod, told a WEF board meeting in February. She identified the shift as sudden and dramatic. At the beginning of 2010, “It was zero access by mobile. It’s an absolutely phenomenal change.”

Next big thing and next big challenge

For print editors scrambling to keep up with the industry’s perfect storm of technological and market change, the transition to mobile is yet another challenge. They must work out how to wrestle the technology into shape; how to maximize bang for the buck with social media, which drives a lot of the traffic to news on mobile devices; how to reconfigure the newsroom around reporters using mobile devices to gather and file; and, not least, how to make money from news on mobile phones, which so far has proved more difficult to sell to advertisers than news on tablets, which in turn has not attracted the same revenues as print. All that while keeping a weather eye out for The Next Big Thing, which is likely to be “wearables,” such as smart watches and the Google Glass head-mounted Internet viewer.

Is it a big ask at a time when revenues are falling and newsrooms are stretched thin? “You betcha,” said Stephen Hutcheon, innovation editor with the Sydney Morning Herald (Fairfax Media, Australia). “Most newsrooms around the world are in this transitional stage from the good old days, with many people on hand, to a much leaner and meaner set-up, and that’s particularly true for the mainstream or traditional media which still has print going on.

“This is the big year when the crossover (to consumers coming first to the site with their mobiles) happens,” Hutcheon said. “But we still have this situation where all the producers (of news) working on digital platforms work on desktop. Most of what they see is desktop; they don’t look at the phone as often, and even fewer look at the tablet … In most cases, (the content) inherits elements that appear on the desktop website – say, a graphic or a font size – but when you shrink it down to a seven-inch screen on a mobile phone, you can’t read it. The same applies to things like interactives.”

Rick Edmonds is the media business analyst for The Poynter Institute in Florida. He says startups are often managing to gain a toe-hold in the mobile-first environment better than legacy media.

“Legacy media are still finding their place in the system, but the experience of certain startups suggests that in some ways starting fresh is better, rather than struggling to adapt your CMS from legacy,” he said. He points to BuzzFeed, Vice and Vox as sites that “are all doing things.” Other experts highlight Quartz, an online-only magazine published by The Atlantic, and Circa as examples to follow.

David Earley, engagement editor with Australia’s Courier-Mail newspaper (News Corp), who is about to make the move Guardian Australia, says many newsrooms need to push harder to win social-media traffic, which mostly comes to news from a mobile device.

“We have grown our Facebook audience by almost five times in the last six months,” Earley said. “It was a push. We made a concerted effort. We posted more stories, more often. We really consciously made sure that we were posting stuff in an engaging way and that we were doing stuff with pictures, and it’s worked.”

He said the other challenges are to keep the reader on the story for longer, and then to seduce the reader into other stories on the site.

Meantime, mobile is no longer the question in cutting-edge newsrooms. Wearables are the next challenge.

“I certainly think the trend in wearables is on an unstoppable trajectory,” Hutcheon said. “It will happen this year with smart watches. I’m not sure how smart watches will help journalism per se, but I do see things like Google Glass and drones as having a big part to play,” he said. “You can live-stream a news conference through a Google Glass; you could take pictures of people from that point of view. It’s a bit gimmicky still, but I think eventually it will be huge and mainstream. If you cast your mind back 20 years, to how odd it was for someone to be walking around the street in headphones and a Walkman, and now everyone has them.”

But there is much work still to be done by legacy media on mobile readiness even as wearables hurtle at them.

“We’re moving into wearables even before mobile’s become something,” said Michael Maness, who leads the Knight Foundation’s Program for Journalism and Media Innovation. “You have to start building these muscles of understanding that this is going to be an endlessly disrupted existence, and if you’re not building an organization that’s seeking out these things all the time, or at least strategizing about them, you’re going to be in trouble.”

The unabridged chapter from Trends in Newsrooms 2014 on this theme includes a curated list of mobile journalism tips for editors. The full report is available free to download to members of the World Editors Forum and WAN-IFRA and it is for sale to non-members here.

The World Editors Forum will continue the discussion about the trends online in a weekly blog series, and via the Twitter hashtag #TrendsInNewsrooms.

One response to “Trends in Newsrooms: Rebooting Newsroom Strategy as Mobile, Wearables Rise”