5 Ways ‘Engaged Journalism’ Made Progress in 2016 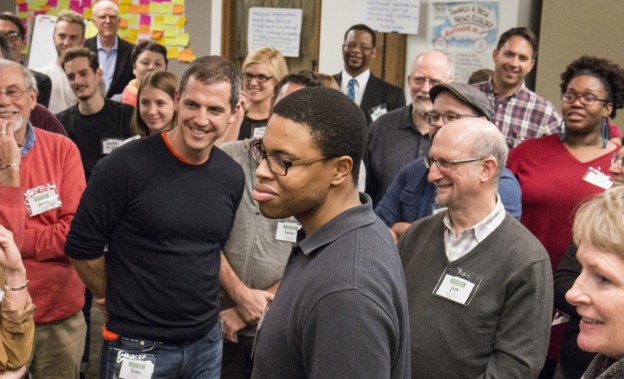 In January, the Agora Journalism Center and MediaShift kicked off the year with a 11-part series on engaged journalism, an emerging approach that conceives of news as a conversation — one in which community members, not politicians or pundits, take center stage.

As Geneva Overholser recently pointed out for Democracy Fund, the idea of engaged journalism is neither brand new (it has roots in the civic journalism movement of the 1990s) nor entirely set in stone (it’s “very much a concept in formation,” she wrote). But as we near the one-year anniversary of January’s series, it’s clear that this budding reform movement is picking up steam and re-shaping journalism in ways we couldn’t have envisioned even a year ago.

To honor that progress, here’s a list of five highlights for engaged journalism in 2016.

1. The post-election buzz centered around the need for listening

When Liz Spayd, the new public editor at the New York Times, argued in July that newspapers should be spending more time listening to their readers, few voices within legacy media were singing the same tune. But it wouldn’t stay that way for long.

Following a turbulent election season for American news media, the subsequent self-reflection led many practitioners to the same conclusion: Indeed, we need to listen better.

“It is our job to hear all people. And to listen closely. And to give the people of America insights into each other,” Washington Post executive editor Marty Baron said during his commencement address at the CUNY Graduate School of Journalism. “We will have to work harder at that.”

Similarly, New York Times columnist Nicholas Kristof opined that journalists “spend too much time chatting up senators, and not enough visiting unemployed steel workers,” and Washington Post media columnist Margaret Sullivan wrote that the news media “missed the story” in 2016. “A huge number of American voters wanted something different,” she explained. “And although these voters shouted and screamed it, most journalists just weren’t listening.”

Rolling Stone’s Matt Taibbi, among others, agreed: “Just like the politicians,” he wrote, “our job was to listen, and we talked instead.”

It’s too soon to know whether last month’s reflections will lead to sweeping changes in the news business. But at least we learned that journalists realize there’s a problem, and many of them believe engagement is a big part of the answer.

Part of a visual map illustrated by Nitya Wakhlu at the Experience Engagement conference in Portland, Oregon. Photo by Emmalee McDonald.

2. The Seattle Times, KPCC, and others modeled engaged journalism at its best

Of course, the most exciting sign of engaged journalism’s progress is that news organizations are increasingly putting its principles into practice. There are too many great examples to list, but here are a few of the stories and projects that stood out for me in 2016:

Under Our Skin by The Seattle Times: A thoughtful examination of the language we use to discuss race — and the different ways people interpret it. (The nifty comments interface is especially worth checking out.)

I Voted Clinton. You Voted Trump. Let’s Talk by the New York Times: A three-part series by The Run-Up podcast that brought Trump voters and Clinton voters together to discuss their perspectives.

#AirTalkItOut by KPCC: A similar post-election project by KPCC (one of the rock stars in engaged journalism) that featured Trump and Clinton voters from southern California.

Reliving Agent Orange by ProPublica: A crowdsourced investigation into how Agent Orange exposure has impacted veterans and their families. (The project began in 2015, but ProPublica continues to collect data and publish new reports, including this major feature earlier this month.)

Justice in the Embers by KCPT and the Center for Investigative Reporting: A StoryWorks theater performance and community discussion built around Mike McGraw’s reporting about a deadly Kansas City fire and its aftermath. McGraw credited the play with giving his reporting “new legs” and engaging audiences in “bold new ways.”

50 Words by The Boston Globe: A delightful project by the paper’s Ideas section that invites Bostonians to tell a story about their city in exactly 50 words.

A screenshot from the Seattle Times’ Under Our Skin project.

3. The Coral Project and Hearken developed new tools for engagement

Building on the theme of listening, The Coral Project launched a new open-source product in September that will help news organizations do just that. The tool, called Ask, provides a simple interface allowing journalists to pose questions to their audiences and then sort and curate the responses.

The Coral Project also continued to fine tune its tool, Trust, which is designed to help journalists identify trustworthy community voices within their comment sections. (I wrote about the early development of Trust in part eight of January’s series).

Elsewhere on engagement’s tech frontier, Hearken announced the development of a new Interactive Reporter’s Notebook to complement its Engagement Management System, which is being used (to great effect) by KQED, Inside Energy, Michigan Radio, and more than 50 other partners.

The new Reporter’s Notebook tool will allow journalists to share their work with audiences as they go and “capture what happens along the way.”

Engagement has been a hot topic at journalism conferences lately, a trend that continued in 2016, beginning with The Engagement Summit in Macon, Georgia, in January. Participants at the conference even drafted a three-part manifesto for engaged journalism, which offers a good starting place for how to define and articulate the approach.

Other conference highlights this year included the People-Powered Publishing Conference in Chicago and the “unconference” session on relational engagement at ONA16. And as 2017 approaches, there’s no sign of that momentum slowing down: The Agora Journalism Center and Journalism That Matters recently announced that they’ll be hosting another engagement-focused conference in Portland in May — and other events are reportedly in the works.

In January, I wrote about the Agora Journalism Center’s plans to develop a first-of-its-kind digital platform to support engagement practitioners across the country. Those plans took a big step forward in September when Agora received a $221,000 grant from the Knight Foundation “to support the platform and spread best practices in engagement among journalists across the nation.” (Disclosure: I’ll be working on the platform as Agora’s project and product manager.)

The platform is currently in its development stage and is expected to be launched publicly in March or April. If you’re interested in helping Agora co-design the platform, fill out this survey or drop project director Andrew Devigal a note here. (We’d love to have you on board!)

Ben DeJarnette is the project and product manager for the Agora Journalism Center’s Community of Practice Platform for Engaged Journalism and a contributing editor at MediaShift. He is also a contributor to InvestigateWest, Pacific Standard, Oregon Quarterly, and others.