Reforming the Trollosphere: Creating Conversation in the Comments Section 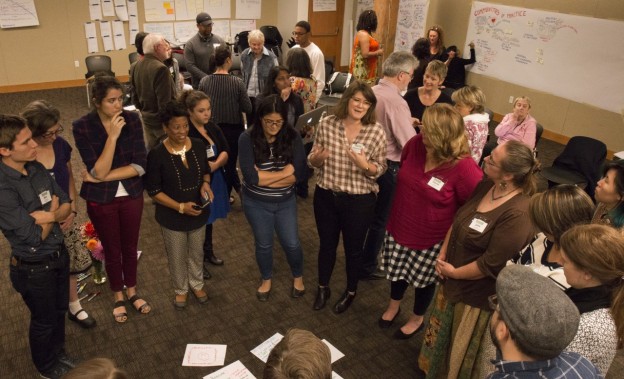 Participants gather on the final day of Experience Engagement to discuss next steps for the community of practice. Photo by Emmalee McDonald.

On Saturday afternoon at the Experience Engagement “un-conference” in Portland, Oregon, last October, I found myself standing in a circle, arms tangled in a “human knot” with a city planner, a community organizer, a mediator, two college students and a web innovator. No, that’s not the beginning of a cheesy joke. It’s part of Sydette Harry’s plan to make the Internet a hub of conversation between community members and journalists.

Harry is community lead for The Coral Project, a collaboration of the Mozilla Foundation, the New York Times and the Washington Post to help publishers create stronger communities around their journalism. The team’s first creation, slated for rollout early this year, will attempt to bring productive conversation to comments sections by giving news organizations better tools for sorting, rating and prioritizing audience contributions.

So how does a human knot exercise contribute to a better comments section? I’ll come back to that one, because there’s a bigger question begging to be asked here: Conversation in the comments section?! Really? One of the earliest lessons I learned as a young journalist was that you do not go anywhere near the comments posted to your stories. It’s just not worth it, I was told. Even if the story does inspire a few thoughtful responses, the comments section will invariably harbor a small army of Internet “trolls” who revel in lobbing inflammatory grenades at just about everything imaginable. At best, those comments are petty. At worst, they’re racist, sexist and seriously offensive — hardly the ingredients for fruitful conversation.

In fact, comments sections have become so toxic that many news outlets are choosing to do away with them altogether. Citing concerns about trollish behavior, news outlets such as CNN and the Chicago Sun-Times have elected to either eliminate or scale back their comments sections, and others are following suit.

In August, Nicholas White, CEO of The Daily Dot, explained his newsroom’s decision to press pause on comments: “To have comments, you have to be very active, and if you’re not incredibly active, what ends up happening is a mob can shout down all the other people on your site,” White told the BBC. “In an environment that isn’t heavily curated, it becomes about silencing voices and not about opening up voices.”

Making the case for comments

It hasn’t been a great few years for comments, but Harry and her colleagues at The Coral Project believe they can help reverse the tide.

Amid all the backlash against online comments, there is, in fact, plenty of cause for optimism. In November, the New York Times profiled a group of its most prolific and trusted online commenters, from 95-year-old electrical engineer and science fiction writer Larry Eisenberg, who has earned a reputation for commenting in poetic verse, to 41-year-old mother of two LaTosha Plavnik, who frequently shares pearls of wisdom on the site’s “Motherlode” parenting blog.

Fittingly, the Times story about its commenters received more than 1,400 online comments, many of which told a story of their own.

“Truth be told, it is these commenters (and others not included) who cause me to subscribe to the Times,” wrote “Sophia” in a comment that has been recommended 324 times. “There is something very comforting to me to read them and I am always thrilled when I appear among them. It feels like a community and they bring me solace and questioning and wondering in these difficult days for America and the world.”

“Frank” from Bangor, Maine, related a similar sentiment. “A confession: sometimes I read the comments before the article that they discuss,” he wrote. “Well, not all of the comments. But I get a taste of dessert, then go back to the ‘main course’ and then more dessert.”

Frank and Sophia’s comments suggest it’s misguided to treat comments as a nuisance, when in reality they have become a core function of journalism, a service that amplifies alternative voices, cultivates trusted perspectives and builds community.

Some newsrooms have chosen to outsource these functions to social media, but Harry says that might be a short-sighted strategy. For one thing, there’s financial self-interest to consider. When community members engage in the comments section, it means more time spent on the news organization’s website, which means more opportunities to turn audience metrics into advertising dollars. As media companies try to build sustainable business models in the digital age, passing off potential advertising dollars to Facebook and Twitter is a wasted opportunity.

But retaining the comments section is also a smart editorial decision, Harry says. Unlike social media, where readers and listeners are mixed in with billions of other non-affiliated users, the comments section is home almost exclusively to a news organization’s most engaged audience members, making it easier to take their collective pulse and use that data to inform content. “In the comments section, you see how people act and react, what they really like and enjoy,” Harry says. “There’s such a possibility for finding rich content when you develop communities that last beyond the article — and that help push the next article.”

From human knot to collaborative design

The Coral Project will officially launch its first tool early this year, but the collaborative design work has been underway for nearly a year now. In its own way, Harry’s human knot activity at Experience Engagement was part of that process.

For those not acquainted with this summer-camp staple, the human knot is a team challenge that requires a group of strangers to stand in a circle, cross their arms and grab hands with two random people around the circumference, creating a messy tangle of limbs that can be resolved only by twisting, stooping, stepping and otherwise navigating back to a perfect circle with everyone’s arms uncrossed.

At Experience Engagement, Harry led a breakout discussion about how to create more rich and honest engagement through conversation. But not without making our group conquer the human knot first. It was a nice ice-breaker activity (our team rocked it!), but Harry says it was also a way to help people think about human relationships, including those between journalists and their communities.

“When you do something like that, you have to pay attention not just to a person’s presence, but also to how you’re connected with that person,” Harry said. “You have to ask, ‘How do we solve this problem together?’ In the context of journalism, that makes you hyper-aware of how connections are just as important as sources.”

The human knot exercise is also a microcosm of The Coral Project’s broader approach to collaborative design. As Nieman Lab reported in October, the project team developed their first engagement tool by practicing some community engagement of their own, finding inventive ways to listen to end-users and better understand their needs. Meanwhile, The Coral Project also committed to designing its tools as open-source software, so that newsrooms can add their own wrinkles.

“You can’t just throw ready-made solutions at people who are operating in really specific communities,” Harry explained. “We want users to adjust for what they want.”

Harry and The Coral Project team aren’t the only ones working to build a better comments section. Last spring, Aja Bogdanoff and Christa Mrgan launched Civil Co., a Portland-based tech company with a mission to “fix online comments” and “end abuse and harassment within commenting communities.” The company’s first product, Civil Comments, requires users to rate three other comments, plus their own, for civility and quality before finalizing their submission. The platform then analyzes these reviews to decide which comments get published.

“Instead of saying, ‘Gosh, why are people so horrible online?’, it has been more helpful for us to look at it from the perspective of ‘why aren’t people this horrible this often in face to face situations?’” Bogdanoff told TechCrunch in October. “We need to change how people are submitting their content… and we need to make sure that we’re giving them good reasons to behave well.”

One response to “Reforming the Trollosphere: Creating Conversation in the Comments Section”