It’s a Test Kitchen, Not a ‘Teaching Hospital’ 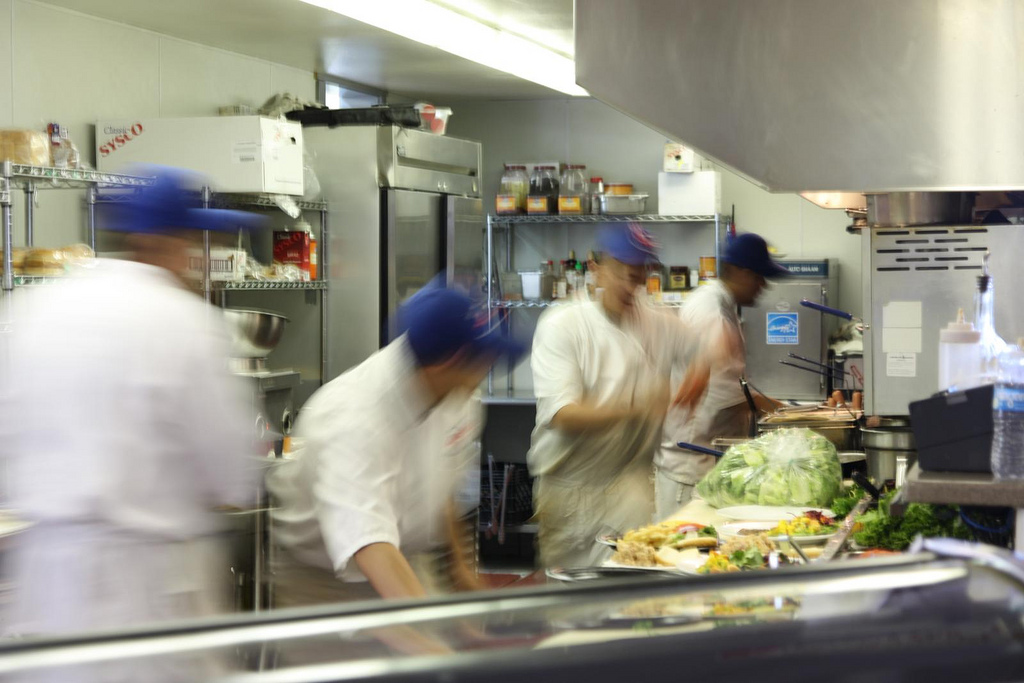 In July in Auckland, New Zealand, the World Journalism Education Congress brought together journalism educators from all over the world, and I was supposed to help lead the conversation about the “teaching hospital model.” In the months before the conference, I became a little obsessed with the feeling that it didn’t quite offer the best framework for journalism education.

I was the designated “expert” on this topic for the syndicate, a study group that does pre-conference reading on a subject, and then gathers to discuss it, proposing solutions or recommendations. But I couldn’t very well offer expert guidance on a model I had serious doubts about, as I wrote in an earlier piece for Nieman.

"I’m going to ask my reporting students to think of the newsroom as a test kitchen (with a café) this semester and see what happens."

I’ve taught in the newsroom of the Columbia Missourian at the Missouri School of Journalism for 12 years. Last year was the most intense I’ve experienced as one of the faculty editors who guided our students’ coverage of complex and troubling issues on our campus, including: racial protests, a highly publicized debate over “safe spaces,” the resignations of the university president and chancellor, and an intense backlash from the legislature. If it weren’t for the documentary film crew that happened to be in our newsroom for several of the most intense and ethically difficult days in that period, it would all be a bit of a blur.

When I look at the clips from that unfinished documentary, I don’t see anything like a teaching hospital, with authority figures (physicians) instructing protégés (medical students and interns). I see and hear a noisy kitchen, with lots of cooks of varying levels of expertise or specialization pulling together to make something. It’s a little chaotic and very dynamic.

I hear editors asking students, “What do you have ready right now? What can we get?” You can see us thinking about what our customers need and want (more about that later) and the ingredients required. I hear students taking the initiative and floating ideas and asking questions. And editors listening and saying, “Yes. Let’s make that instead.”

Let’s belabor the metaphor because it matters. Because metaphors are powerful and useful. Because the wrong metaphor can misguide and constrict. (And before you accuse me of being “gendered” in my choice, I would point out that like many newsrooms, professional kitchens have been dominated by men for many years. Only recently have women made significant inroads as chefs and restaurant owners, and women are attending culinary schools in increasing numbers — and not just taking the pastry chef route.

Teaching people to serve up news in all of its many forms has much more in common with teaching people to cook for (paying) customers, than it does teaching people to provide medical care. Just as anyone with a smart phone can “report,” anyone willing to follow a recipe can cook the basics, though it helps to have someone guiding you. Cooking for an “audience,” whether you’re running a food truck that makes just a few things, or a restaurant with a 40-item menu is quite another thing. You’ve got to make something that people like, and do so consistently, or you’ll go out of business. And you’d better not make people sick (think, inaccuracy or bias). Or demonstrate that you don’t care about your customers’ satisfaction.

The people formerly known as “the audience” aren’t unwell. They’re hungry for information (what they need), diversion (what they want) and participation (a seat at the table, a place in the kitchen, maybe even a recipe to try at home). What we’ve done in the past that cost us so much credibility and loyalty is analogous to dumping food — and the check — on a table and walking away, regardless of whether it’s being eaten, appreciated or dumped in the trash.

We’re learning through audience outreach to first ask what people need/want to know, respond thoughtfully and then check back to see how we did. Finding out what people want and need to know is so important, it ought to be right up there on the student reporter’s to-do list, along with verifying that what people are asserting is actually, factually correct.

Or the people we work for — the audience — will just go someplace else. Many of them already have.

A story about a sandwich

Believe it or not, the best Reuben sandwich in the entire world is made in Auckland at a place called The Federal Delicatessen (if you don’t believe me, check Yelp). I couldn’t stop talking about that sandwich when I launched into this kitchen metaphor at the conference in Auckland. The deli cures its own pastrami. (Yes, they use pastrami, not corned beef.) Pickles the sauerkraut. Makes the dressing.

A Rueben is not a hard sandwich to make, but when done right, it stands out. Photo by Matt Johnson

A Reuben isn’t a difficult thing to make passably well. To make one that a person living across the world never forgets is quite a feat. It takes attention to detail, and a commitment to putting in the time, without shortcuts. It’s a product so good, most people who’ve had one would pay twice the price on the menu for it, I bet. They wouldn’t dream of going anywhere else for one, given the chance to go to the Federal.

This is a lesson in how you build passion — not just loyalty — for a product that lots of other people can make. You make it not just satisfying and delicious, but very, very hard to duplicate. I’m a pretty decent cook, but there’s no way I’m going to cure my own meats. I leave it to the masters.

I bet they tested the hell out of that sandwich. I imagine them sitting around a table in the kitchen, figuring out if the meat was tender enough, the cheese gooey enough, the dressing tangy enough. They probably made adjustments after putting it on the menu. And still do.

That’s what we need to teach journalism students to do — to never get locked into an untested idea of what is good. To be willing to be influenced by feedback, unless it’s from trolls. To have enough faith in the people who like us to try out some new stuff on them, regularly. And to listen particularly carefully. We also need to teach them there are no shortcuts to greatness, to that prize-winning product.

This stuff isn’t in an anatomy textbook. It usually isn’t life or death, though journalism has and does save lives. Check out the Pulitzer-winning AP series, “Seafood From Slaves,” for a recent example. This is the nutritious — the essential — journalism. We can’t ever stop making it and figuring out how to make it easier for people to consume.

I’d rather we educators talked more, and happily, about experimentation than speak solemnly about innovation. It’s too much to tell most journalism students that it’s up to them to save the industry. Instead, we should create a learning space where we give them the tools they need to test the ideas that come straight out of their own unique cultural experiences and background. From this, they are likely to learn the value of authenticity and how deeply it resonates with consumers and communities.

In both journalism and the real world, food trucks fill market niches. (Photo by Charleston’s TheDigitel)

We can’t teach journalism students how to do everything — not in the limited time we have with them. When we talk about fundamentals, even that list gets very very long. But one essential part of a journalism education must be producing something for an actual community, or for a specific purpose, and measuring how it does and is shared. Even the smallest journalism programs should make this a priority, and it’s included among the goals of the “teaching hospital” model.

But how? How can a small journalism program provide students with that experience — one that combines the teaching of some fundamentals and experimentation and, above all, audience understanding/sensitivity — with few resources?

By thinking like a food truck that fills a market niche. Students should do research, brainstorm ideas and come up with a project that serves a community. Then they should decide on which tools to use to make and deliver their product. Faculty should be willing to stumble along through the learning (and fallen cakes) along with them. We’ll all learn more about entrepreneurship.

Sometimes, your teaching newsroom should be a lemonade stand on a hot day: an improvised, thrown-together way to sell something essential and needed at that precise moment. People will appreciate it, and you. Students will learn the importance of being responsive, nimble and resourceful, especially in breaking news situations.

The test kitchen metaphor is about a mindset of collaboration with our students, our communities and each other as faculty colleagues. Ever seen what happens in a kitchen when people can’t work together? Check out Gordon Ramsay’s “Kitchen Nightmares” sometime.

Happily, the journalism educators gathered for the syndicate in Auckland seemed to find a lot of value in this new metaphor. Several of them came up to me after the sessions and told me how much they liked thinking about journalism education this way. The idea was adopted as one of the recommendations in the syndicate’s final report.

Elanie Steyn of the University of Oklahoma’s Gaylord College of Journalism and Mass Communication, who chaired the “teaching hospital” syndicate, told me she thought one of the reasons it was so well-received was that it’s relatable and emphasizes “that you adjust and retry” without fatal results.

Whatever the case, I’m going to ask my reporting students to think of the newsroom as a test kitchen (with a café) this semester and see what happens. I expect that it will bring down the anxiety level, heighten the creative impulse and increase their awareness of that crucial ingredient: responsibility to the consumer.

Katherine Reed is an associate professor on the Print and Digital faculty at the Missouri School of Journalism. She got her start as a police reporter and has been a journalist for about 30 years. She has taught the cornerstone reporting class taken by undergraduate and graduate students who report for ColumbiaMissourian.com since 2008. She is also an avid cook and food tourist whose Italian-American family gave her an early start in the kitchen.

One response to “It’s a Test Kitchen, Not a ‘Teaching Hospital’”