What Journalists Can Learn from John Oliver and ‘Last Week Tonight’ 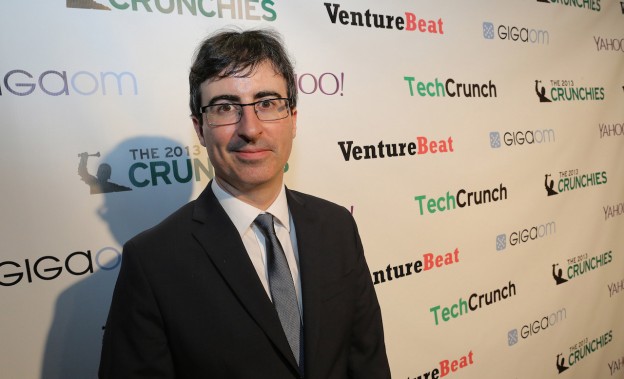 A TV anchor once dubbed the most trusted man in America is back on television — and no, I’m not talking about Brian Williams.

On Sunday night, British-born comedian John Oliver returned for season three of his acclaimed HBO series “Last Week Tonight,” a comedy news show that combines explanatory reporting with sharp satire, slapstick comedy and even some musical ensembles. Oliver got his start in fake news on the grand-daddy of them all, “The Daily Show,” with Jon Stewart as the founding father.

"On 'Last Week Tonight,' Oliver shows a commitment to accuracy and truth, but he couldn't care less about balance."

It’s a style entirely distinct from, say, the evening-news gravitas of Walter Cronkite, but despite Oliver’s repeated protests that he’s not a journalist (see here, here, and here), a growing number of media critics now point to his comedy news segments as illustrations of great journalism. The Columbia Journalism Review, for example, published an article in 2014 highlighting four topics that John Oliver explained more clearly than television news, and Columbia Law School professor Tim Wu — who’s credited with coining the term net neutrality — tweeted that Oliver had “rendered every other explanation [of net neutrality] obsolete.”

The debate over whether Oliver qualifies as a capital-J “Journalist” still rages, of course, but while watching Sunday’s episode, it struck me that Oliver might actually be out ahead of the news industry on some important trends. Here are four things that Oliver is doing that traditional news organizations could learn from.

Slowing down the news

In the digital era’s 24-hour news cycle, it’s widely held that news organizations must focus on delivering the news short and fast in order to survive. So how do we explain the success of “Last Week Tonight”? Oliver’s show airs only once per week and it specializes in 10- to 20-minute deep dives on topics as complex (and as seemingly dry) as net neutrality, cash-advance loans, and prisoner re-entry.

David Carr, the late New York Times media critic, initially predicted that the show’s weekly format “would never work,” but he later acknowledged that he’d missed the mark. As Carr explained: “I think there is, right now, a hunger for a kind of slow news, thoughtful takes that won’t fit inside a Twitter feed. Stephen Colbert demonstrated with his stunt super PAC that topical comedy on dry but important matters can educate in addition to bringing the belly laughs.”

The “slow news” movement in journalism appears to be picking up some steam, as journalistic startups like Vox, FiveThirtyEight, and Vice win over huge audiences with a reporting approach that spurns “getting it first” in favor of going deep and doing it best.

With some luck, slow news might eventually become the norm in journalism. But for now, it seems the journalists are still chasing the comedian.

There has been much written lately about the perils of “false balance” — a conundrum in which journalists, by trying to give equal voice to “both sides” of a story, actually obscure the truth on topics like climate change and childhood vaccinations, which aren’t exactly toss-up issues.

On “Last Week Tonight,” Oliver shows a commitment to accuracy and truth, but he couldn’t care less about balance. In Sunday’s feature segment, for example, Oliver eviscerated legislators in North Carolina, Texas, Wisconsin and other states for implementing voter ID laws, which he criticizes as thinly veiled efforts to suppress voter turnout among groups that tend to support Democrats. As Oliver points out, the facts on this issue are unmistakably clear: Voter impersonation is extremely rare in the U.S., with only a handful of documented cases each election; the voter ID laws intended to fix this “problem” disproportionately impact African-American and Latino voters, who historically are more likely to support Democrats; and the backers of the voter ID laws are almost exclusively Republicans.

A traditional journalist, eager to avoid charges of partisanship or bias, would feel compelled to maintain neutrality and balance while producing a story about voter ID laws. Oliver instead did this. I’ll leave you to assess the merits.

Amid all the hype about his journalistic chops, Oliver has insisted that his show is “comedy first, and it’s comedy second,” as he told The Daily Beast in 2014. “It’s a comedy show, just about things that we’re interested in.”

But maybe journalism and humor don’t need to be mutually exclusive. In fact, when covering issues as esoteric as net neutrality, an occasional joke about dingos might be exactly what it takes to get the audience to the finish line.

Of course, it’s probably not possible (or advisable) for journalists to match Oliver’s comedic chops. But even without snappy one-liners, there are plenty of ways that journalists can make the news more fun. The online news publication Grist, for example, once combined a story about the discount rate in economic climate modeling with adorable — but completely random — photos of otters. And experimental projects like Curious City and Serial have used “discovery journalism” to engage audiences with the process of how reporting comes together.

Because hey, if the goal is to keep audiences engaged with quality journalism, adding a splash of fun can’t hurt.

Certainly, there has been plenty of good reporting on this story by mainstream journalists. The New York Times, for example, created a graphic showing the number of days from nomination to confirmation for every Supreme Court justice ever; PolitiFact provided a thorough fact-check of comments made at Saturday’s Republican presidential debate; and SCOTUSblog explained the implications of an eight-member Supreme Court for the cases still pending this session.

But what all of these news stories missed was a crucial piece of context that Oliver provided on Sunday night. During his opening segment, Oliver plays an old CSPAN clip that shows McConnell ripping into the so-called “Thurmond Rule” — the same one that Republicans are now citing as precedent for not confirming judges in the months prior to a presidential election.

“This seeming obsession with this rule that doesn’t exist,” McConnell says in the “Last Week Tonight” clip, “is just an excuse for our colleagues to run out the clock on qualified nominees who are waiting to fill badly needed vacancies.”

Oh, the irony. And oh, the power of archives. In the span of about ten seconds, Oliver cut through the political hot air and exposed McConnell’s partisanship to brilliant effect. It’s something journalists could do more often, so in the spirit of walking that walk, here’s what MIT’s William Uricchio said about archives in my post last week.