What Students Learned from Reporting on Poverty in Oklahoma 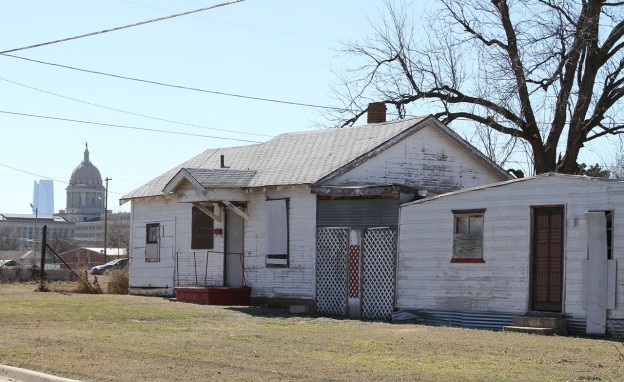 The project used mobile video and data to look at issues in three neighborhoods, one of them in the shadow of the state Capitol. Photo by Nate Robson/Oklahoma Watch.

When the University of Oklahoma’s Gaylord College of Journalism and Mass Communication joined with Oklahoma Watch to apply for an ONA Challenge Fund grant, we hoped to prompt conversation about poverty in neighboring Oklahoma City. The project did that, but from a journalism education standpoint, the biggest impact was on the perspectives of the students. We also learned some lessons that may be useful for future journalism school partnerships with media outlets on community issues.

The project, called “Talk With Us: Poverty in Oklahoma City Neighborhoods,” was aimed at using mobile video and GIS data to report on poverty and create a conversation between residents of low-income neighborhoods and area leaders. After setup in summer 2014, the project was carried out in the fall 2014 and spring 2015 semesters.

"If you go out and you talk to people that aren't like you, you won't start writing stories and pieces that aren't true." – Victor Henderson

Between the hands-on and research elements of the project, seven Gaylord College professors were involved along with students in five classes. In addition to our primary media partner, Oklahoma Watch, we worked with classes at two Oklahoma City high schools and university partners in the library, GIS and social work.

A website presented 35 pairs of mobile videos on poverty-related issues. Interviews with residents of three neighborhoods identified issues related to health, public safety, blight, schools and other topics. The interviews were coupled with responses from area leaders. Each pair of videos was accompanied by data visualizations on the topics, mostly maps from GIS data.

Although we set out to spur discussion on social media, the most robust interaction was offline — at a public forum on neighborhood issues in one of the three neighborhoods. About 85 people, including 15 representatives of community and government entities, attended, as well as representatives from six media outlets, including three Latino outlets.

Interviews with 13 participants, including faculty, the Oklahoma Watch editor and reporter who worked on the project, and several students showed the value of this project for student learning.

Students, who went out in pairs or larger groups, had to do two things that are basics of journalism training: approaching people they didn’t know on the street to interview them and doing interviews with officials who may be difficult to reach or not forthcoming with detail. But this project did more for the students most engaged in it.

Interviews they did with neighborhood residents removed blind spots of understanding about neighborhood problems and needs.

Beyond confronting issues that get much typical media attention, such as methamphetamine use, students heard about less overt problems that can make a big difference in the daily lives of residents.

For example, Arianna Pickard, who did double duty in the project as a student in Advanced Multimedia Journalism and an Oklahoma Watch intern, said one resident voiced concern about lack of swimming pools in her area. A lot of public pools at schools had closed, and that was keeping people from learning how to swim. “That’s not something you think would turn out to be an acute problem, but it really is because just for people’s safety they should be learning how to swim,” Pickard said.

Brittan Jenkins, another student and intern, said she never would have thought of this as an issue, especially coming from a neighborhood where most houses have their own pools. Getting into the community and talking to people, she said, “you figure things out that you never would have guessed because they don’t apply to you.”

Victor Henderson, a graduate student who also worked on the project as an intern, pointed to the value of a project like this for challenging stereotypes. “If you go out and you talk to people that aren’t like you, you won’t start writing stories and pieces that aren’t true. And you won’t have headlines, you won’t have stories that disenfranchise groups.”

Through reporting, Henderson found people who might not fit the stereotype about the neighborhood — for example, white families living in the predominantly black northeast side of Oklahoma City, and college-educated people living in a predominantly low-income area because they want to. “So you get to see how things aren’t necessarily cut and dried.”

WHAT WE LEARNED FOR FUTURE PROJECTS

The interviews and other discussion during the project also point to lessons for future projects. Here are three:

1. Develop protocols on how to do mobile video and approach interviews, tested before the project starts full scale in classes.

Oklahoma Watch reporter Nate Robson, along with intern Jenkins, did preliminary mobile video interviews over the summer under the direction of executive editor David Fritze. Based on these test interviews and discussion with faculty, a protocol was developed with practical tips on preparation, safety, good audio and video, and interaction with interviewees. When fall classes started, students received the protocol and the editor and reporter also met with students in each class about the project.

With the students heading into unfamiliar territory and facing technical challenges of interviewing in a variety of conditions, the protocol helped to reduce trial and error that might have detracted from execution of the project.

2. Designate a point person from the partner news organization to help students with the project.

The project benefited greatly from having Robson consistently available to consult with students as they were working on their interviews, editing, composing text elements or acquiring data. The students who took advantage of his availability did much of the strongest work. It made the most of his wisdom from experience as a reporter, and it helped maintain consistency in the approach and quality of work.

For a small news organization such as Oklahoma Watch, it was challenging to commit that amount of time. But whether large or small, news organizations involved in this kind of partnership are likely to achieve better results if they can deploy someone to focus significant time on the project.

3. Sending out students in groups can enhance their learning and lead to better content.

Although students went out in groups partly for safety reasons, several of those interviewed saw other benefits. Less experienced students learned from those further along. Diversity in gender and ethnicity brought different perspectives to the interviews.

Having two or more students together also led to more ideas for questions. Ashley Sanchez, another student and intern, said, “One person started and then we kind of worked off of each other, and I think we got more information out of the person we were interviewing.” She said the interviews became more discussions.

Talk With Us not only confronted leaders directly with neighborhood concerns but also brought issues to light that we can pursue in greater depth with Oklahoma Watch in future projects.

Beyond that, it left our students better prepared to report on the needs of diverse communities, though we have plenty left to learn for projects both on and off campus. In a year of national attention to issues of race — and with the University of Oklahoma itself in the spotlight before the project was over — the value of that kind of learning became even clearer than it was when we started.

David Craig (@dcraigok) is a professor and associate dean in the Gaylord College of Journalism and Mass Communication at the University of Oklahoma. He studies ethics and best practices in online journalism. He coordinated the research side of the project, and he thanks assistant professor Melanie Wilderman and doctoral student Mohammad Yousuf for their interviews with project participants.