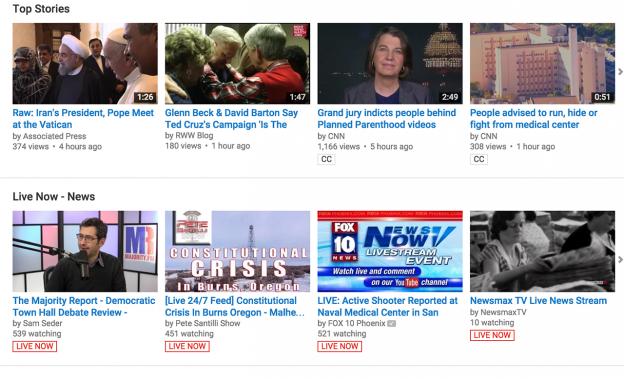 Consumption of news video online has been on the rise for years, in terms of both time spent watching and percentage of news consumers who watch. This trend is expected to continue. Accordingly, revenue from video display ads has also increased, and at a faster rate than for any other display category. In this post, we’ll attempt to benchmark the current state of news video consumption and highlight the practical implications for publishers.

The difference between typical view times on larger and smaller screens underscores the need for publishers to make mobile video viewing a seamless user experience.

We’ll use data covering all visits during the first two weeks of December 2015 to the sites of more than 50 publishers for which both page and video analytics were available. (Note: all of this data is anonymous and aggregated.) These publishers vary widely in readership and content — from major international news sources to niche, topic-specific sites — as well as in their production and usage of video content. Of course, because these results are aggregated, they may not necessarily reflect the experiences of specific sites.

Overall, visitors watched videos far less often than they visited pages: just one in 20 page visits resulted in a video view. That said, only 4 percent of pages published in this time period actually featured a video, so that discrepancy may arise from both supply and demand, as well as news consumption habits formed in this video-scarce context.

Approximately 11 percent of site visitors were considered viewers, which means that they watched at least one video during the two weeks in question. While most viewers watched only one or two videos, 1 percent of viewers watched more than 15 videos, making them responsible for nearly 20 percent of all video views.

As with the consumption of news articles, there are many casual video consumers and a small number of “power” viewers. Furthermore, as shown in the chart below, there’s a huge range of consumption among these power viewers: out in the “tail” of the distribution are individuals who viewed hundreds of news videos in a single 2-week period.

Depending on their goals, publishers may find more success by:

It’s worth noting, though, that the presence of video on a page is not without consequence. For instance, research has shown that video affects the ability of individuals to learn from news content as well as their perceptions of a news site’s credibility. And, by dint of personality or habit, some people simply prefer to read the news rather than watch it.

Regardless of knowledge retention, something about video does seem to leave an impression after a viewer first visits a site. The return rate for new viewers — defined as those who haven’t watched any videos for more than 15 seconds on a given site in the previous 30 days — depends strongly on video consumption during their first day on-site.

As seen in the figure below, the percentage of returning viewers doubled, from about 3 percent to 6 percent, for those who initially watched one or two videos, respectively, and continued to rise to about 9 percent at six videos viewed. Similarly, the percentage of returning viewers increased steadily with the amount of initial view time, from roughly 2.5 percent at 30 seconds of view time to 7 percent at 500 seconds. While we see similar trends for the return rates of new page visitors, the magnitude of the increase was significantly smaller than that for video viewers, as were the maximum return rates achieved.

Averaging over all site visitors, about 15 percent of total engaged time was spent on video content; for video viewers specifically, this proportion rose to an impressive 54 percent. In general, viewers spent 3.6x more time per video than per article. And, while 53 percent of visitors to a given page spent fewer than 15 seconds engaged with its content, only 19 percent of viewers of a given video did so.

This striking result probably has a number of causes, including systematic differences between the subject matter, quality and “consumption time” of articles and videos, as well as visitors’ perceptions, motivations and preferences regarding the format in which they consume the news. It may also have deeper psychological roots. The human brain processes video content differently from text: faster, more passively and generally with less cognitive effort. Given our brain’s innate tendencies towards “laziness” — see Daniel Kahneman’s “Thinking, Fast and Slow“ — it’s perhaps unsurprising that news consumers stay with video longer than text: simply put, it’s easier.

Video consumption varied dramatically by time of day and the device used to access it. Roughly 45 percent of all video views occurred on desktop and mobile devices apiece, with the remaining 10 percent occurring on tablets. The total number of views on desktop peaked in early afternoon then plateaued for the rest of the day, while views on mobile peaked in late evening; these consumption patterns closely mirror those observed for pages. As expected, both seem to reflect the daily rhythms of people’s work and personal lives.

As shown in the chart below, Average Engaged Time was highest on desktop computers (with an average of 160 seconds per view), followed distantly by tablet (86 seconds) and mobile devices (68 seconds). (Note that these statistics were aggregated over many news videos, with durations ranging from 30 seconds to 30 minutes.)

Furthermore, desktop viewers tended to watch a larger fraction of videos’ full durations than those on mobile or tablets. Considering the technical and physical constraints of extended video viewing on small screens, the decline in Average Engaged Time with respect to screen size makes sense. Average Engaged Time varied less dramatically with respect to time of day, with the exception of longer viewing during the early morning on desktop computers. Between midnight and 6am, far fewer people were watching generally longer videos, and, interestingly, they tended to watch a larger proportion of the full video durations.

Still, if viewers are unable or unwilling to watch longer videos on mobile devices, it may be worthwhile to customize content depending on the device used to view it. In fact, this is already happening for certain distribution channels; on Facebook, where videos scrolled into view autoplay on mute, many publishers build the starts of their videos to be immediately attention-grabbing.

Lastly, we’d like to know if and how engagement with video content on a page affects engagement with the rest of the page’s content. One indicator of engagement is scroll depth — that is, the maximum distance down a page to which a visitor has scrolled, in units of pixels — which relates to the amount of a page’s content that the visitor has seen (but says nothing about how much time they spent on it). The average scroll depths of visitors on pages with and without video were approximately 2800 and 2950 pixels, respectively, but the difference was not statistically significant. Since most videos appear at the top of a page, this suggests that the mere presence of video doesn’t systematically detract from accompanying page content.

That said, visitors to pages with video who actually watched a video scrolled significantly less (1700 pixels) than those who didn’t watch (3050 pixels). Research has shown that people cope with an overabundance of media options by creating “repertoires” of selective media use; it seems that many viewers watched the video and ignored the page content below.

As before, we shouldn’t infer causality: Having video on a page may have caused slightly higher engagement with the page’s content; or maybe the written content of pages with video was of a generally higher quality than for pages without, thus resulting in higher average engaged time; or perhaps editors added videos to pages that were performing particularly well, or promoted them better, or performed any number of actions in a systematically different way. At the very least, we can conclude that having video on a page doesn’t reduce engagement with the page. And, by at least one measure, the presence of video is correlated with an increase in the time visitors spent engaging with the page, above and beyond any time spent viewing the video. A significant percentage of news consumers spend a significant percentage of their time viewing news videos in addition to — or rather than — reading news articles, and this has important implications for publishers’ content creation and distribution strategies, as well as their bottom lines.

Furthermore, those viewers who watch a significant amount of video on their first visit to a site are significantly more likely to return than individuals who only visit a page. In terms of engagement, video viewing may compete with reading of accompanying page content, but that is certainly related to pre-existing news consumption habits and preferences of users. Given the abundance of media content available to consumers, publishers should strive to provide quality content in accessible formats tailored to individuals’ experiences and preferences.

Chartbeat is an analytics platform that offers audience and content metrics in real time.

Burton DeWilde is a Data Scientist at Chartbeat, where he works on data products that help publishers track their performance through meaningful metrics. He has a background in media research and particle physics.