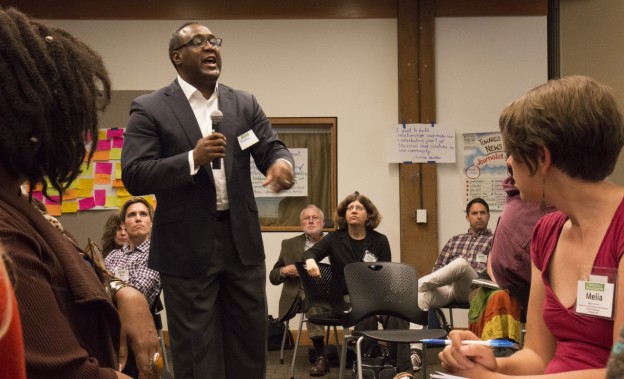 
"As journalists, we should be more transparent about the fact that we’re not neutral about the health of our communities." - Joy Mayer

On the last day of the Experience Engagement “un-conference” in Portland, Oregon, University of Oregon (UO) junior Kaylee Tornay took the microphone to reflect on her experience.

“If my work as a journalist could be represented in my body, I’d say my strong arm is my right arm. It’s the side that loves journalism, writing, multimedia,” she said. “And engagement is the weaker left arm. Before I came here, I liked to ignore that part of my body. This conference made me realize I need to work the left side so that I can reach with both hands in equal strength and work with my community to make the difference I want to make.”

Judging from all the welled-up eyes in the room, Tornay’s reflection struck a chord. Just three days earlier, the 19-year-old had arrived at the conference with only a vague idea of what it meant to practice community engagement in journalism. But she was leaving a believer, determined to integrate engagement approaches into her future work as a journalist.

How can educators help students like Tornay strengthen their engagement arms? Based on conversations with students and educators at Experience Engagement, here are four ways to weave engagement into an undergraduate curriculum.

Part of a visual map illustrated by Nitya Wakhlu at the Experience Engagement conference. Photo by Emmalee McDonald.

UO instructor Lori Shontz still remembers the lesson in objectivity she received as a young reporter. “I was taught that as a journalist, you are an observer,” Shontz told me. “Even today, I have a hard time explaining to some journalists of my generation what I’m talking about with community engagement. They think I’ve gone off into loony land.”

But Shontz is hardly the only one challenging traditional notions of objectivity (see Bill Keller’s riveting discussion with Glenn Greenwald for a taste of the debate). Even among mainstream journalists, there’s a growing willingness to split from the role of “neutral observer”  — especially if the goal is engagement.

An example of this shift unfolded at The Columbia Missourian last January, when one of Joy Mayer’s student reporters visited a Walmart store to ask shoppers about the city’s proposed plastic bag ban — only to learn that most folks knew nothing about it. Instead of writing another traditional news story about the ban, the reporter instead returned to Walmart and handed out flyers explaining the city’s plastic-bag proposal to shoppers.

Under the old rules of “objective” journalism, that kind of work would have been a no-go. But Mayer sees those rules changing. “As journalists, I think we should be more transparent about the fact that we’re not neutral about the health of our communities,” said Mayer, an adjunct professor at the University of Missouri School of Journalism. “Distributing informational flyers might be activism, but it’s activism on behalf of the health of the community.”

So what does a revised definition of objectivity look like? UO junior Franziska Monahan suggested that journalists “think about objectivity through the lens of fairness, kindness and empathy.” Others at Experience Engagement pointed to the distinction between “advocacy journalism” and journalism that presents possible solutions — a line widely discussed in the emerging field of “solutions journalism.” As David Bornstein, co-founder of the Solutions Journalism Network, told the American Press Institute in 2014:  “Solutions journalism is simply critical and clear-eyed reporting that investigates and explains existing credible responses to social problems. It is explicitly not about trying to promote ideas or pick winners or the best models for addressing problems.”

But some observers believe solutions journalism could go even further in reshaping the notion of objectivity. In an article by Nieman Reports, MIT Center for Civic Media’s Ethan Zuckerman suggested that purposeful advocacy — the kind embraced by sites like RYOT News and Zuckerman’s Global Voices — has an important place in journalism.  “Is it enough that we find a solution if it is a solution that our viewers or our readers can’t be a part of?” Zuckerman asked. “For me, that’s the most challenging feature of this. Can we give our readers something positive and constructive to do?”

There are signs that journalism schools might be ahead of the newsroom curve in this approach to engaged journalism. For example, CUNY’s graduate program in “social journalism,” launched in 2014, conceives of journalism as “a service that helps communities meet their goals and solve problems.” In a recent Observer post, CUNY’s Jeff Jarvis predicts that these social journalists will take to the industry a fundamentally different understanding of “engagement” in journalism. “Social journalists do not brag about their traffic, their Facebook “likes” or their viral content,” he wrote. “They’re concerned about the impact they have.”

In my two years teaching intro-level journalism classes at the UO, nothing seemed to strike more fear into my students than being asked to talk with strangers.

“I’ll admit, there have been times when I’d do anything possible not to talk to anybody else,” Tornay said, confirming my hunch. “When professors set a three-source minimum, it might as well be a maximum.”

The hard-luck news for students: Community engagement requires talking with more people, not less. And the nature of those interactions changes too. As I wrote in yesterday’s post, engagement requires journalists to listen to their communities before they start interviewing — a process that’s more about identifying pressing community issues than about probing for quotes.

Shontz says it’s also a process that makes the three-source minimum insufficient. “When I assign a story now, students have to report how many people they’ve talked to, and they can only quote a certain percentage in the story,” she explained. “That’s something I’ve changed.”

UO’s student publications are also experimenting with new modes of community listening. Last week, for example, the university’s award-winning student magazine Flux invited students, faculty and other community members to help inform the editorial focus of this year’s issue about race and diversity on campus.

The community conversation, which drew about 40 participants, including representatives from the Black Student Union and the UO’s Office of Institutional Equity and Inclusion, gave Flux staffers the opportunity to bring new voices and perspectives into their “story seeding” process.

“There was some rich dialogue,” said Andrew DeVigal, chair in journalism innovation and civic engagement at the Agora Journalism Center. “It was a great experience for the student journalists to listen to learn, rather than listen to tell.”

In journalism schools, we’ve traditionally taught students that their work is finished once the story is filed. But when the goal is engagement, the release of a story should be just one step in an ongoing conversation. What did the story get right? What was it missing? And perhaps most important, where should the reporter go next?

“It’s not enough to just throw a story out there and be like, ‘See ya, I’m going back to my little watchtower now,’” Tornay said. “Journalists should bring the process full circle.”

Tornay and others suggested a process that requires students to actively solicit feedback from community members following a story’s release. As UO senior Sami Edge explains, that feedback loop would help hold students accountable for the quality of their work.

“I think the standards for publication are very different from standards for class,” she said. “Requiring students to go back and get on-the-ground responses could help fix that.”

When evaluating student work, it makes sense that we’d look for a compelling lead, a clear establishing section and a breadth of sources. But none of these measures captures whether a student is effectively connecting with the community. According to Mayer, evaluating for community engagement requires educators to ask whether useful information is getting to the community members who need it most. This process doesn’t have to be flashy, she says, so long as it’s effective. “In journalism schools, we’re so focused on telling the best possible story according to our own internal metrics,” Mayer explained. “But what if no one consumes it? If our newsroom produces a 3-minute video with a beautiful ending, and the average time spent on that page is only 45 seconds, who gets to decide if it was a great ending?”

One way to teach and evaluate for engagement is by adding assignments that focus more on impact than output. For example, instead of requiring students to write a 750-word story on education policy with at least three sources, instructors could ask students to identify a specific information need within a community of teachers, students, parents or school administrators. The student reporters would then develop a creative plan to meet that need — and whether their format of choice is a long-form investigative feature or an active Twitter account, they’d be graded on the content’s utility, not its length or style.

In addition to these steps, Andrew Haeg, founder and CEO of GroundSource and a recent entrepreneur-in-residence at Mercer University’s Center for Collaborative Journalism, says it’s important to also think about journalism’s macro-level reward systems. For example, when a student journalist crafts a riveting narrative or produces a beautiful multimedia story, the Hearst Journalism Awards (the Pulitzer Prize of college journalism) offers a chance for validation and national recognition. But for journalists who excel in community engagement, there’s not a comparable honor.

“If we’re going to build a culture around engagement, we need to lead it and define it,” Haeg said. “In journalism, we pop the champagne cork when people win awards. So how can we celebrate engagement in the same way?”

One response to “4 Lessons for Teaching Engagement”