Mediatwits #172: How Engagement Editors Rise Above the Social Scrum 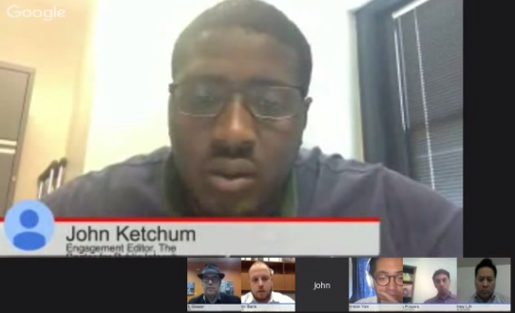 The Center for Public Integrity's John Ketchum describes common misconceptions about the role of an engagement editor.

The days when social media engagement meant assigning an intern to run your feeds are long over. At least, that’s what we heard from The Atlantic’s Matt Thompson on Episode 162 of the Mediatwits. You have to have creativity, analytical skills, reporting capabilities, good judgment and strategic sense to be an “engagement editor,” the new vogue title in digital newsrooms. The high bar makes sense considering the impact engagement editors have on audience perception. Engagement is no longer about just keep track of letters to the editor or patrolling the comments, according to Elia Powers in a story on MediaShift. They are often the public face of the publication and, as Jack Murtha describes in Columbia Journalism Review, will have to publish in circumstances that would give other journalists pause. They also have to be aware of all the publishing platforms out there especially as some are calling platforms the future of news. A succinct way of putting it comes from John Ketchum of Center for Public Integrity, who describes an engagement editor’s role as being “a vessel between the audience and the staff.” We’ll ask our guests to decode the job of the engagement editor on this week’s Mediatwits with guests Justin Banks, deputy editor of audience for the New York Times; John Ketchum, engagement editor at the Center for Public Integrity; Elia Powers, assistant professor of journalism and new media at Towson University; and regular guest Andrew Lih, at American University. MediaShift’s Mark Glaser will host, with Jefferson Yen producing.

"There's a misconception [in the newsroom] that we can put a magic sauce on every single story, no matter what kind of story it is, and it's going to be the most talked about thing on the Internet." -John Ketchum

Justin Banks is deputy editor of audience development at The New York Times. Prior to joining The Washington Post, where he ran the Post’s audience and digital news team. Justin joined The Post as the newsroom’s first editor for search. He’s on Twitter @bankonjustin

John Ketchum joined the Center from NPR where he worked for Morning Edition. Before that he was at Marketplace as part of a four person team dedicated to covering the income divide in America. John blogged and ran social media strategy for the team. John is excited to break down complex topics in a way that people can understand in the social space. He believes that now more than ever, people want to understand the world around them. This means meeting them at the mediums they use. Follow him @Ketchcast

Elia Powers, is an assistant professor of journalism and new media at

Towson University. His main research interests are audience engagement with digital media; news, media and health literacy; and nonprofit journalism. He has taught courses such as news writing, multimedia reporting, journalism history, journalism ethics, mass communication research and media literacy. As a journalist for more than a decade, he has covered media, higher education, health, business, sports, the environment and the arts for publications such as The Los Angeles Times andInside Higher Ed. He is currently a contributor to MediaShift. He’s @EliaPowers on Twitter

Just in case we haven’t hammered home the importance of platforms for you, here’s what other people have been saying. The Awl’s John Herrman has been writing on the existential dread publications have concerning platforms. If his assertion that links are the least important component of most Twitter articles than the role of the engagement editor becomes that much more important. This isn’t considering the changes that Facebook’s Instant Articles or Twitter and Google’s rumored joint project competing with Instant Articles might have on the industry. But social platforms have capture the attention of publishers and it’s not just because of the audience numbers that they can provide. They are also places where important discourse can occur and publishers such as the Los Angeles Times are paying attention.

But what makes a social media editor different from an engagement editor? A lot of what engagement editors do is on social media. Julia Haslanger followed The Nation’s Annie Shields around for a day and this is what she found. You could lump some of what Shields does for The Nation under social media manager, tasks like promoting stories and monitoring platforms, for instances. But she also helps craft headlines, edits the home page, and tests new elements on the website. The overlap between engagement and social media editor is changing because the position is relatively new in journalism and the terms are still relatively fluid.