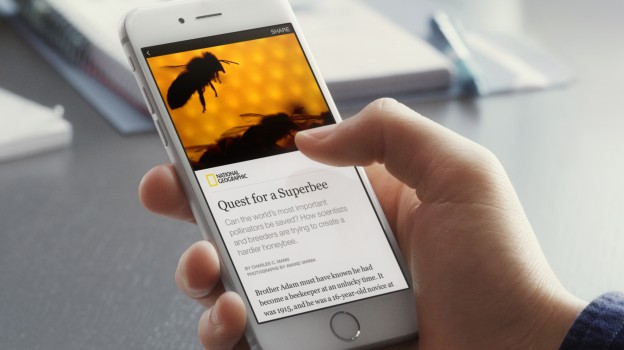 For some time, Facebook has been in an elaborate dance with large news publishers, hoping to sweep their content off publishers’ sites and onto Facebook. While publishers have been wary of giving up control, many signed up for the new Instant Articles feature on Facebook’s iOS app, helping load their content quickly instead of the usual 8-second delay. But all media watchers aren’t necessarily welcoming it with open arms. They worry, understandably so, that in the transition to a mobile platform, their share of revenues will shrink just like it did from print to digital. But the social giant has offered some concessions, letting them keep all the ad revenue they sell themselves; they can also let Facebook sell ads and still get 70% of revenues. The key here is control. The social media giant has limited not just the number of ads publishers can add to their content but also the kinds of ads. And while the revenue split may seem to favor publishers, who’s to say Facebook won’t change the rate in the future?  Facebook has become such a large source of traffic that should they decide to change the deal, many publishers would be hard pressed to walk away. Joining us this week to discuss Facebook Instant Articles will be John Herrman, editor at The Awl; Deepa Seetharaman, reporter at the Wall Street Journal; Michael Sebastian, reporter at Ad Age; and regular guest Andrew Lih at American University. PBS MediaShift’s Mark Glaser will host and Jefferson Yen will be producing.

"I think it's kind of mistake to assume Facebook is regarding the news media as an equal partner or as an industry whose concerns it needs to address" - John Herrman on Facebook's Instant Articles feature.

John Herrman is co-editor of The Awl. He previously worked at Gizmodo, Popular Mechanics, and most recently Buzzfeed, where he wrote about the structure and culture of the internet. He lives in New York. Find him @jwherrman

The big fear with FB’s new feature, as John Herrman writes, is “Instant allows publishers to hand over nearly all of their mobile business to Facebook.” Mobile readers are becoming increasingly important to publishers. Pew’s State of News revealed more people are visiting news sites on their phones and tablets than on their desktops. Mobile ads accounted for 65 percent of Facebook’s ad revenue last year — that’s $7.5 billion. But not everyone thinks Instant Articles will be a problem. Vox’s Timothy B. Lee writes that while Facebook’s leverage over the publishing industry is problematic, Instant Articles could lead to more people reading the news.

Is it any wonder that a tech company like Facebook would be more ready to capitalize on readers moving to mobile than publishers? It’s still too early to tell whether Facebook’s Instant Articles constitutes an inflection point for the industry. Let’s just get it out of the way: Facebook’s Instant Articles is a fast and also, subjectively speaking, prettier way to read the news on your mobile device. For most people, that’s reason enough to use this app. But it does reflect poorly on the experience of using the mobile web. That’s why Snapchat is trying to get into the news. It’s the same reason major publications feel the need to create stand-alone apps. The field is still wide open in mobile, and Facebook isn’t the only one player on the board.

What’s the end game for Facebook and publishers? Can they co-exist and both benefit? Or should publishers remain wary of the social giant?