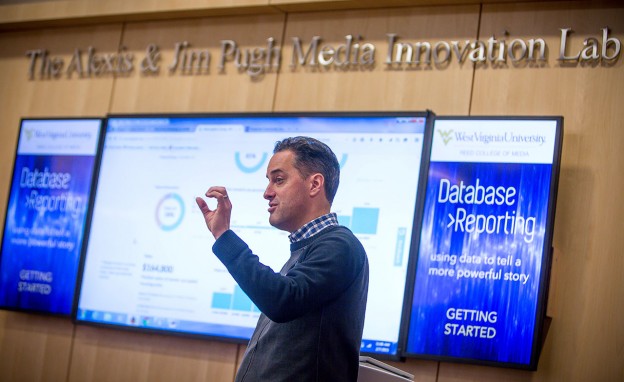 When I moved to Morgantown almost three years ago to teach journalism at West Virginia University, the sketchiness of the local news coverage shocked me. The one newspaper that covers the Morgantown area is owned by a family who have amassed a fortune in the coal and limestone industries, and the paper either doesn’t know how to do investigative journalism or doesn’t want to. So when Journalism program coordinator John Temple approached me with the idea of starting a news service so that students in our Multimedia News Publication classes could publish their work, I hopped on board.

"The goal was to forge a working partnership between the university and professional news organizations, giving them quality content and allowing our students to showcase their work."

I thought that perhaps this service, which we named the Mountaineer News Service, could be a way to provide quality, data-driven journalism not only to local residents but to financially strapped news outlets throughout West Virginia that have been hard hit by the Internet’s assault on their traditional business model (advertising). The goal was to forge a working partnership between the university and professional news organizations, giving them quality content and allowing our students to showcase their work.

Our initial plan was to distribute student-generated content through the West Virginia Press Association, which agreed to send its member papers our story budgets with links to the multimedia features on the news service. But that soon hit a snag because the Press Association lacked the resources to send out the stories in a timely manner and only a few newspapers picked up the content. So I began reaching out directly to some individual newspaper editors as well as national environmental news sites, which picked up several of the multimedia packages published on the Mountaineer News Service. Here is one story that Mother Nature Network published on the struggle to develop alternative energy sources in West Virginia.

Then last fall, the College of Media hired as its Ogden Newspapers Innovator-in-Residence, Derek Willis, an interactive developer and data journalist from the New York Times. Willis was assigned to work on a data-driven elections project with students in two classes, including my Investigative reporting course. The goal was for students to use data to cover the midterm elections in West Virginia in a more granular way that many regional news outlets were doing.

Willis showed the students in my reporting class and in our data visualization class, taught by my colleague Bob Britten, how to access and analyze voter registration rolls in five counties of the state. He also showed the students how to access, sort and analyze (using Microsoft Excel) campaign financing data filed by candidates for several statewide races to the Federal Elections Commission. The students used this data as a springboard to develop interesting story ideas, which they then reported out.

My students learned a number of valuable lessons from this exercise. First, just because they had the names, phone numbers and voting history of individual West Virginians, didn’t mean that voters would respond to cold calls, particularly from journalism students. After getting hung up on many times, a few of my more enterprising students began knocking on doors (they also had voter addresses) and began finding more receptive sources. As one of my students later noted, this taught her an important lesson.

“Most people don’t like to talk about politics and a soon as the word ‘Senate’ or ‘election’ was throw into the conversation, many people shut down immediately,” said Caitlin Coyne, a sophomore journalism major. “This, however, had an upside because it forced me to become more persistent as a journalist.”

Through their persistence, Coyne and a classmate were able to find great anecdotes and quotes to flesh out a data-driven story showing the rise of independent voters in West Virginia over the last decade. (While voters were leaving the Democratic party in droves, they weren’t flocking to the Republican party. Instead they were registering as Independents or with no party affiliation, which gave them more flexibility in voting in both the primary and general elections). The students’ story was published first on the class blog we set up for the elections project and then picked by The Journal in Martinsburg, West Virginia, the Sunday before the election.

A few weeks later, students in the data journalism class published a compelling graphic that broke down this increase in independent voters in county-by-county detail. It would have been better, of course, to marry the text story with the graphic and distribute them both at the same time to professional news outlets, but the delay in publishing the graphic illustrates one of the bigger problems we encountered in our effort to bring together two classes in one project. While most of the students in my reporting class had some prior experience with news reporting, most of the students in the data journalism class had never done a graphic before. Learning those skills took longer than expected and they missed the first deadline we set for publishing stories that we could share with area media.  Lesson learned: If different classes collaborate again on a future project, we need to bring the students in those classes together earlier to work as teams in developing multimedia content for a deadline.

On the whole, however, the elections project was a great success in forging a working partnership with a growing number of West Virginia news outlets. Several newspapers, including The Journal in Martinsburg and the Huntington Herald-Dispatch, published a number of student-generated election stories examining how the state’s coal culture was driving voting trends and the role outside spending from corporate and conservative groups played in the landmark race to replace West Virginia’s longtime senator, Jay Rockefeller. West Virginia editors I spoke to afterward said they were impressed with the enterprise content our students delivered and would be interested in picking up more stories in the future.

“The articles provided to us by WVU students during the 2014 election helped us fill Sunday editions of our newspaper with high-quality, well-researched content of immediate impact on our readers,” said David Emke, regional editor of The Journal. “Keep them coming.”

As part of our efforts to forge a partnership with area news organizations, Derek Willis, myself and other faculty led an all-day free data workshop for reporters and editors from area papers. Journalists came from as far away as the Pittsburgh Post-Gazette and the Charleston Gazette and we had representation from radio (West Virginia Public Broadcasting), as well. The workshop, which was funded by the Ogden Newspapers Seminar Series, not only reminded everyone about the wealth of data available online (ranging from demographics, election financing and labor statistics to crime and corporate information), but Derek also showed participants how to use Excel spreadsheets to sort and analyze data in different ways.  The reporters who attended the workshop found it highly beneficial.

“This was very inspiring,” said Rich Lord, an investigative reporter with the Pittsburgh Post-Gazette. He said he could use some of what he learned about Excel’s Pivot tables “right away” and then asked when we were going to do another data workshop.

Glynis Board, a public radio reporter, said the workshop had been a great refresher for her. “The compilation of all the sources and information you showed us is invaluable,” she said. “And I’ll be able to turn this around for an instructional day in our newsroom.”

This semester, my Multimedia News Publication class (the capstone class for senior journalism majors) will once again be preparing stories for the Mountaineer News Service. Now that we have established a reputation for quality, data-driven work, I’m hoping that the multimedia packages the students put together (which include a written feature on a timely issue, two photos with captions and a short video or audio slideshow that complements the text story) will be picked up by a greater number of regional news outlets than before.  My dream is to build the news service into a reliable source of student-generated content that can help fill the gaping hole in watchdog journalism that exists in many parts of West Virginia.

Alison Bass is an assistant professor of journalism in the Reed College of Media at West Virginia University. She is the author of the forthcoming book, Getting Screwed: Sex Work and the Law (Fall 2015), and Side Effects: A Prosecutor, A Whistleblower and a Bestselling Antidepressant on Trial, which won the National Association of Science Writers’ Science in Society Award in 2009.