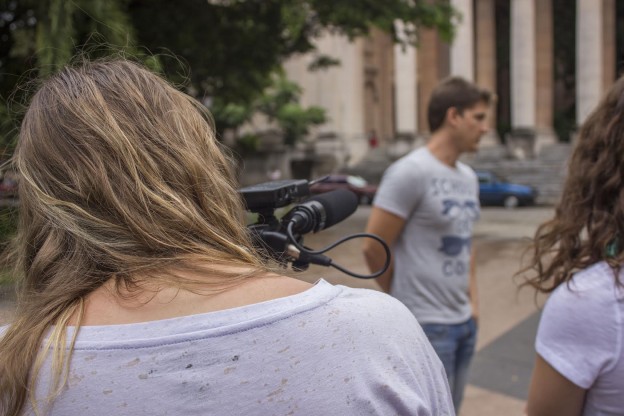 Washington State University journalism and media production students interview a student at the University of Havana last May. Photo by Marc Wai

Before we departed on the 45-minute charter flight from Miami to Havana, Cuba, last spring, my students and I made a pact: No Facebook. No Twitter. No social media.

We went so far as to turn off the GPS tracking on our phones, concerned that Cuban officials might fret about our digital footprints as we moved about Havana and up and down the coastline. We were headed to one of the least-wired countries in the world, a place where WiFi equipment is banned without a government permit.

The social media blackout held throughout our 12-day trip through Cuba’s media outlets, from the newsrooms of Radio Havana to the offices of Granma, the official newspaper of Cuba’s Communist Party. For my 17 students, the concept of a trip without social media may have been as antiquated as the old Fords and Chevys rumbling down Havana’s malecon.

“Internet withdrawal definitely took hold of me,” one student wrote. “But after a few days I actually enjoyed being cut off from the Internet.”

A self-imposed social media blackout where it’s the norm

Marc Wai, a junior at Washington State University, filmed in the streets of Havana, Cuba, last May. Photo by Tesia Lingenfelter.

Without iPhones as an easy out, the students conversed on long bus rides or over group dinners. Expensive smartphones became cameras. I didn’t field a single complaint about missing status updates. For students raised in a digital generation, the blackout seemed a welcome respite from the constant hum of 21st century online life.

For U.S. students, it is an instructive experience to consider the power of technology to change societies, as well as the efforts of some governments to curtail the free exchange of ideas, whether through printed media, tweets, or — simply, almost unimaginably, for young digital natives — a lack of access.

On the other side of the digital divide, students at the University of Havana craved online information. College students have strict limitations on access to the Internet on the island. Many print online stories so that they can share hard copies with their friends and family.

Internet cards can be purchased at government-run hotels, but at $10 an hour, the cost is roughly half the average monthly wage of most Cubans. Still, Cuban college students join Facebook and Twitter, though it can be a frustrating experience.

Our social media blackout was self-imposed. As I saw it, the risks outweighed the withdrawal. And, when you teach in Cuba, it is advisable to do so on the government’s terms. Last year, about 100,000 Americans legally visited Cuba, with many traveling on educational visas. U.S. tourism to the island is expected to grow even more this year, as Havana and Washington work to thaw more than a half-century of icy diplomacy.

But tension still exists, and it was evident last spring during our visit. In April, just weeks before our group landed in Havana, the Associated Press had exposed a plan by the U.S. Agency for International Development to set up a “Cuban Twitter,” using a series of front companies to hide the messaging service from government officials. (USAID challenged aspects of the AP’s report.) It was greeted with predictable outrage, whether real, or feigned for our benefit.

At the time, Cuba still held Alan Gross, a contractor with USAID, in detention for bringing unauthorized satellite phones and computer equipment to the island. (Gross was released last December; at the same time, the U.S. released three Cuban intelligence officers who had been convicted of espionage in 2001.) Gross allegedly planned to bring the communication technology to members of Cuba’s Jewish community.

Pressure for greater access is growing, both internally and internationally. Last month, the AP reported that tech-hungry Cubans have built their own private network of linked computers, allowing them to chat, play online games, and share files. Washington is doing its part to encourage expanded Internet access, which it sees as a key step towards loosening the government’s control.

My students and I were keen not to attract any unwanted attention. The digital divide offers a great teaching opportunity: While U.S. students accept that someone, somewhere, is tracking their digital footprints, rarely are they forced to confront and question electronic surveillance as they did in Cuba. It’s impossible for me to know how deeply that lesson was embedded.

At the end of the course, the students boarded our flight to Miami, and rapidly began populating their Facebook feeds with images and posts from the islands. Some students even connected with their Cuban counterparts on social media, though they knew to expect few status updates and impossibly slow responses to messages. That is the tease of technology in Cuba –- a quick, monitored peek at the outside world and then digital silence.

At least for now.

One response to “Lessons from Cuba: Teaching Journalism With Internet Withdrawal”