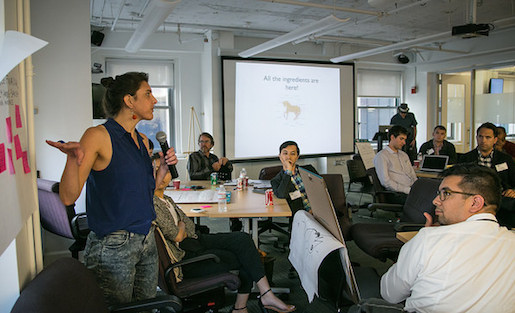 Once again, PBS MediaShift brought together a diverse mix of collaborators from public media, commercial media, academia and beyond for a Collab/Space workshop, this time in Chicago at the TechNexus incubator space. The workshop took place the day before ONA14 began.

We’ve rounded up a collection of photos and tweets from the event, and will add in links to coverage. Did you attend Collab/Space Chicago? Share your experience in the comments, and send us links to any blog posts or stories you may have written, and we’ll add them to the post.

If you missed out, you still have time to register for our next Collab/Space workshop, happening in DC at the Washington Post on November 6 — with a focus on data projects and startups! Register now. And if you want to present a data project or startup, apply here.

My Questions for Entrepreneurs at Collab/Space Chicago, by Brian Reich (Brian Reich Tumblr)

Here’s a Chance to Start Your Own Media Empire, by Sandra Guy (Chicago Sun-Times)

Here’s a collection of photos shot by Kaitlin Hetterscheidt during Collab/Space Chicago:

Here’s a collection of photos shot by Peilin Tan:

Andrew Lapin is a journalist and film and theater critic based in Washington, D.C. From 2012-14 he covered digital innovations in public media for the industry trade paper Current. His criticism has appeared in outlets including NPR, The Atlantic, The Dissolve, Indiewire and Washington City Paper.