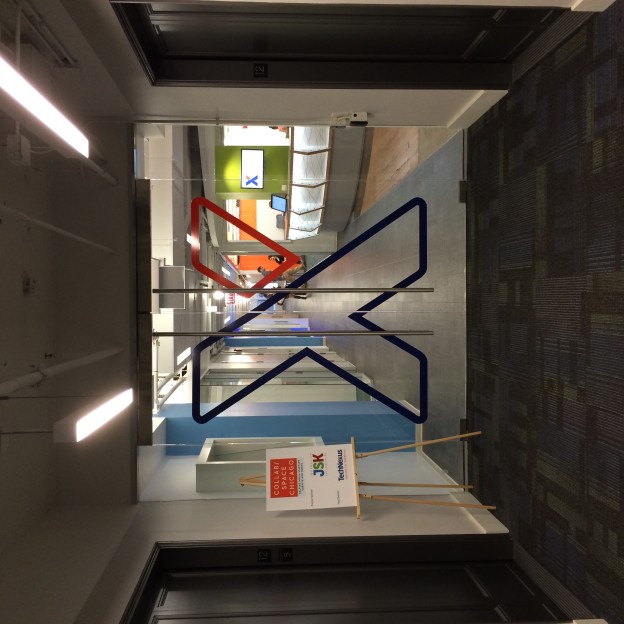 One of the first things David Cohn of Circa said during his keynote talk at Collab/Space Chicago last week was “you will feel like a manic-depressive” when launching a startup. The Collab/Space Chicago crowd, which included hopeful startup presenters, journalists, media pros, and J-school elites chuckled, but everyone in the room knew there was some truth to that.

"I like to be at the table where the decisions are made.” -Doug Mitchell

Cohn knows a thing or two about the ups and downs of startups. During his talk, which was accompanied by a unicorn-themed slide show, Cohn described launching the first version of Circa in 2012 as “miserable” but also a chance to make something useful. He seemed pretty relaxed despite it also being the launch day for Circa 3.0, but he’s been around the block a few times.

David Cohn talks about trolls, unicorns, and the emotional roller coaster of startups.

At Collab/Space Chicago, which took place at TechNexus in the Civic Opera building in downtown Chicago, attendees represented many respected entities in the media, business and journalism realms, including the Reynolds Journalism Institute, WITNESS, the Knight Foundation, CUNY and more. Most were also in town for ONA14, which started the following day.

However, the VIPs of Collab/Space Chicago were the presenters for nine ambitious startups who applied and were chosen for the full Collab/Space treatment.

In the Hot Seat

Here’s a little taste of what happened:

Uniting for a Common Cause

Everyone at Collab/Space was focused on the central goal of helping the new startups make gains toward self-sufficiency; however, in doing so, they were helping to advance media and journalism overall. Terms like native advertising, paywalls, data journalism, and monetization came up repeatedly. These aren’t just issues being faced by new companies; stalwarts of the industry are also searching for solutions, and this event allowed media pros to reach across the aisle, so to speak, to share ideas, confess mistakes, and hit upon company-saving solutions, with audience in mind.

Doug Mitchell, consultant and project manager for NPR, Georgetown instructor and co-founder of

The Journalism Diversity Project, shared the latest about NewU, which has thus far seeded 12 minority lead media startups with grants ranging from $3,300 to $20,000, 10 of which are led by women of color. On why he is behind the scenes on his NPR shows rather than in front of the microphone: “I like to be at the table where the decisions are made.” This was definitely a statement that all of the movers and shakers at the event could nod their head at.

This is not to say that the day was wholly serious. To aid the group in their brainstorming process, MediaShift brought in Andy Boyle, recently of the Chicago Tribune and now of BreakingNews, to facilitate humorous improv exercises first thing in the morning and then again just before the small groups dove deep into key questions for each presented startup.

One morning exercise that was focused on the importance of listening and eye contact had startup newbies and veteran journalists alike pretending to hand each other the heads of celebrities. Overheard in the buzzing room as many imaginary heads were being passed around: “Thank you for giving me Tom Cruise’s head.” You don’t get that at every media workshop.

Later in the day, to help get small groups loosened up for the final push, Boyle gave us the assignment of creating the entire skeleton of a startup based on a nonsense word. That’s easy enough for an experience group in attendance, but there was a catch: no saying “no” allowed — we had to agree to the first idea that was spoken aloud and move onto the next question. The result: pretend startups focused on helping daters with no game, not-so-empty nesters, and people who look at their smartphones too much. Actually … some pretty great ideas came out of this. Perhaps we’ll see them in the next round of Collab/Space.

After a full day of innovating and brainstorming, attendees headed a few steps south to Rittergut Wine Bar & Social Club for some networking and refreshments. Everyone earned their beverage that day.

Collab/Space Chicago, which took place the day before #ONA14 began in the same city, was the fourth such gathering produced by MediaShift. Previous events in Berkley, Atlanta, and New York have received such positive feedback that this is becoming an increasingly frequent event: The next Collab/Space event is planned for November 6 in Washington, D.C., at the Washington Post headquarters, with a focus on data projects and startups. Register here. If you’d like to present your data project or startup, apply here by October 6.

All photos by Julie Keck.

Julie Keck is a social media consultant and filmmaker based in Chicago. The bulk of her film work is created for tellofilms.com, a niche video site, for which Julie serves as the Chief Creative Officer. She has spoken about social media engagement, crowdfunding, and film at SXSW, the University of Notre Dame, Columbia College, DePaul, the Chicago Documentary Film Summit, the Chicago International Film Festival, and more. Julie is also the social media and newsletter editor for PBS MediaShift. You can find her on Twitter at @kingisafink.