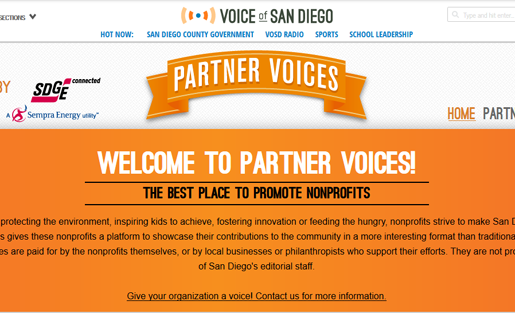 Voice of San Diego's Partner Voices publishes article-length “partner promos” that are either paid for by the non-profits themselves, or on their behalf by a corporate sponsor.

SAN DIEGO –– Online banner ads only have so many pixels. On news sites, small digital squares and rectangles tend to work best for advertisers proclaiming a concise message, like “click here for an insurance quote” or “browse our summer clothes catalog.”

In Southern California, non-profit organizations wanting to reach the Voice of San Diego’s civic-minded audience have long raised doubts that a banner ad could effectively get their point across. “It wasn’t enough space for them to really explain and educate people about their mission,” said Mary Walter-Brown, Voice of San Diego’s vice president of advancement and engagement.

“Make very clear what type of organization you are and why you’re doing this, because there is a different level of scrutiny for non-profits." -Kevin Davis, executive director, Investigative News Network

So last month, San Diego’s pioneering online news startup quietly debuted a native advertising program aimed at fellow non-profits. The program, called Partner Voices, publishes article-length “partner promos” that are either paid for by the non-profits themselves, or on their behalf by a corporate sponsor.

The promos, which carry a monthly fee of $1,500, are clearly labeled as sponsored content. Voice of San Diego’s editorial staff has no role in producing them.

“This was our way to approach native advertising in a fresh, new way that we felt was more in line with our mission,” Walter-Brown said.

Walter-Brown said the sponsorship option gives Voice of San Diego a new way to cultivate revenue from corporate clients who want to publicize their support for civic initiatives. For example, she said, San Diego Gas & Electric is sponsoring 12 Partner Voices promos over the course of a year.

“It allows us to go to an organization or a company that might not have been a traditional advertiser before, but present them with a new opportunity to just build their brand and build their community goodwill,” she said.

Voice of San Diego is one of several non-profit news outlets to recently join the wider media world’s adoption of sponsored content, also called native advertising. Display ads are confined by the boundaries of the box, but sponsored content allows advertisers more room to make their case — an intriguing option for policy-minded organizations whose arguments and causes are difficult to boil down to a snappy slogan.

Making fuller arguments to an influential audience is a key selling point for The Texas Tribune, which last month began offering “paid placement” to corporate sponsors through its new op-ed site, TribTalk. As outlined in the TribTalk media kit, the Tribune charges $2,500 for a three-day run on the TribTalk.org homepage, although permalinks for sponsored content stay up indefinitely.

April Hinkle, the Tribune’s chief revenue officer, said she pitches TribTalk’s paid placement as an opportunity “for thought-leading organizations to be able to post and lead a discussion” beyond what banner ads can provide. Sponsored posts are labeled as such and published against a gray backdrop to distinguish them from unpaid op-eds.

“The goal is to be just as high-quality and thought-provoking as the user-generated (op-ed columns),” Hinkle said.

Just weeks before Voice of San Diego and The Texas Tribune unveiled their sponsored content initiatives, Southern California Public Radio won a $35,000 INNovation Fund grant for a pilot program to explore how non-profit news outlets can tap into native advertising.

In its grant application, the radio network bluntly summarized the challenge non-profit news outlets face when ramping up their revenue strategies: “For fear of alienating its audience, public media has cautiously avoided monetizing its content in an overtly commercial manner.” With the grant, Southern California Public Radio says it hopes to “map out the common ground between the interests of its audience, underwriters, and journalistic principles.”

To bring together those potentially competing interests, it is crucial for non-profit news outlets to clearly explain how native advertising supports their mission, said Kevin Davis, executive director of the Investigative News Network.

“Make very clear what type of organization you are and why you’re doing this, because there is a different level of scrutiny for non-profits,” Davis said. “Go to the ends of the Earth to say, ‘We are a non-profit, we are mission-driven, and this is an authentic way of furthering the mission –– not just making money.’”