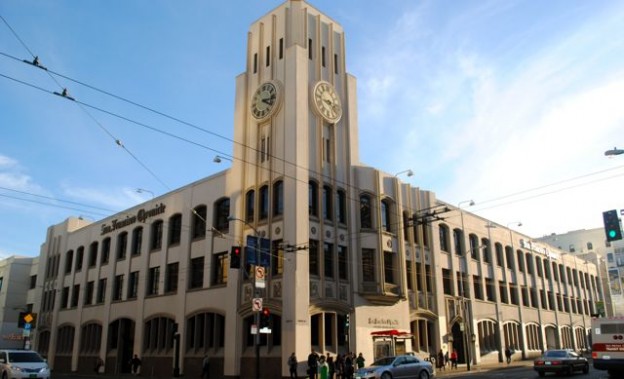 After two decades of being pummeled by savvy tech companies that have stolen its readers, its advertisers and perhaps even its place as the leading media company in town, the San Francisco Chronicle has decided to fight innovation with innovation. The Hearst-owned newspaper is launching an off-site startup-style incubator designed to retrain and reinvigorate the staff and ultimately save the news organization from extinction.

“The idea of the incubator is obviously inspired by business practices of companies that have been successful in our local economy and using modern approaches to this disrupted economy that we are in,” said Audrey Cooper, who cooked up the concept last fall, just a few months after becoming the first female managing editor in the paper’s 148-year history. “We’re trying to use this to turn around a legacy media company.”

"They’re giving people a passage to a new future instead of saying, 'The new future is here and you’ve got to embrace it or you’re not going to make it.’" -John Temple

Cooper, 36, hopes the incubator will help reposition and redefine the Chronicle, which has been losing millions of dollars and thousands of readers every year. In 2012 the leading San Francisco paper dropped off the list of the 25 largest-circulation newspapers in the country and as of March 2013 it had an average daily circulation of just under 219,000, down from 312,000 in 2009, according to the Alliance for Audited Media.

“We hope to eventually get to the point where instead of being a newspaper company that produces websites we think of ourselves as a digital company that also produces a newspaper,” Cooper said. “Unless you flip that switch I don’t think any newspaper will be truly successful at negotiating the digital switchover.”

The Chronicle plans to launch the incubator in early February — or as soon as the new furniture arrives in the cushy office space around the corner from the newsroom where the newspaper has housed its elite food department staff.

A Legacy Newspaper in a Digital World

Set in a grand old building in the heart of San Francisco’s techie South of Market district, the Chronicle has watched as the digital revolution has frothed around it. The newspaper’s offices are just a few blocks away from the headquarters of Twitter, Craigslist and other digital media companies, yet the newsroom looks like it could be the set for “All the President’s Men,” except for the computers sitting on every desk.

Cooper points to a black-and-white photo of the Chronicle newsroom from the 1950s on her bulletin board and then gestures to the newsroom beyond her glassed-in office.

“You look around this newsroom and it looks like it did in that photo in 1958,” she said. “The only thing that has changed is that now we have some women. It’s great we have the history and the dust and stuff that makes newsrooms such eclectic places but it’s very difficult to change your behavior if you’re still in the place that was publishing a newspaper in 1958.”

In addition, she said, “It’s important to get the staff away from me saying, ‘What do you have for Page 1?'”

Cooper plans to send teams of about 20 employees at a time — a mix of reporters, editors, photographers, copy editors, designers, programmers and graphic artists — to the incubator and have each group spend 8 to 12 weeks “or as long it takes” in a digital/social media boot camp. The first team to go through the program is what used to be called the business section, although Cooper is rethinking that designation, along with just about everything else.

“This will seem odd to anyone who doesn’t work in a newsroom but right now our workflow is set up to produce a newspaper,” Cooper said. “People come in at 10 o’clock but they’re here until seven sometimes. We need to get it so people are here to produce a website.”

Cooper envisions the team in the incubator starting at 8 a.m. sharp with a brief but efficient stand-up meeting where the staff will talk about the news of the day and what needs to get up quickly. The print newspaper will be put together after content is posted digitally.

Each week the incubator will bring in experts (some from the main newsroom, some from other companies) to train the staff in specific skills — writing for digital media, search engine optimization, social media, peer editing, writing with voice — and then the staff will experiment in real time with what they’ve learned. Reporters will learn to track online analytics and play with social media tools.

“We’re experimenting,” said Assistant Managing Editor Kristin Go, who has been tasked with leading the incubator. “Part of what we realize we need to do is fail and learn from those failures and figure out how we can do better next time. ”

Cooper wants to see the Chronicle think strategically about wooing back readers who have fled to specialty publications, blogs and alternative media sources by putting the news organization’s digital properties front and center.

“The question is how do we make sure that our reporting is getting to the people when they want it and on the platform they want it and how do we fight back all these specialty niche digital publications that are frankly eating our lunch when it comes to getting eyeballs on stories,“ Cooper said.

In addition to retraining the staff, Cooper hopes the incubator will inspire employees to think creatively about new products and services the news organization can develop to better serve its current readers — and to attract new ones. “The ideal outcome of this is that people will start to think of new things that we can do,” Cooper said.

Ultimately, Cooper hopes to transform the culture of the Chronicle newsroom.

“This needs to be a team,” Cooper said. “It sounds obvious but when everybody’s in silos we’re not as strong as when we’re all working together.”

Cooper said the reaction from the staff has been “overwhelming. I’ve been really overcome by how excited people are.”

But privately, some reporters worry about what the future will bring.

Reporter Carl Nolte, who has worked at the Chronicle for 52 years, said the younger people in the newsroom seem to be more interested in the incubator than “us aged, antique guys.”

“It’s like anything else that involves change. People get nervous. They’re apprehensive.”

Nolte understands print is struggling but he admits, “I’m not a great guy for tweeting. I’m on Facebook but I try not to look at it too often.”

A Passage to a New Future

Cooper said the idea for the incubator grew out of a conversation with John Temple, a senior fellow in the John S. Knight Journalism Fellowships program at Stanford and a former managing editor of the Washington Post as well as the former editor of the Rocky Mountain News and the founding editor of Honolulu Civil Beat.

“This approach seems pretty constructive,” Temple said of the incubator. “They’re giving people a passage to a new future instead of saying, ‘The new future is here and you’ve got to embrace it or you’re not going to make it.’”

Temple noted that the Chronicle is not alone in seeking innovative solutions to the problems facing the newspaper industry. Advance Publications, owner of the (Cleveland) Plain Dealer and the Times Picayune in New Orleans, and Digital First Media have experimented with retraining their staffs and rethinking their operations.

Getting journalists out of a traditional newsroom, Temple said, “is a good way to try to break people from the habits they’ve developed. Over time you have to think the whole Chronicle newsroom may become like the incubator. They’re incubating a new way of doing their work — or at least they’re trying to.”

Can Newspapers Also Be Tech Incubators?, by Mathew Ingram (GigaOm)

Disruption from the Inside: Media Companies Seek Hope in Incubators, by Hamish McKenzie (PandoDaily)