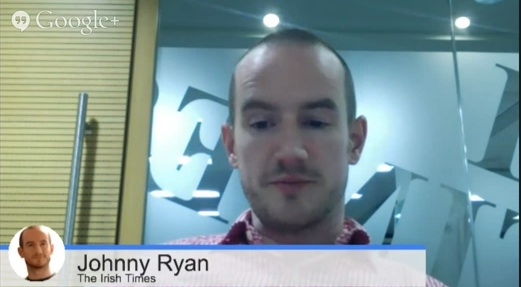 Johnny Ryan of The Irish Times joined the podcast to discuss the newspaper's Fusion incubator for media startups.

From Hearst to Warner Bros., many media giants are opening their doors to startups, creating incubators within their companies to develop media startups, or starting venture arms to invest in them. Many of these startups focus on content and advertising for digital environments. The relationship is symbiotic: while startups receive funding and a platform, traditional media companies gain an infusion of new ideas. This week, we’re joined by Joe Anto of Digital First Ventures, a venture capital firm housed inside of Media News Group and 21st Century Media, Johnny Ryan of The Irish Times’ Fusion incubator, and David Austin of Turner/WB’s incubator, Media Camp. We’ll also be joined by our roundtable regulars American University’s Andrew Lih and Monica Guzman from the Seattle Times and GeekWire. As usual, PBS MediaShift’s Mark Glaser will host.

Watch or listen to the podcast right here:

As both an entrepreneur and investor, Joe Anto brings a unique point of view to his role at Digital First Ventures. He was the founder and CEO of RumbaTime, a lifestyle brand focused on the watch category.  Joe took RumbaTime from concept to over $2 million in revenue, 2,000 points of retail distribution in seven countries and a successful web business in its first year of operation. Joe also has tons of investing experience: He was a Senior Analyst and Director of Investments for Harbinger Capital Partners (a $5 billion hedge fund based in New York), and prior to that he was at ABS Capital Partners, where he focused on investments in the software and services sectors.

David Austin is  a Senior Director in the Emerging Technology team at Turner and the Program Director for Media Camp, a Turner/Warner Bros. initiative. Prior to coming to Turner just over two years ago he was a Senior Director at Apple Inc for two stints totaling over 17 years. In between the stints at Apple he co-founded a startup and worked for a boutique venture capital firm. Since leaving Apple in 2009 he has also had the privilege of being an investor, advisor, and board member to many angel and venture-backed startups.

Johnny Ryan is Chief Innovation Officer of the Irish Times. He is also an associate on the emerging digital environment at the Judge Business School of the University of Cambridge. His second book, “A History of the Internet and the Digital Future” is on the reading list at Harvard, Stanford and other top tier institutions. As well as the Irish Times, his writing has appeared in Fortune, Contagious, BusinessWeek, Wired, NATO Review and Ars Technica.

With new investments in in-house incubators, media companies seem to be betting their futures on startups. At the Irish Times Fusion incubator, a competition that just finished its second year whittles hopeful startups down to a group of ten companies that create novel user experiences. This year’s winner and runner-up companies, FrockAdvisor and GetHealth, earned “Startup-in-Residence” status at the Irish Times, where they will receive more development and a platform through the outlet. FrockAdvisor provides users with targeted clothing suggestions from shops, while GetHealth is designed to deeply engage users in wellness plans. Meanwhile at Media Camp, later stage startups are given funds, training and relationships with established media outlets. Alumni of the accelerator include Chute, a visual media platform that has partnered with CNN and NBCNews.com. Will these startups provide the fresh ideas and innovation that their traditional media funders hope? Is a media outlet really a good place for a startup incubator or accelerator?

Digital First Ventures is no incubator: it’s the venture capital arm of Digital First Media, a massive newspaper chain. The group invests in digital media startups, with the hope that the companies innovate new ways for outlets to make money online. One partner, AdGlue, allows advertisers to select the content that would be paired with the ads, creating an opportunity for the content-creator to reap greater revenue.  Digital First Ventures has also funded OwnLocal, a company that automates digital ad sales for small businesses in local papers. These startups use the Digital First Media platform — the second largest print media group in the country — to expand their influence. In exchange, the media company hopes to gain better footing as it shifts focus from print to digital environments. Could investing in these startups help traditional media outlets innovate? What are some of the drawbacks?