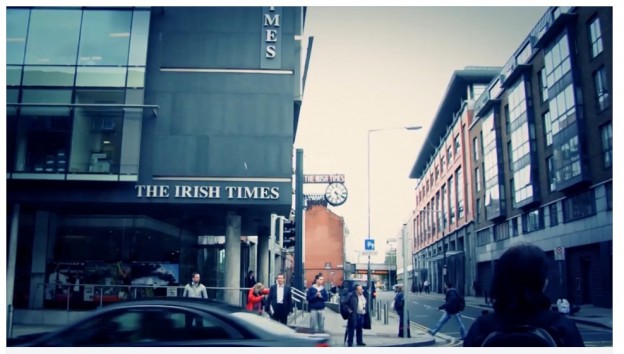 Advertising innovation can frequently just mean different shapes of ads in print, or extra bangs and whistles online to grab attention, or even a social media blitz to promote a brand.

But the Irish Times wanted more. So, with its second annual startup challenge, it insisted on discovering completely new ways to raise money from advertising.

"By seeking out new user experiences that were designed to be compelling in their own right, rather than being designed with advertising in mind, we start with things that people will want to use." -Johnny Ryan

Last year the paper invited startups into their offices and provided mentoring, advice and support, challenging the way the 154-year-old institution did business. Last year’s winner, GetBulb, offering data journalism and infographic services, is in the process of launching its beta version.

(To read about last year’s startup challenge, you can read my MediaShift stories here and here.)

But the paper came away from the challenge feeling it was too broad, lacking focus. For 2013, they have focused purely on advertising, and with global partners, in the form of Irish Times Fusion.

Johnny Ryan of the Irish Times

Johnny Ryan, chief innovation officer at the paper, said the advertising and branding industry was at a “pivot point” and needed to find new ideas.

In the video for the last of the five weeks of Fusion, Ryan explained: “It starts to explore what could be an ad, what should be an ad. What’s a new digital experience that could convey a brand identity. Working with startups is the shortest line for the Irish Times or for anyone else to get to new compelling, consumer-facing experiences. These startups have independently all built compelling experiences online or on mobile. And by working with them over the last five weeks, we have tested and seen and shaped how those experiences can convey some brand experience, where appropriate.”

Ryan explained by email to MediaShift that the approach was to create “compelling user experiences” — ideas for websites and smartphone apps that people wanted, and then consider how to sell a brand within those. None of the 10 finalists had previously considered advertising, he said.

The Irish Times brought in 20 startups to the competition, and the group was quickly culled down to 10 in the first week, as decided by a panel of senior media buyers. At the end of the five weeks, the 10 finalists pitched their ideas to a panel made up of the Irish Times, the Boston Globe, Financial Times, Contagious magazine, and WAZ NewMedia. The goal was to win “real revenue” from advertisers without having to hand over any equity in the startups.

The pitches can be watched briefly here:

Here’s a brief explanation of their offerings:

The FrockAdvisor app won the challenge this year

As the winner and runner-up of the challenge, both FrockAdvisor and GetHealth now have “Startup In Residence” status at the Irish Times for six months.

Ryan said the paper is working with all 10 “radical” startups to find opportunities in the market.

Ryan, also the author of “A History of the Internet and the Digital Future,” told MediaShift: “The idea is that by seeking out new user experiences that were designed to be compelling in their own right, rather than being designed with advertising in mind, we start with things that people will want to use. Only then do we start to explore how those experiences can convey a brand message.

“So, compelling to use first, then advertising second. This is a different approach not only to how the Irish Times generally works, but to how everybody currently works. But the result is something that consumers are likely to want to use.”

A paper of innovation

The Irish Times was the first paper in the U.K. and Ireland and one of the first in the world to go online in 1994. Ryan insisted Fusion was very much about continuing a “sense of innovation.” Being more focused than in 2012 meant the changes within the paper have also been greater.

He explained: “I believe that the advertising and branding industry is at a historical pivot point between the established print and video formats, which are ‘flat’ in the sense that they are looked upon or heard, and new digital formats, which are ‘experiences’ in the sense that they are used rather than merely observed. This is something that goes beyond your reference to social media campaigns. The stars of this new experience-building avant-garde will be engineers and inventors. As their impact grows, the advertisement will begin to look more like a product in its own right, much as some advertisements came to be identified as art in their own right over a century ago.”

According to Ryan, the impact of the startups wasn’t spread around the entire organization but laser-focused on the advertising department alone. That means that all ad team members had a chance to work with startups and immerse themselves in new ideas.

“Each person has had to make the mental leap between working with the inventory that currently exists, and conceiving entirely new inventory that the market has never seen before,” Ryan said.