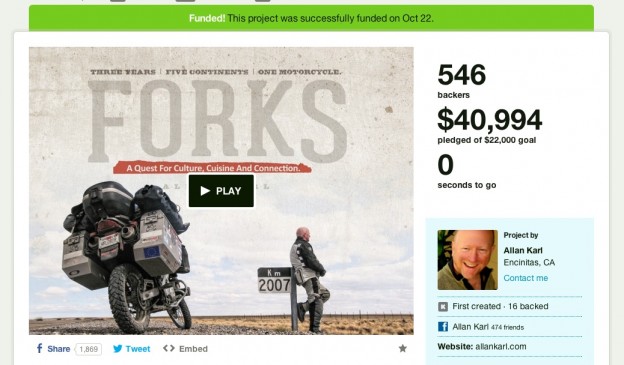 This crowdfunding author success story is part of our PBS MediaShift series on crowdfunding. This author crowdfunding segment is an interview with author Allan Karl who funded his book “FORKS: Three Years. Five Continents. One Motorcycle. A Quest for Culture, Cuisine And Connection” using the Kickstarter platform.

"I wanted to align my project and brand with the best in the business. Today, that’s Kickstarter." -Alan Karl

Friends and family were convinced that he would get sick, hurt, ripped off, kidnapped or killed during his motorcycle journey around the world, but Allan Karl “imagined a world of friendly people as eager as I am to learn, share and connect.” When he returned home, he struggled to find the best way to share the journey with others. “It finally hit me over a dinner with friends: I thought about the connections I made with new friends and the meals and stories we had shared — together.” He promises “an around-the-world adventure with stunning photos, tasty recipes and inspiring stories all wrapped into a beautiful coffee table book” that “combines the best of Anthony Bourdain with Paul Theroux and National Geographic Adventure in a full-color, high-quality book that will bring the splendor of the world into your home and on your table.”

His goals were specific:

I asked Karl to describe his journey with Kickstarter. Here it is, experience and advice, in his words.

“For the most part, Kickstarter created the online crowdfunding category. They’ve got the strongest brand and more awareness, perhaps, than all the other crowdfunding sites together. Plus, the fact that Kickstarter forces project creators to think strategically when it comes to setting a goal appealed to my adventurer and risk-taking personality.

“While Indiegogo provides the option for project creators to accept pledges, albeit at a higher fee or commission, I believe that project creators must know exactly the amount of funding they need and what they are going to do with the funds pledged. If an Indiegogo project creator sets a goal for $10,000, yet will accept just $2,000 if that is all that is pledged, how can this project creator truly complete the project with just 20 percent of his or her goal? It’s not strategic, and it raises huge flags for me.

“As a result, there is a large number of projects on Indiegogo that are not well thought out and often just silly. I think this hurts the Indiegogo brand. I wanted to align my project and brand with the best in the business. Today, that’s Kickstarter.”

“First, if a potential project creator wants to jump into the crowdfunding game, they must understand that running a successful campaign is a full-time job — a lot of work. Second, to do crowdfunding right, project creators must approach their campaigns as a business. That is, they must develop a strategic plan and a strong list of tactics and know how to execute them on a timely basis. Crowdfunding is no place for a procrastinator. At least with Kickstarter, there are a finite number of days, which you determine, to execute a plan and achieve the goal. I started planning my Kickstarter campaign some five months before launching.”

“Third, crowdfunding candidates must not by shy and be willing to ask for they want — and that means beyond friends and family and first-level contacts. Fact is, most Kickstarter project creators will go through their close contacts in the first couple days. So it’s important to build a stronger list by leveraging contacts, referrals, clients and nearly every digital and physical touch point. Get everyone and anyone who is a potential fan or backer to share the project.

“Before I launched my campaign, I had more than 1,000 contacts and categorized and prioritized them. Drive publicity by reaching out to bloggers, media and relevant websites, user groups and forums. As noted above, it’s critical to get awareness well beyond your close network. Bloggers and media are the best way to do this. Much of my five-month planning was focused on identifying and reaching out to bloggers and media.”

“Fourth, less time is better. There is a myth that a longer campaign will have a higher degree of probability to achieve its goal. The reverse is true, and Kickstarter discusses this on its website. I set my campaign at 28 days. I was amazed to see another campaign running at the same time that had set a 15-day campaign and achieved its goal easily. I reached my goal in just nine days and achieved both of my stretch goals before the campaign ended.”

“I should’ve hired help. I had initially contracted a virtual assistant, but the terms of her work dictated she couldn’t ‘write.’ That was useless for me because much of what needs to be done in Kickstarter is responding to and sending out e-mail messages and social media posts. I should’ve vetted other assistants earlier and set up a plan to use the help more effectively.”

Secure a Core Group of Contacts

“It might appear that I had a team working with me, but for the most part I ran the entire campaign solo. To be sure, a close friend helped me shoot the primary video, which I then edited myself. For the Kickstarter page, I reached out to a core group of my first-level contacts for feedback, recommendations and editing and proofreading. This was for not only the text on the page, but also for the video and the reward levels.

“Without the help of these friends and their critical eye and strong recommendations, I’m not sure the campaign would have been as successful. Also, by bringing in a core group of contacts early in the development process, project creators can bring a sense of ownership and connection to the project. This is important when it comes to reaching out to people once the campaign is launched.”

“The most effective activity for me was using LinkedIn Groups. There I could search and identify potential fans and ambassadors and contact them with my story. I wrote a strong letter that was designed to quickly create interest, establish credibility and ultimately ask for help. Remember, don’t be shy. The second most effective tactic for me was reaching out to bloggers. My project is very specialized yet appeals to a wide range of people. So I had a wide swath of potential bloggers to contact. Even though I had great publicity through these types of sites, I think I should have worked this part of my campaign earlier and harder.”

“I also learned how critical a good video is to the success of a campaign. Again, shorter is better. It doesn’t have to be professionally produced, but it does have to be clear and concise: Explain the project, why funds are needed, and ask for support. After several rounds of editing, my video timed at about three and a half minutes. Nearly 50 percent of those who watched the video watched the entire video; of those who watched the entire video more than 25 percent backed my project. Many backers and others went out of their way to express how much they enjoyed the video and how it motivated them. I do think that my ability to write and speak contributed to my success as I was able to communicate clearly and feel natural in front of a camera.” [Find an array of Allan Karl’s videos, including his initial Kickstarter video and his “rewards” and “stretch goals” videos, here.]

“For me, the fact that my project was nearly entirely realized [the book itself was compete] and my funding goal was set for a very specific purpose helped communicate that my project was real and not some lofty or experimental idea that had little chance of success as many projects on crowdfunding sites are.”

“There is no question that the ancillary adage, ‘garbage in, garbage out’ is also true. Project creators not only must invest money, but they must invest time and passion into the project. I watched more than a hundred Kickstarter videos and reviewed even more projects before starting mine. I was amazed at how many incredibly good and creative projects never achieved their goals. If there was one common element, I believe it was either the lack of passion or the apathy of the project creator was the likely cause. To be sure, if project creators don’t have the skills to edit video, create graphics, write and otherwise plan, I do think they must enlist and hire people who can support.”

“Look at other Kickstarter projects in your category, those that were successfully funded and those that failed. Write to the project creators through Kickstarter and ask them any questions you might have. It’s also possible to gain support from past project creators who still have the ability to communicate with their backers — their backers could be your backers, too. Also, be sure to start building a contact list very early, and don’t be afraid to ask for referrals and advice.

“Also, check out the Kickstarter support groups on LinkedIn and other crowdfunding sites that review projects and provide a forum for project creators. Once you launch your campaign, be sure to list it with www.kicktraq.com so you track progress and review analytics outside the Kickstarter dashboard.”

My Interview with Allan Karl

I’ve known Karl virtually for a long time both through adventure motorcycle travel and writing communities. I met him in person for the first time one evening during a travel writers tour of San Diego’s breweries, and afterwards, filmed this short video about his campaign and book.