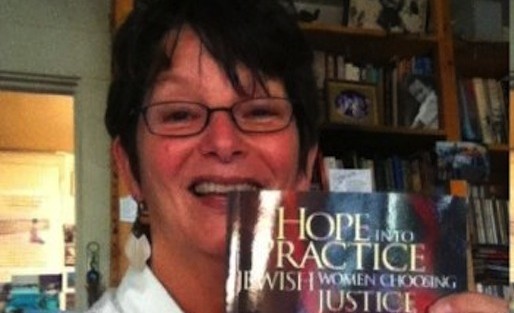 This crowdfunding author success story is part of our PBS MediaShift series on crowdfunding: 3 Successful Authors: 3 Successful Crowdfunding Platforms. This author crowdfunding segment interviews author Penny Rosenwasser who funded her book “Hope into Practice: Jewish Women Choosing Justice Despite Our Fears” using the Indiegogo platform. Also read about:
"I spent about a month in advance really thinking through the campaign, researching what others had done, writing, editing, rewriting, re-editing and preparing the script for the video." -Penny Rosenwasser
ADVERTISEMENT

Penny Rosenwasser is a self-described rabble-rouser for justice, activist, author of two previous books, a former performing folk musician, KPFA radio host/producer, women’s music networker, festival organizer and diversity workshop leader. Penny is former Jewish Caucus Chair of the National Women’s Studies Association and a founding board member of Jewish Voice for Peace. She teaches an Anti-Semitism/Anti-Arabism class with a Palestinian colleague at the City College of San Francisco. I caught up with her on the phone, and here are her words.

Why Indiegogo over Kickstarter and Pubslush?

“I chose Indiegogo because a friend had used it successfully and found it user-friendly. Also, as you may know, unlike Kickstarter, you can keep the money even if you don’t make your goal. I already felt so much pressure self-publishing that I knew I didn’t need any more pressure during the crowdfunding campaign. Also, the percentage felt fair to me. They charge more if you don’t make your goal and less if you do. All this made my campaign feel doable and made more sense for my own piece of mind. That said, I think that people who use Kickstarter can use that pressure positively.”

It’s All About the Community

“I reached half of my goal in two days and met my goal in eight days. Why? Because I’ve been a social justice activist for 40 years, and I have big national community and network who believe in what I do and people think I do it well. For my work with Jewish Voices for Peace I ask for money all the time, so it wasn’t hard for me. What you’re doing when you’re asking for money is giving people an opportunity to help make the world a better place.”

“I was amazed at the kinds of people who responded: my high-school English teacher, my hairdresser, ex-boyfriends, old girlfriends, a girl I went to Sunday school with and my dissertation advisor, as well as current friends and colleagues. People from everywhere in my life, including people who didn’t necessarily send a gift but shared generously with contacts. One friend from high school who played with the Dallas Cowboys became an author and he sent my stuff to the religion editor from the New York Times. I never heard from the editor but the fact that he did that was amazing to me. The process re-established contacts with people that I haven’t been in touch with for many years.”

It’s Who You Know

“I received $500 and $250 gifts from people who I don’t think could really afford it but wanted to support me. A childhood friend, and others, told me that they believe in what I do and really wanted to help. I was very moved by that. I did share the campaign on Facebook, and the people I know shared. But I knew every one of the 149 people who pledged, with the exception of two. I think if you don’t have a strong personal network, you would have to do a lot more social media. That said, I think people give money to people they know. I don’t know if I would give money to someone I didn’t know.”

“Indiegogo tells you in terms of setting your goal, think about the people you know and how much they can spend. I underestimated, clearly: 17 chose the $36 reward, 56 the $54 reward, 13 the $72, 14 the $108, 1 the $250 and 3 the $500. What’s interesting is that people didn’t necessarily send according to the perks, they sent $10 or $50 or whatever they wanted. Some people who sent the $108 perk said ‘don’t send two books just send one.’ Another said ‘don’t send any books, I want to buy it.’ Clearly people want to give for something they believe in. All you have to do is ask and tap into that.”

“I personally thanked every single person, not just a sentence, but with a personal note, and many would write me back and we’d have these long conversations. Some of these conversations led to people wanting to bring me on my book tour.”

“I spent about a month in advance really thinking through the campaign, researching what others had done, writing, editing, rewriting, re-editing and preparing the script for the video.

People are calling me to ask for advice now and I say, yes, absolutely go for it. But really put time into presenting it well. Do your homework. Again, just look at the campaigns, the different things they do, the rewards, what looks good, what doesn’t. It’s exciting. The different projects are amazing, really enjoyable to look through and inspiring.

I don’t think you necessarily have to have a cause-based pitch. Since my experience a friend has self-published her novel. As long as you’re presenting it in a way that shows what’s compelling about it, and if it’s a good story and you’re a beautiful writer I think it would work.”

“I know I pitched it well. I looked at many of the other Indiegogo campaigns to see what was compelling. But remember, I organize events, it’s part of my job, and I know promotion. Even so, I was very intimidated by needing to do the video. Indiegogo says you get 70 percent more money with video. So I hired a professional who I heard was great, wrote the script and did it. She only charged me half her normal rate and said if I didn’t make my goal she wouldn’t charge me the rest. She even borrowed a teleprompter.

What should have I done that I didn’t? Indiegogo tells you to do a lot of things that I didn’t do, but I did send an email once a week and a friend told me that was great timing and the tone was also perfect–self-confident but not intense or pressured. I posted on Facebook weekly, I posted pictures, and people shared.”

“If you can call a videographer and a friend who helped format the MailChimp newsletter a team, I guess I had a team! All in all it cost me less than $1,000. I think that for people who don’t have money you can also do trades and barters.”