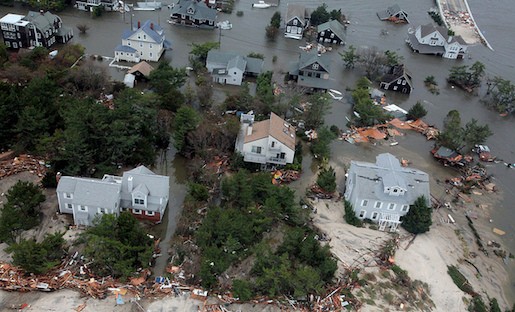 Aerial view of the New Jersey coast after Hurricane Sandy. Image from DVIDSHUB on Flickr. Licensed under Creative Commons.

For all the talk of journalism’s noble past and uncertain future, the truth is that journalism’s day-to-day is a lot like slinging hash. Everyday journalism is produced quickly, in massive quantities, in front of a live audience.

"In truth, we don’t really need an anniversary to 'remember' what happened last year on Oct. 29. Many reporters have never really been off the Sandy beat. "

So who can blame the busy news editor for wanting to create a special-of-the-day that can be prepared ahead of time? And hence one of the hardiest of journalism perennials, the news anniversary story: Sandy, a year later; 9/11, 12 years later; the 50-year anniversary of the JFK assassination.

A house on Jersey Shore in Hurricane Sandy aftermath. Image by b0jangles on Flickr. Licensed under Creative Commons.

The anniversary news story is so common and obvious that I wouldn’t have given it a second thought had I not sat in on a panel on the future of journalism recently and heard Naomi Starobin, news director of the Connecticut public radio station, WSHU, declare that her radio station will not use the word “anniversary” on Dec. 14, one year after the massacre in Newtown.

“We’re trying not to use the word ‘anniversary’ because it tends to be a celebration,” Starobin told me afterward. “And this, of course, isn’t.”

Not that the radio station closest to Newtown, Conn., will let the most gruesome school shooting in U.S. history go unremarked on its one-year mark. It is, as Starobin says, a good opportunity “to take stock” of how public discussions on gun control, mental health and school security have changed in the past year.

But Starobin is assiduously avoiding the A-word, and also following the lead of the town, which hopes to repel at least some press by deciding not to hold any public vigils that day. In fact, it is expected that some families of Newtown victims will visit Washington on Dec. 14, not just to discuss important policy implications of the event but to draw some press away from the grieving town.

Recently, we passed the one-year anniversary of Superstorm Sandy, and anniversary coverage was plentiful. And because anniversary coverage is such a staple, it is easy to predict exactly how it will go: hurricane footage covered by grave voiceovers, song-filled ceremonies from inside churches, before-and-after photo galleries, replays of Gov. Christie walking boardwalks and — yes — interactive maps.

But do the anniversary stories take stock? Or are they mostly be indulgent exercises in year-after rubbernecking? Or worse, simply follow the feel-good script laid out by the Christie administration in its “Stronger than the Storm” PR campaign?

The Star-Ledger ran an important opinion piece by editorial board member Julie O’Connor holding Christie to task for avoiding the issue of climate change — both in his rhetoric and in his rebuilding policy. It indeed takes stock, contrasting New Jersey’s reaction to the climate change issue to that of its neighbors.

“Here’s what we do know: Other states hit by Sandy, including New York, Delaware and Maryland, are rebuilding higher than we are. This means that when the next big storm sweeps through, New Jerseyans could get clobbered all over again — while watching our neighbors across the Hudson bounce back relatively quickly.”

Reporter Scott Gurian made the same point this weekend for WNYC.

The Record rolled out its anniversary coverage by taking stock of the rebuilding progress in Moonachie, N.J., a Bergen county town which, like Little Ferry, was heavily flooded when the storm overwhelmed a series of berms. The otherwise excellent video, unfortunately, was accompanied by pre-roll of a Christie campaign ad.

In truth, we don’t really need an anniversary to “remember” what happened last year on Oct. 29. Many reporters have never really been off the Sandy beat. Star-Ledger columnist Mark DiIonno has penned more than 30 columns on Sandy recovery just since March. The Record has been relentless in digging into NJ Transit’s $120 million mistake in parking its rail fleet in Hoboken and Kearny, N.J., during the storm. NJ Spotlight and New Jersey Public Radio share a reporter, Scott Gurian, who is working full-time on the Sandy beat, both for radio and print. Justin Auciello, of Jersey Shore Hurricane News, created the beat.

The challenge is not to remember what happened. The challenge, which is ongoing and which the New Jersey press corps well understands, is to continue following the money, the changing weather, the insurance companies, the businesses, the tourists and the governor.

The date itself, not so important.

Debbie Galant is director of the NJ News Commons, a project of the School of the Communication and Media at Montclair State University. It resides within the Center for Cooperative Media and is funded, in part, by contributions of the Geraldine R. Dodge Foundation.