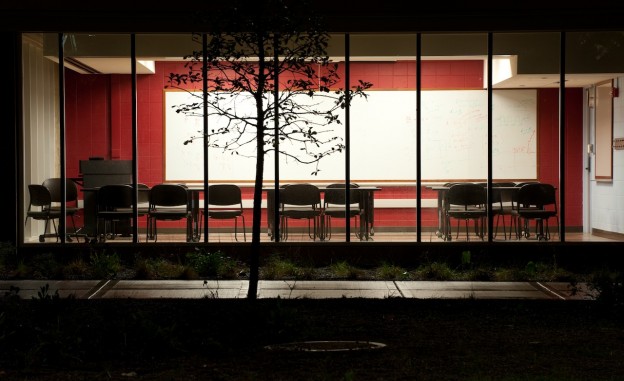 Digital disruption has changed the landscape of the media world, and journalism and communication schools need to figure out how to educate in a time of vast change. The schools themselves need to change too, or risk falling behind. As part of this week’s special “Back to J-School 2013,” in-depth report at MediaShift, this episode of the Mediatwits will talk to students and professors alike on the value of a journalism education, the future of education innovation and more. Special guests this week are Howard Finberg, creator of NewsU at the Poynter Institute; Eva Avenue, former editor-in-chief of the Daily Lobo at the University of New Mexico; and San Diego State University professor and Knight Center MOOC coordinator Amy Schmitz Weiss. MediaShift’s Mark Glaser hosts, along with Andrew Lih from American University.

"Journalism and communication schools need to figure out how to educate in a time of vast change."
ADVERTISEMENT

Howard Finberg has been in journalism for 40 years. His resume includes positions with the Chicago Tribune, The New York Times, the San Francisco Chronicle and The Arizona Republic. He was the presidential scholar at Poynter in 2002 and joined Poynter full-time in 2003 to create its e-learning project, News University. In 2012 he became the Institute’s director of partnerships and alliances. His Twitter account is @Hif.

Amy Schmitz Weiss is an associate professor in the School of Journalism and Media Studies at San Diego State University. Schmitz Weiss is a 2011 Dart Academic Fellow and has a Ph.D. in journalism from the University of Texas at Austin. She teaches journalism courses in basic writing and editing, multimedia, web design, data journalism and mobile journalism. She is also the 2011-2012 Recipient of the AEJMC Bridge Grant with funding from the John S. and James L. Knight Foundation that led to the creation of a mobile news app, AzteCast, for the San Diego State University campus population in spring 2012. She also is a former journalist who has been involved in new media for more than a decade. She has worked in business development, marketing analysis and account management for several Chicago Internet media firms. Her research interests include online journalism, media sociology, news production, multimedia journalism and international communication. Contact her at [email protected]

Eva Avenue, who was born in an attic in Amsterdam, works daily in the fields of art, music and journalism. She has written about everything ranging from local and national politics to personality features and Buddhist haikus for a large variety of newspapers, magazines and online publications. She is currently managing editor of Pyragraph.com (running first-hand stories, tips and advice from professional creatives and working artists), publisher of the Nightly Noodle Monthly, an art and world philosophy zine, and she just moved from New Orleans to New Mexico where she just got an internship at SITE Santa Fe, one of her favorite contemporary art spaces in America.

1. Do students need to go to journalism school to be journalists?

The very presence of J-schools in a journalist’s education are in question. A new survey from Poynter’s NewsU indicates that professors see their job as crucial to teaching student journalists skills and ethics needed to get a job. But professionals aren’t as sure, noting that many of their new hires have to learn on the job, especially as newsrooms continue to change and innovate. Some students, like special guest Eva Avenue, spurned J-school and instead pursued practical journalism education at a student newspaper or at an internship.

Are J-schools in danger of becoming extinct, as special guest Howard Finberg has suggested? What do they need to do to innovate and stay relevant?

If there’s any other industry that’s transforming besides journalism, it’s higher education. The growth of massive open online courses (MOOCs) seem to be all the rage, but leave professors and university administrations worried about students’ education and the bottom line. The Knight Center has already tried out teaching data visualization via a MOOC. Special guest Amy Schmitz Weiss runs a MOOC on popular data. Special guest Howard Finberg also sought to turn J-school education on its head by creating a shared Journalism 101 class, an online curriculum for journalism basics, but it failed when too many J-schools expressed apprehension for its place in the classroom.

Do online courses have a place in J-school? How should they be used? Will MOOCs or programs like NewsU’s Journalism 101 be the future of journalism training?

3. What skills should journalists learn in school today?

Professors have to decide as they head into the next semester and the next decade how to upgrade their syllabi to meet the journalism’s industry challenges and properly train their students.

What is the professor’s role in a j-school classroom? Should they be instructors, mentors, editors or publishers?

Why We Need Radical Change for Media Ethics, Not a Return to Basics, by Stephen Ward

A Multitude of Platforms Give Educators Tools to Showcase Student Work, by Susan Currie Sivek

Forcing Students to Step Outside Their Comfort Zone in Jerusalem, by Rachele Kanigel