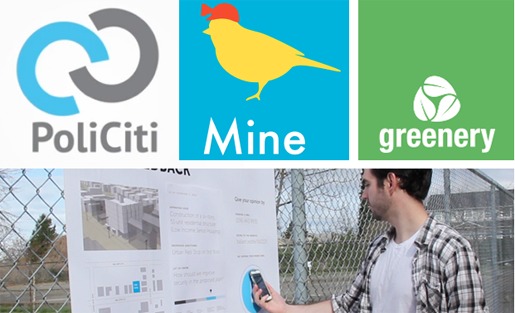 At the Microsoft Design Expo, students from eight universities spotlight design projects based on the theme of "making data useful."

How can we use data to improve our lives, our communities, and the world at large? At the recent Microsoft Design Expo, students from eight universities showcased design projects along the theme of “making data useful.”

"How can we use data to improve our lives, our communities, and the world at large?"

Note: since this is a design expo, many of these presentations are concept pieces or still in prototype stage. To see all the projects, including an amazing animated digital performance on the surface of the Walt Disney Center in L.A., see the full list of inspired designs on the Fuse Labs blog.

Mine: see & control what data-miners see about you

How are companies using our data? The students tell us the story of Sharon, a 31-year-old woman who’s looking for a house. How will data about her influence her credit rating and insurance rates? Whenever she goes to the pub, she posts it to Foursquare. Whenever she tweets about spending, her banks make a note of it.

Companies are making money from Sharon’s data; how can she understand what data they’re collecting and take control of that data?

To understand the judgments that people make about others online, students did interviews in person and with Mechanical Turkers, showing Turkers photos from social media and asking them to make judgments about other people. In one case, people were shown two images, a “regular” looking guy and a guy posing with a bunny. “Who would you share data with?” they asked. In another study, they found that respondents would be more likely to lend their phone to a drunk woman than a serious-looking one.

These surveys inspired Mine, “a service that allows you to see yourself like data-miners see you.”

To use Mine, first give it access to your social media accounts. When it tells you what a system might guess about your character from your data, Mine gives you a chance to choose what to highlight and hide.

One of the attendees asked: At what point does data privacy become an arms race between data collection and data privacy? Answer: If we educate the public about data mining, then maybe we can come up with arrangements where people take more control of their data, which may include having them sell their data.

[Note: Mine is a very sophisticated version of what Mike Ananny calls “folk theories” of algorithms. It doesn’t necessarily reveal what data miners are actually doing, but it does illustrate what might be done.]

Seedlinks is a system by Brynn Flynn, Jiwon Paik, et al, at Carnegie Mellon University. The design on this project is gorgeous.

Seedlinks is a system that uses data to help people who care contribute to their local communities. It’s aimed at meeting needs, building knowledge, and cultivating relationships, pushing people into their local communities to collaborate and foster positive social change. The focus of the project is in empowering non-expert participants who are not already leading projects to be more involved in projects in their communities. Seedlinks takes input from public data, personal Facebook data, and data internal to the Seedlinks system. The site also offers members the possibility to contribute in a variety of ways: online and with actions. Each member also has a dashboard to track their actions over time, and their connections to their community.

Getting people to work together for the common good is tough. Seedlinks focuses on this in three ways:

An attendee asked: This project draws people’s attention to issues — is your view of humans that they need to be “paid” with money or other things? The team argued that giving feedback is the key, rather than giving rewards.

City officials cannot hear the voices of many people, yet the government makes decisions based on the few voices that reach them.

What if anyone could use social media to reach city planners and work together with communities to create a better city? CommunitySlate sets out to create accessibility between the public and city planners.

Public opposition to planning can be costly; the designers are hoping that if the city relates more directly to the public, that costs can be reduced.

An attendee asked: What are the difficult aspects of getting information out there, and where is there resistance to something like this working?

Answer: Sites like forums don’t take into account the models that are used by planners. Designers need to use processes that make sense with the way that government works. Likewise, governments’ outreach plans aren’t especially well-suited to people’s needs or availability. The city will usually want specific feedback at certain phases.

[Note: Another company in a similar space is Courbanize, that recently completed the TechStars startup accelerator program.]

(Policiti is by Akshan Ish and Shreya Chakravarty at the Indian National Institute of Design. It was advised by Rupeshkumar Ishwarlal Vyas and Dr. Bibhudutta Baral. Microsoft Liaisons were Deepak Menon, Nithin Ismail, and Surya Vanka.)

Crime is increasing in India, and sometimes, it seems as if the police don’t care about citizens. Citizens have very little trust in the policing system.

To start, the designers interviewed citizens, who told them stories about harrowing experiences with the police. They also interviewed police to find out the pressures that police face. In response, they created a video that explains the current context in which police operate:

The video shows citizen having trouble interacting with police officers due to language, educational, and bureaucratic barriers. Citizens usually don’t have information about jurisdiction, timely information, who/what/where, and they’re unable to share stories among each other.

Policiti helps people navigate the interaction with police. It tells people where the closest police officer is and helps them report incidents. It also helps people go to the police together in groups, which is more reassuring.

The multilingual site also collates data on the record of a particular police station. The data collected on it helps citizens and police make decisions, but most importantly it helps people reflect on their reality, seeing how many staff, how many arrests, and how many closed/open cases a particular station has.

A panelist asked: What is to prevent people from abusing it, e.g., if they have a grudge against the police?

The team acknowledged that’s possible, but they think that this app could move beyond a contestational relationship with the police. I’m less sure about an app that tracks the location of people submitting police reports.

Another panelist wondered if we really need an app for this, or responses to corruption that are more broad? The team responded: It is actually a multi-platform process; a mobile app is one aspect of it. Apps help make it more personal. (They are also considering using this as an app for public police kiosks.)

Greenery is by a large group of students from Universidad Iberoamericana in Mexico City, advised by Jorge Meza Aguilar and Lachlan Steward. Microsoft Liaisons were Tobias Kinnebrew, Andres Monroy Hernandez, and Don Coyner.

Greenery promotes a reconnection with nature through technology, helping users learn how to grow their own food. It is not just about growing veggies — it’s about a full immersive experience.

Greenery has the following components:

A video shows an advanced user interacting with Greenery who is spreading the knowledge and passion about urban gardening with his friends.

Panelist Bill Buxton commented that in World War I, there was a movement called “Victory Gardens.” There was an external social force to make that happen. The question is how to use social media as a catalyst. (It is not a crazy idea!) The challenge is how to get people started in a world of instant gratification. The team replied that their user studies show that people who are motivated to grow their own food often don’t even know how to do it.

Other Projects at the Design Expo

Here’s a roundup of other posts about the Microsoft Design Expo this year:

One response to “5 Civic Projects Aim to Make Data Useful”