How Near-Universal Adoption of Mobile Phones Is Changing African Media 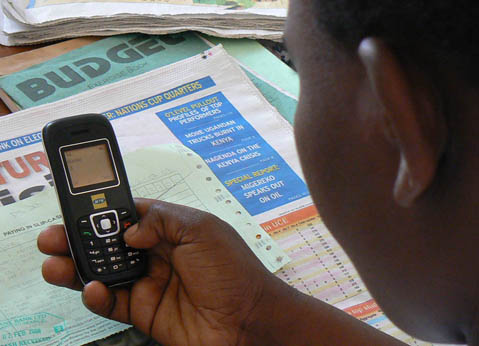 The growing prevalence of mobile access in Africa is opening up opportunities for new media programs and watchdog operations. "Image courtesy of kiwanja.net":www.kiwanja.net/mobilegallery.htm

In the slums of Nairobi, many people say they are willing to skip a meal to afford a mobile phone.

“A mobile phone helps them to optimize their lives in the long term through better access to information and resources, including food,” said Gabrielle Gauthey, executive vice president of global telecommunications company Alcatel Lucent. “Access to information has become as vital as water and electricity.”

A mobile phone helps them to optimize their lives in the long term through better access to information and resources, including food." -Gabrielle Gauthey

That need for information, coupled with Africa’s rapid urbanization, is driving dramatic changes in the way people share and consume information in Africa, according to a new report from the Center for International Media Assistance, which quoted Gauthey.

Guy Berger, UNESCO’s director in the Freedom of Expression and Media Development Division and leader of the South African National Editors Forum, predicted that mobile devices will surpass broadcast receivers as the continent’s primary medium.

The shift from radio and television to mobile phones and other wireless devices is creating new challenges and opportunities for media outlets. Traditional international broadcasters — such as Voice of America, BBC, Al Jazeera, China’s CCTV and South Africa’s SABC — are launching new services with entirely different programming. VOA launched a new journalism program in Africa, with 100 trained citizen journalists filing reports from the Congo and creating new centers of conversation on social media sites.

“We are approaching people in an entirely different way,” said Gwendolyn F. Dillard, director of VOA’s Africa Division. The old way in Africa was communal. “People defined themselves in groups so you broadcast to groups.” Now, she said, Africans increasingly define themselves as individuals. So you broadcast to an individual “with a mobile device in a pocket or handbag.”

The growth in mobile has created new opportunities for independent media, as well, including new providers of news, information, education, health care and entertainment. It also creates new ways for citizens to monitor and petition their governments, and for governments to reach citizens.

A few examples highlighted in the report:

This piece was written as a joint effort of the International Journalists’ Network staff.