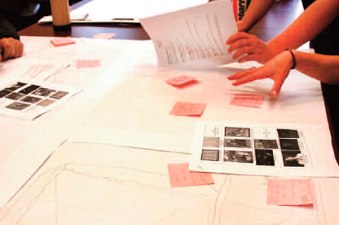 When college students get a syllabus on the first day of class, they expect it to lay out exactly what will happen during the course: its goals, tasks and deadlines. Finding that they’re expected to deal with “flexibility,” “adaptability,” “rapid change,” and “making mistakes” might be unnerving.

However, those are likely to be the characteristics of innovative journalism classes that teach new forms of storytelling. At the AEJMC conference this summer, Google News head Richard Gingras called for journalism educators to think beyond today’s standard news site architecture and story structures and to teach journalism students the tools of computer science and product design.

"We could learn from each other. I didn't know anything about taping an interview or editing audio or video....It made telling the story easier because we had all these points of view." -Codi Yeager
ADVERTISEMENT
Click here to read the whole series

But it’s clear: Some journalism faculty are already there.

Dana Coester and Joel Beeson, both professors at the Perley Isaac Reed School of Journalism at West Virginia University, collaborate on teaching a multimedia reporting course with a syllabus that includes the terms above. Their course project, “Envisioning Race,” started in Spring 2011 and has continued over three semesters. The project challenges students not only to deeply address local issues of race and class, but also to design from the ground up an entirely new way for the audience to interact with their stories.

A standard multimedia journalism course might ask students to develop a multimedia package or to contribute to a larger class project on a specific theme. Coester and Beeson, though, have gone well beyond that approach. Their course project focused on the African-American experience in McDowell County, W. Va. They knew the stories that emerged from the community wouldn’t be represented fully with the usual storytelling strategies.

“It turns out database narrative, where you can have lots of content that shifts in the way the story does, will do [the story] more justice and will be more authentic and more immersive,” Coester said.

Dealing with the unfamiliar nature of database narratives — in which tags classify themes and types of content — was a challenge for students, especially as they tried both to imagine this new form of storytelling and to cope with the clerical aspects of managing the content they’d generated.

Each student team had to contribute at least 20 pieces of content, which could take many forms: a map, text, a photograph, census data, or anything relevant to the larger topic. Students then had to articulate the relationships among the pieces of content, and assign each item metadata to connect it to others along thematic lines or to categorize it by format. The metadata and the relationships they established would control how the content appeared for the user during interaction with the interface.

“We had gobs and gobs of content. In order to do database narrative, you need lots of content in order to organize it lots of different ways,” Coester explained. “We want the user to be able to construct a narrative about race in West Virginia that’s dynamic and changing. They can sort by external mass media perceptions. They can sort it by historical data about population changes over a century in African-American communities,” among other themes.

The students then developed storyboards that demonstrated how users of a touch table or another touch interface, like a tablet, could navigate through the tagged content. Users can take unique, nonlinear and non-chronological paths through the content.

The critical difference in this form of storytelling is that the narrative arc of the story has not been predetermined by the journalists. Instead, the user’s interaction with the content determines the story that emerges. There are even opportunities for integrating user-generated content.

“The interface is the narrative. The narrative happens when you set up those relationships between the data, and even allow users to add to that,” Coester said.

“You’re almost an archeologist, taking these shards and these little fragments of things…If you have enough of those pieces, it starts to build that narrative, and you realize there isn’t just one story,” Beeson added. “You start seeing the contradictions and the complications, and how a lot of these stories have been hidden.”

The journalism students’ work has already been transformed into a touch-table interface by computer science students who were also part of the project, and who used the storyboards as a basis for coding. A project website in HTML5 and an iPad app are both forthcoming.

To make the project happen in all of these formats, students from a variety of backgrounds had to work together.

“We could learn from each other. I didn’t know anything about taping an interview or editing audio or video. I got to do that and…to see how it all fit together,” said Codi Yeager, a visual journalism major in the class, who graduated in May and is now working as a reporter in Alabama. “It made telling the story easier because we had all these points of view.”

Storytelling in Space and Time

Beeson and Coester have few precedents in journalism to demonstrate to students as examples of experimentation. They often turn to the work of artists who use technology in creative ways to inspire their students.

“We refer to almost nothing in journalism when we do these projects. I think it’s better when we’re asking students to invent,” Coester said.

Instead, among other activities, students took a field trip to the Holocaust Museum in Washington, D.C., to experience its exhibits and immersive environment. In class, they handled actual physical artifacts from the stories they wanted to represent.

“The physical space metaphors were an anchor for the whole class,” Coester said. “We used Apple’s user interface guidelines as a text [for the class]. We kept trying to put structures in place, and there just weren’t any to pull from.”

Students maintained inventory sheets to track the content they had collected.

The student-designed interface provides what Coester calls a “take me” experience for the user — a “loosely choreographed,” dynamic interaction with elements of a narrative. It differs from what she calls the “go to” experience of the web in which users skip from site to site, she said, in that there is at least some structure for the content. Crafting that loose choreography, though, is quite different from the kinds of storytelling students are accustomed to doing in earlier classes.

“Even after being in [the class] for a little while, I still didn’t have a very good idea of what it was about,” Yaeger said. “It was a way different kind of reporting than anything I’d done in my other classes. It was a steep learning curve.”

The new concepts didn’t really sink in until the students had to visualize the entire project and its ultimate shape.

“[Students] don’t understand how to do their reporting until they’re sitting there trying to assemble the story. They don’t know what they need until they’re at the production state. You’ve got to get them to storyboarding quickly … That’s when all the light bulbs go off,” Coester said.

There are some familiar aspects from their other journalism courses, of course.

“There is nothing about what we’re doing that’s not very rigorous about the reporting, fact-checking, and verifying sources,” Coester said. “It’s just thinking about the narrative in different ways.”

Coester and Beeson developed the class with a strong service-learning component. Covering real people in a real community raised the stakes for the students and made them more committed to their work.

“They fall in love with the community, and it becomes their own story,” Coester said. Even the commute for their reporting trips helped the class bond. “They come back from the five-hour van ride and have become a team,” Beeson said.

Journalism students drew out storyboards and plans that computer science students then developed.

The students’ sense of ownership helped motivate them to make the difficult mental shift into this new form of storytelling. They had come a long way from the familiar inverted pyramid, and now learned terms like “four-dimensional storytelling” and “holographic narrative.” One student coined the term “quantum journalism” to describe the difficult-to-capture nature of the group’s narrative.

“I was surprised at how naïve the digital natives are because they actually do use [technology] as a tool, but you have to reteach them the significance of what they’re doing,” Coester said. Even using Facebook takes on a new meaning for these students as they rethink the intersection of technology and narratives. “They don’t understand they’re publishing until you point that out.”

Coester said that the students in their program who are doing “the most experimental work” are most readily finding jobs. She and Beeson are working to encourage this kind of creativity among all their students. Beeson warns his classes, “If you’re here to take a test, then leave. But if you’re here to experiment …”

The students’ reaction revealed how daunting — and liberating — experimentation with storytelling could be.

“We had to realize that we couldn’t wait around for people to tell us exactly what to do or to have a particular formula for telling the story. We had to embrace the whole creative process and bring our ideas to what we wanted the project to be,” student Yaeger said. “There’s no set way to do it. We can pioneer different ways of telling the story.”

It’s a new role for both the students and their faculty, who have to create a framework for the students’ experience in the course, but then step back and allow the students to experiment and possibly fail.

“We want to indoctrinate the students into the idea, ‘This isn’t going to be your grandfather’s journalism,’” Coester said. “We’re telling students, ‘You invent it. We’re going to facilitate it.’”