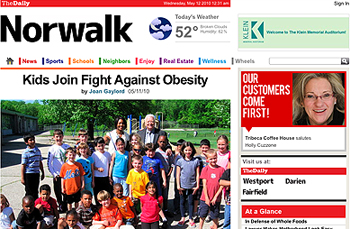 The Daily Norwalk is the flagship site for Main Street Connect

Local advertising is back in style, at least among some big national media companies, and that attitude shift has fueled changes for hyper-local and micro-local news sites.

While small independents might not yet feel the financial benefits of an increased focus on local advertising, some site owners are seeing increased interest in the content they generate and in the tools they need. Service providers have stepped in, willing to help them for a fee or ad percentage. New tools and networks for inexpensive local advertising continue to sprout, offering the possibility of payouts that will help fuel local news.

New tools and networks for inexpensive local ads continue to sprout, offering the possibility of payouts to fuel local news."

Some national players like AOL’s Patch have generated attention from traditional media like the Washington Post and the Los Angeles Times, and companies have popped up to provide technical services or partnerships. As always, paidContent offers strong coverage of large business moves.

Meanwhile, Michele McLellan of the Reynolds Journalism Institute has been compiling Michele’s List, which categorizes and surveys new local news providers. Along the way, she and her fellow researchers have helped build a new vocabulary defining online local news providers.

“We’ve come up with broad categories of sites that relate to their mission, their size and reach and their potential revenue needs,” she said via email. “The smaller community, micro-local and niche sites see local advertising as their main source of income. Larger sites, the ones I call ‘new traditionals’ often lean more toward testing a membership model.”

With the pace of change, it’s valuable occasionally just to take a snapshot of current trends. So here’s a picture of local news service providers and new networkers.

Instivate, which runs Neighborlogs of Seattle, continues to add customers and build out its Seattle Indie Advertising Network. The network includes at least 10 neighborhood sites and eight citywide sites, including the year-old Seattle Post Globe, born from some laid-off staff of the Seattle Post-Intelligencer. Instivate has also built a free iPhone app for Seattle crime.

Main Street Connect is offering community journalists the technical support, working capital and guidance to build and maintain community sites with franchise agreements. It calls itself a national community news company. The company’s current goal is to expand to 50 sites by the end of the year, said Carll Tucker, editor and publisher, in a telephone interview.

The company’s first site is the Daily Norwalk in Connecticut.

The Norwalk site is networked with sites in Westport, Darien and Fairfield, Conn.

TBD.com, the Albritton-owned local online site in Washington, D.C., has announced its first blog partner, ARLnow.com. TBD is scheduled to launch in the summer, and has made key hires in social media.

“We want to provide our users with content that’s relevant to them, so we are hoping to build a network of bloggers throughout the metro area, covering individual communities as well as topics of interest across the metro area, such as weather, transportation, entertainment and sports,” said Steve Buttry, director of community engagement, in an email. The Washington Post has also been building its relationships with local bloggers.

Two McClatchy papers have put networking into high gear. The Sacramento Bee has launched Sacramento Connect, a network of local and niche bloggers and sites, with a Twitter account pushing out featured stories. The Miami Herald has also been building a network with local sites, some financed by non-profit money. McClatchy follows companies like Hearst, which has long had a Neighborhoods section at Chron.com, with sites that use innovative advertising tools like PaperG’s Flyerboard.

(Disclosure: I work for the McClatchy-owned Charlotte Observer.)

TheDigitel.com, a local news site with human aggregation from Charleston, S.C., plans to expand to Charlotte soon. Ken Hawkins, founder and editor, says the site is using funds from an earlier investment by Palmetto Investments to add a couple of dedicated people in Charlotte, with technical support in Charleston. The planned revenue streams are topical websites and website development, he said.

Addiply, based in the United Kingdom, has built a tool that allows advertisers to bid for and buy ads across a network of local, independent sites. Publishers get 90 percent of the proceeds, and the tool is billed as an alternative to Google Ads.

Addiply is not the only provider of self-serve ads or ad networks for independent local news sites. While many small sites are building their own ads individually and trying various ad server solutions, new, simple online ad tools are proliferating.

It’s unclear whether the era of face-to-face ad sales is ending, or whether that space is a hole in the ecosystem yet to be filled.

BlogAds, a pioneering blog ad network out of Carrboro, N.C., is offering a BlogAds advertising deal encouraging bloggers to sell ads on other sites in their vertical, or “hive,” for a larger percentage of revenue. The ad network sells to a host of established independent sites, including PerezHilton.com and political blogs on the left and right.

Though many people are focused on AOL’s Patch, DataSphere out of Bellevue, Wash., has been expanding partnerships with traditional television companies to enable local advertising, fueling a need for local content. Raycom Media, based in Montgomery, Ala., joins Fisher Communications in partnering with DataSphere to provide self-serve ads to micro-local websites.

In Charlotte, the Raycom partnership plays out at WBTV with focused web pages for neighborhoods, requests for user-generated content, and with local stories generated and linked on social media with prominent datelines. RSS feeds for neighborhoods are available too.

In the Northwest, the moves of DataSphere and Fisher Communications have not been welcomed by independent news sites.

The renewed focus of so many big companies on local advertising could be viewed as heartening, signaling a need for local content to be packaged with local ads. But the advertising puzzle for many local sites still remains a challenge.

“I think there’s confusion among smaller site operators about how to best pursue advertising revenue,” McLellan said. “Some have made a success of it but others are journalists just figuring out the business side.”

She said plans are forming to connect online community publishers around revenue and business issues in September in Chicago. She and Jay Rosen, who teaches journalism at New York University, are organizing Block by Block: Community News Summit 2010, Sept. 23 to Sept. 25. Reynolds Journalism Institute and Knight Digital Media Center are among the sponsors.

“We’re inviting dozens of online publishers to share what they know and learn from others,” she said.

Andria Krewson is editor for two community sections of the McClatchy-owned Charlotte Observer in Charlotte, N.C. She is @underoak on Twitter.