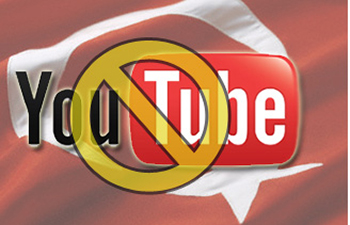 The Turkish courts banned YouTube in May 2008, and now a new protest campaign launched by the editorial team of the Milliyet newspaper is drawing attention to how long the country has been prevented from using the website.

The initiative, which was was launched on February 19, is not the first campaign of this type. But it’s notable because previous protests came from the blogosphere and, as a result, did not receive international coverage. The current ban is the fourth such action by the Turkish courts since 2007; hopefully, this campaign will draw attention to this policy of censorship.

There is nothing European, let alone cultural, about prohibiting citizens from viewing YouTube." - David Keyes

The editors of Milliyet were inspired to act by a February 16 piece in the Wall Street Journal by David Keyes, a founding member of Cyberdissidents.org. Keyes wrote that “there is nothing European, let alone cultural, about prohibiting citizens from viewing YouTube. Turkey’s status as the 2010 European ‘Capital of Culture’ should be suspended until this ban is repealed.”

The article received significant pick-up in the Turkish press. A columnist at Haberturk, a national daily, commented that the ban and the resulting situation were an embarrassment. The ban of YouTube was issued on May 5, 2008, by three Ankara magistrate courts who ruled that YouTube had not acquired a certificate of authorization to operate in the country. The columnist at Haberturk wrote that the minister of transportation should do everything in his power to change the relevant law, and then ask YouTube to pay taxes.

Everybody has changed their DNS settings and can access YouTube, just like the Prime Minister does and has said he does. This is why people have become insensitive about this ban. But YouTube is still blocked in Turkey and this affects Turkey’s image negatively and this issue needs to be resolved. So as the editorial team of Milliyet Cadde, we agreed to show everyday how many days have passed since the ban.

Following that, on February 17, technology journalists at the daily newspaper Hürriyet published their view on Internet Freedom in Turkey:

We as Turkish technology journalists have stressed the importance of a free Internet over and over again. Hürriyet Daily News & Economic Review did a remarkable job by documenting non-censored computers for the use of the IMF and World Bank delegations during their summit this summer. We said it was not a clever move to try to hide something you are ashamed of, especially if the rest of the world knows about it. The fact that Iran is on the same level as Turkey in terms of free Internet is a shame on the politicians of a free, democratic society. Just as Iran, Turkey would like to create a national search engine and a national Internet, which is an oxymoron to many.

In Turkey, law No. 5651, “On the fight against online crime,” allows a prosecutor to ban access to any website that incites suicide, pedophilia or drug use, or that defames Kemal Atatürk. During 2008, ten web sites, including YouTube, Dailymotion and Google Groups, were blocked by court decisions. Clearly, this law is being applied indiscriminately and as a tool to suppress free speech.

“In its current form, Law 5651, commonly known as the Internet Law of Turkey, not only limits freedom of expression, but severely restricts citizens’ right to access information,” said Milos Haraszti, media freedom monitor for the Organization for Security and Cooperation in Europe (OSCE), in a January Reuters story.

He said that Turkey, a European Union candidate, was blocking access to 3,700 Internet sites because Ankara’s Internet law was “too broad and too subject to political interests.”

Turkish newspapers also reported that in April 2009 the army sorted 292 Turkish-language websites and 138 foreign-language sites into categories such as “separatist,” “in favour of the EU,” “Islamist.” The list included a number of human rights websites, as well as newspapers such as The Independent and the New York Times.

The question now is whether Turkey’s online censorship will land it on the list of “Internet Enemies” that we at Reporters Without Borders will publish this Friday — and how its Internet policies will impact its EU membership.