Why Youth Media Projects Should Link Up with Public Media 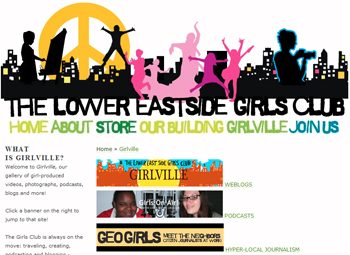 “The issues that we tackle in our ﬁlms are very powerful,” said youth filmmaker Lenah Perez in a newsletter from the New York-based youth media organization, Global Action Project. “I should say the way we tackle the issues is powerful, the issues are important — to look at the world as the big picture and to ﬁght for this world.”

As Perez’s quote suggests, there is often tremendous overlap between youth media and Public Media 2.0 projects. While we describe public media’s core function as “generating publics around problems,” youth media projects often accomplish the same goal by addressing issues such as social justice, civic engagement, and media reform. But, too often, these sectors are not linked. Is this a missed opportunity?

[Youth media] is in need of a centralized distribution hub in order to create the kind of awareness that makes adults sit up and listen."

There are over 100 youth media organizations in the United States, and they have a diverse range of priorities. According to the State of the Youth Media Field, a report written by Ingrid Hu Dahl, editor-in-chief of Youth Media Reporter and program officer of youth media at the Academy for Educational Development:

Youth media neighbors other fields — including youth development, media arts, and public interest journalism — and has looser ties with civic engagement, youth organizing/activism, and service-learning. But youth media is distinct in that it uses media as a tool and strategy for young people to examine themselves, their communities, and the world at large. One of the greatest qualities of youth media is its potential to reach large audiences while offering young people a thoughtful, mediated process.

Below are just a few of the many powerful youth media projects that span different platforms with varied goals and approaches, including journalism, career training, and social justice activism. They are participatory, grassroots efforts that take full advantage of Public Media 2.0 tools in order to generate the kind of engagement that spurs community development and social change.

Additionally, their Global Voices program links youth producers with regional organizations in order to produce and screen videos all around the world. With the help of partner organizations, Global Action Project’s productions are screened for over 250,000 people per year. Films are for sale on their website, and many are also available on Global Action Project’s YouTube Channel. Below is “What’s Justice?” a video about how the Youth Leadership Project of CAAAV (also known as also known as Committee Against Anti-Asian Violence) is organizing for justice and community healing in the Bronx:

While youth are often at an advantage in terms of social media fluency and knowledge of contemporary culture, the youth media field faces major challenges in supporting training, production and distribution, especially for resource-intensive broadcast platforms. Perhaps the most pressing issue is funding. According to the State of the Youth Media Field report:

Veteran funders are making fewer and smaller grants, and new funders are not inclining toward the kind of small, youth development-oriented organizations that populate the youth media field. Despite this funding landscape, youth media organizations and their funding partners acknowledge that the field has great potential to address large issues like poverty, education, war/conflict resolution, and HIV/AIDs. Funders in these areas tend to make long-term investments with short-term deliverables — a combination that would seem perfect for youth media, which routinely produces short, powerful, convincing, provocative, and extremely innovative pieces that have the potential to change society.

Along with difficulties in securing funding, practitioners in the youth media field sometimes struggle to uphold production values that match professionally produced media. While a particular youth media production may tell a great story that has the potential to ignite social change, many people will disregard it based on production values alone. Additionally, youth producers are not always taken seriously, or seen as even remotely authoritative. And in some school-based youth media programs, students can find their freedom of speech restricted.

According to Christine Newkirk of Youth Media Reporter, as a culture we are especially uninterested in the opinions and concerns of socially marginalized young people: “We see young people as consumers. We want their engagement in terms of buying things from us, but not in terms of listening to what they have to say.”

Another issue facing the youth media field is visibility. There are hundreds of youth media organizations in the United States and abroad, but individual projects are often grassroots and local, and lack access to widespread distribution. The field is in need of a centralized distribution hub in order to create the kind of awareness that makes adults sit up and listen. For example, Youth Radio has had great success in broadcasting youth-produced pieces on national media outlets. The potential for public engagement and social change increases exponentially when the audience is widened. Newkirk noted that exposure to youth productions can lead adults to develop “a newfound respect for youth citizenship and participation.”

Katie Donnelly is a research fellow at the Center for Social Media at American University where she blogs about the future of public media. With a background in media literacy education, Katie previously worked as a Research Associate at Temple University’s Media Education Lab in Philadelphia. When she’s not researching media, Katie spends her time working in the environmental field and blogging about food.