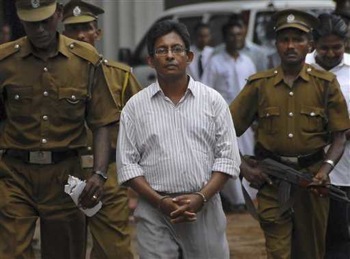 As of December 10, J.S. Tissainayagam, a respected Tamil journalist and editor, had served the first 100 days of a 20-year sentence in a Sri Lankan jail. In his World Press Freedom Day statement, President Obama cited Tissainayagam as an “emblematic example” of a journalist who was being persecuted. Amnesty International also named Tissainayagam a prisoner of conscience, and held a vigil for him in the U.K. in early September.

It seems that his only act of terrorism was his writing -- a dangerous precedent."

Yet the hopes for Tissainayagam’s release grow dimmer by the day. His case is attracting attention — and outcry — because it is the first known instance in the democratic world of a journalist being charged under the provisions of an anti-terror law.

Writing as an Act of Terrorism

J.S. Tissainayagam wrote for the North Eastern Monthly Magazine and the Sunday Times in Sri Lanka, and is the founder of the website Outreachsl.com. He was arrested on March 7, 2008 and held without charges for six months. On August 25, 2008, he was indicted under the Prevention of Terrorism Act on three counts.

The Judicial process lasted a further 12 months and on August 31, 2009, Tissainayagam was found guilty on all three counts. He was sentenced to 20 years of “rigorous imprisonment.” The National Post of Canada wrote an editorial defending Tissainayagam and calling for his release. This is how the Post explained the Sri Lankan government’s case against him:

While he is accused of having taken money from the outlawed (and brutal) Tamil Tigers to operate a website providing the Tamil version of facts about the civil war, Mr. Tissainayagam’s main crime seems to have been writing two articles in the now-defunct Northeastern Monthly magazine in 2006 and 2007 criticizing the Sri Lankan persecution of the Tamils, who were seeking an independent homeland in the north-east corner of the island nation.

Mr. Tissainayagam criticized wartime tactics employed by Sri Lankan leaders, including the alleged withholding of food, medicine and other essential items from Tamil areas as a way to strike back at the Tigers. He also complained that the Sri Lankan army was conducting extrajudicial executions — murdering civilian Tamils as a warning to the Tigers that Colombo was not to be messed with and a caution to ordinary Tamils not to abet the Tigers.

Inside of Sri Lanka, state media are providing biased accounts of the situation. This isn’t surprising, as the president controls the state media and uses them to campaign against the opposition. This is putting other Sri Lankan journalists in danger.

During the opposition United National Party’s convention in Colombo on December 5, seven journalists working for state TV stations Rupavahini and ITN were slightly injured and their equipment was damaged when they were manhandled outside the location of the meeting. UNP leader Ravi Karunanayake said his party was not involved in the violence, and confirmed that the journalists had not been invited to the meeting. It is still not known who was responsible for this act. Meanwhile, in November, the three main Tamil dailies in Jaffna received threatening letters accusing them of playing into the hands of “terrorists.”

On the eve of the commemoration of International Human Rights Day on December 10, Secretary of State Hillary Clinton stated that “the Obama Administration is dedicated to upholding the tenets of the Universal Declaration at home and championing them abroad through a policy of principled engagement.” This policy must be followed in Sri Lanka.

In Sri Lanka, there will be no post-war reconciliation if a Tamil intellectual such as Tissainayagam can be found guilty of such baseless charges. Tamil journalists, human rights activists, politicians and other groups will naturally feel at risk if they too can be jailed at any time for 20 years. Clearly, the use of the anti-terrorist act in this instance is an attempt to intimidate government critics.

The United States must include Tissainayagam’s release as a benchmark for the restoration of the rule of law in Sri Lanka. Without press freedom and freedom of expression, the country will never be united, peaceful and on the right track for economic development and good governance.

Another Journalist in Danger

Tissainayagam is far from the only journalist suffering in Sri Lanka. Below is a video interview with Frederica Jansz, the new editor-in-chief and news editor of the independent Sri Lankan weekly, The Sunday Leader. She received death threats 10 months after Lasantha Wickrematunge, her predecessor, was murdered. No real investigation has been made regarding his case: