The Most Engaging Stories of 2016, According to Chartbeat 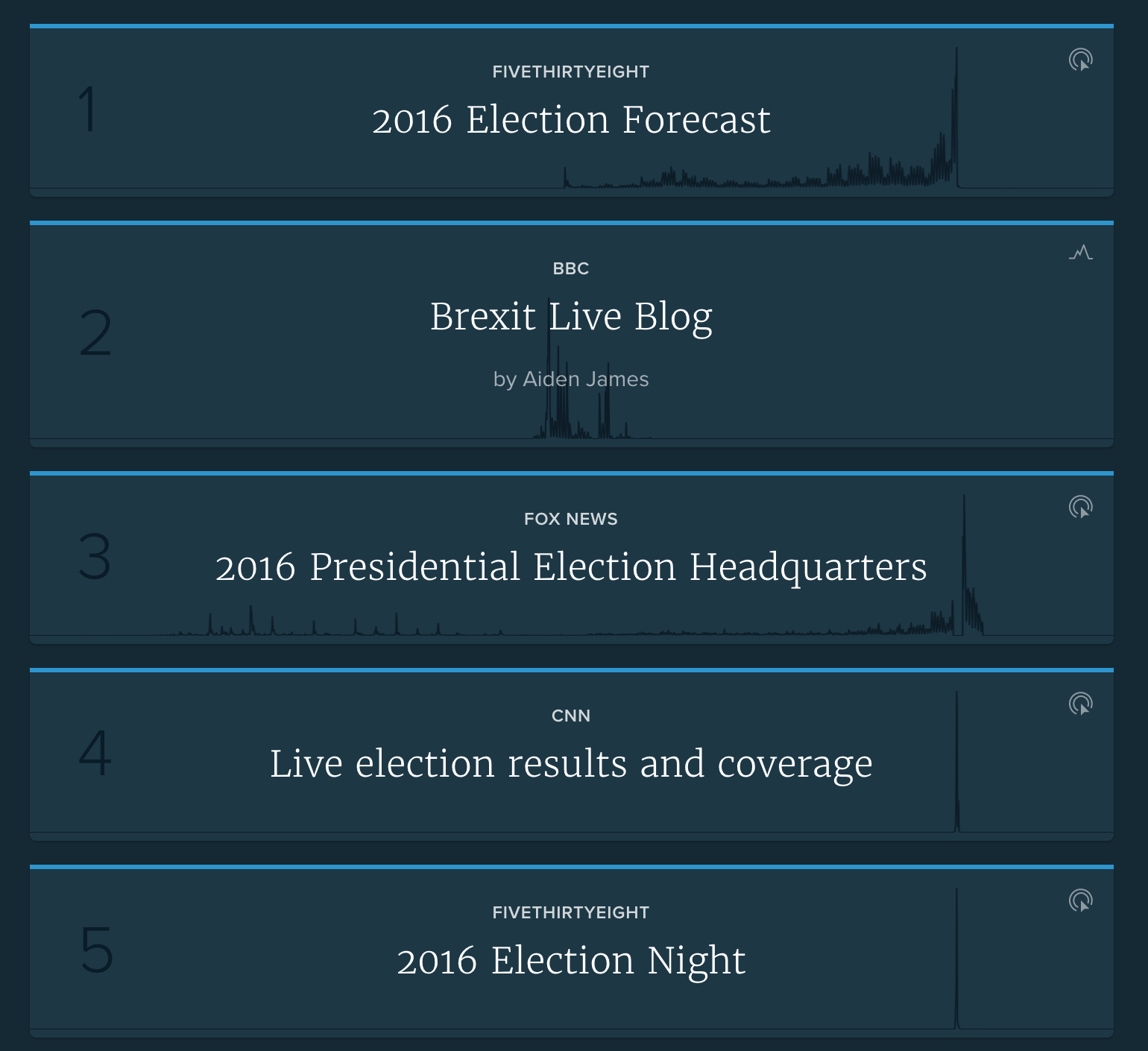 How do you measure a year in news? 2016 brought political earthquakes in the U.S. and Britain. Police shootings and terror attacks were recorded on cell phones. In pop culture, we collectively mourned for Prince and Carrie Fisher, gaped in astonishment at Sean Penn’s gonzo interview of El Chapo, and celebrated human achievement at the Rio Olympics. Reporters turned these events into stories that drew the attention of millions of readers.

A new report out this week from web analytics firm Chartbeat reveals the best of the best — “the stories that defined the breadth, the depth, and the power of journalism in 2016” — drawing on data from more than 50,000 media sites around the world.

How does one story stand out in a sea of content? It has to be outstanding journalism.

The 102 stories on the list had the most total engaged time — how long online visitors spent actively reading — of all the stories that Chartbeat measured. In total, they commanded 2.5 billion engaged minutes, or almost five millennia of the world’s collective attention. Not surprisingly, the list is dominated by politics, with Nate Silver’s Election Forecast at the top. The top breaking news story is CNN’s coverage of the Orlando nightclub shooting in June. Sports, opinion and entertainment make the list as well.

How to Stand Out

“Political stories ruled 2016. Between the U.S. election and the Brexit referendum, political stories made up the majority of the top stories, including nine of the top ten. This differs greatly from 2015, which only had one political story make it into the top ten. Even more surprising is the breadth of formats delivered this year: from interactive polling experiences to live blogs and fact-checking, this year’s political coverage proves that innovative storytelling is alive and well.”

“In many ways, this was the Year of the Interactive, with election prediction pages and live results pages captivating our attention and driving a massive number of engaged, repeat visitors. The top story, 538’s General Election predictor, received more Engaged Time than the top five stories of 2015 combined.”

3. All Kinds of Breaking News

“Breaking news stories were second only to politics this year and made up a solid 24 of the top stories. While many of the top political stories built up traffic across the year, the top breaking stories garnered most of their traffic in the hours and days after the events they covered. That attention runs the gamut from major storms to winning Powerball tickets, proving that breaking news comes in all shapes and sizes.”

“In a world where attention is scarce, 2016 proved that longform content still has a strong role in engaging and moving readers, with articles on Tiger Woods, 9/11, and El Chapo leading in this category. While last year’s overall top story was The Atlantic’s longform piece, What ISIS Really Wants, with 3:00+ minutes of average Engaged Time, longform was pushed to just outside of the top 10 this year.”

“Powerful, personal narratives dominated the list of top opinion articles, driven by strong social traffic, demonstrating that when we emotionally connect with a story, we’re more apt to share and discuss it. Many 2016 opinion pieces focused on the moral, ethical, and emotional reasons one might support Clinton or Trump.”

“Articles with a strong social message were a major part of the national discussion in 2016. Notably, many of them were told from a first person perspective. From major investigative pieces rooted in undercover work to the moving letter from a Stanford student to her assailant, first-hand accounts and breaking news affecting personal and societal rights captured our attention as well as our empathy.”

This Friday we’re hosting a special #MetricShift Twitter chat with Chartbeat’s head of data science, Josh Schwartz to discuss more about the most engaging stories of 2016.

Send your questions ahead of time using the hashtag #MetricShift and follow along with the chat on Friday at 1 p.m. ET. See you there!