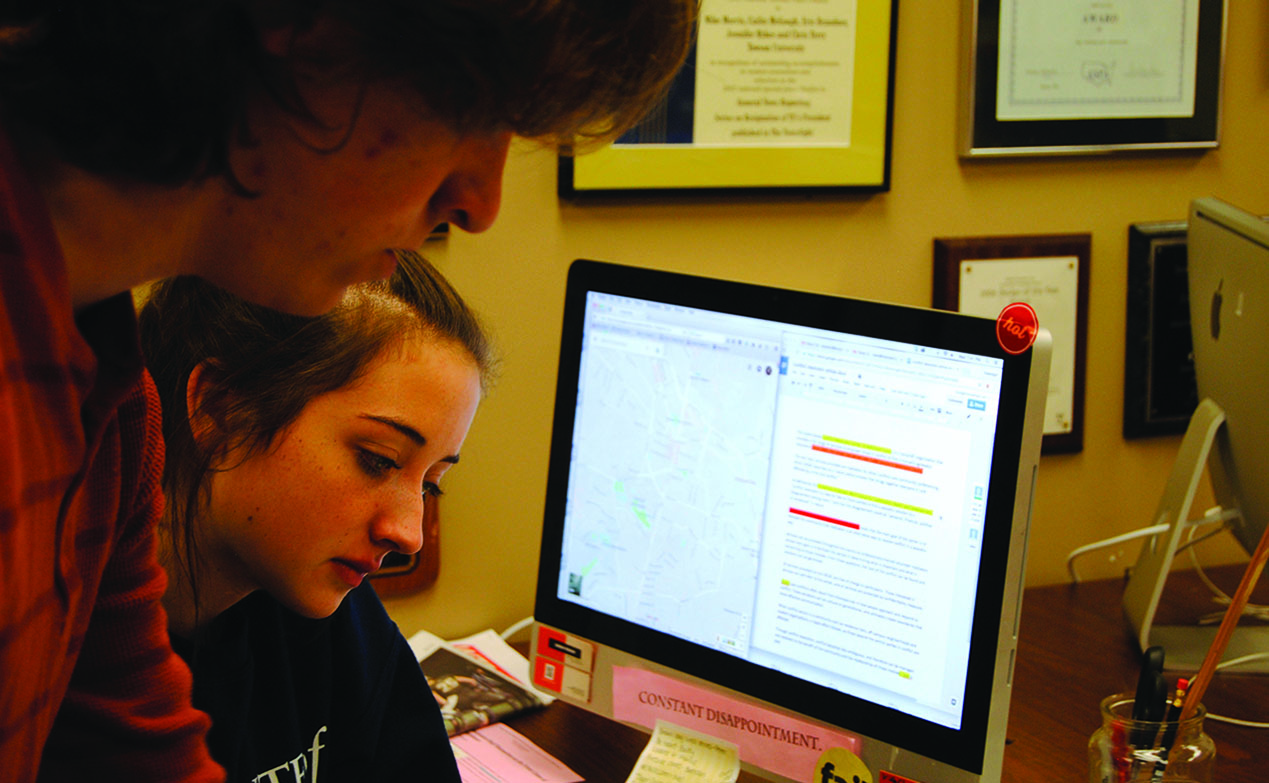 Two students compare an editing assignment with a Google map during a fact-checking exercise. Photo by Sam Shelton.

During this unique presidential campaign, the words “fact-checking” have become something of a mantra. Entire sites like FactCheck.org have tried their best to “monitor the factual accuracy of what is said by major U.S. political players in the form of TV ads, debates, speeches, interviews and news releases.”  Countless news organizations and individuals have joined the process, often working in real time during major events such as debates.

Computers in the classroom allow instructors to give students a more in-depth exposure to fact checking – while also offering lessons about the limits of online references.

One of the challenges facing anyone trying to verify factual accuracy is the immense number of social media and other outlets. It’s hard to imagine any organization even being able to keep up with the torrent of information and misinformation, let alone check its veracity. But most people would agree that journalists should be doing everything they can to separate fact from fiction.

As educators, it seems impossible to overemphasize the importance of fact-checking. Both in the classroom and beyond, there is a major push to impress upon students that without fact checking, it’s game over – both for journalists and the public.

As someone who has worked as an editor and taught News Editing classes, I’ve come to give fact-checking ever more prominence. There are a few reasons for that shift. First, a lot of the fundamentals of copy editing can now be handled to some extent by computers. Spell check, grammar check and inline style guides (such as AP Styleguard for Word) do a lot of the grunt work that editors once spent a good deal of their time on.

At the same time, computers in the classroom allow instructors to give students a more in-depth exposure to fact checking – while also offering lessons about the limits of online references.

From my early days of teaching News Editing, I did my best to make sure students were looking for common red flags when it came to facts. I’d walk them through the standard list of things to check:

After an introductory lecture, I’d have my friendly librarian wheel in a cart full of resources that could be useful in checking facts. Afterward, we’d do some basic fact-checking together, with me giving students a list of errors that had been made in major media outlets and that I tracked down through published corrections – still a great resource, with this as a good starting point. Finally, I’d give students some articles with factual errors in them, and they would use the reference works to try to correct the problems. It was better than nothing, but it was limited.

Today, with students having access to online resources, I can give them much more challenging exercises. Over the course of several exercises, I require students to locate and use a wide variety of primary resources. Some examples:

Preparing these exercises takes a little effort, but in my experience it is well worth it. Here’s how I create them:

My proudest – and simultaneously most embarrassing – moments in the class come after I return assignments and go through the list of errors students should have spotted and attempted to correct. Occasionally, a student points out one that got past me (and the original writer and editors). Of course, there’s extra credit for that – and one more challenge to add to my list for the next semester’s students.

Thom Lieb is a professor of Journalism and New Media at Towson University in Maryland. He is the author of “Editing for the Digital Age” and “All the News: Writing and Reporting for Convergent Media.” He is also publisher of SitDownListenUp.com.