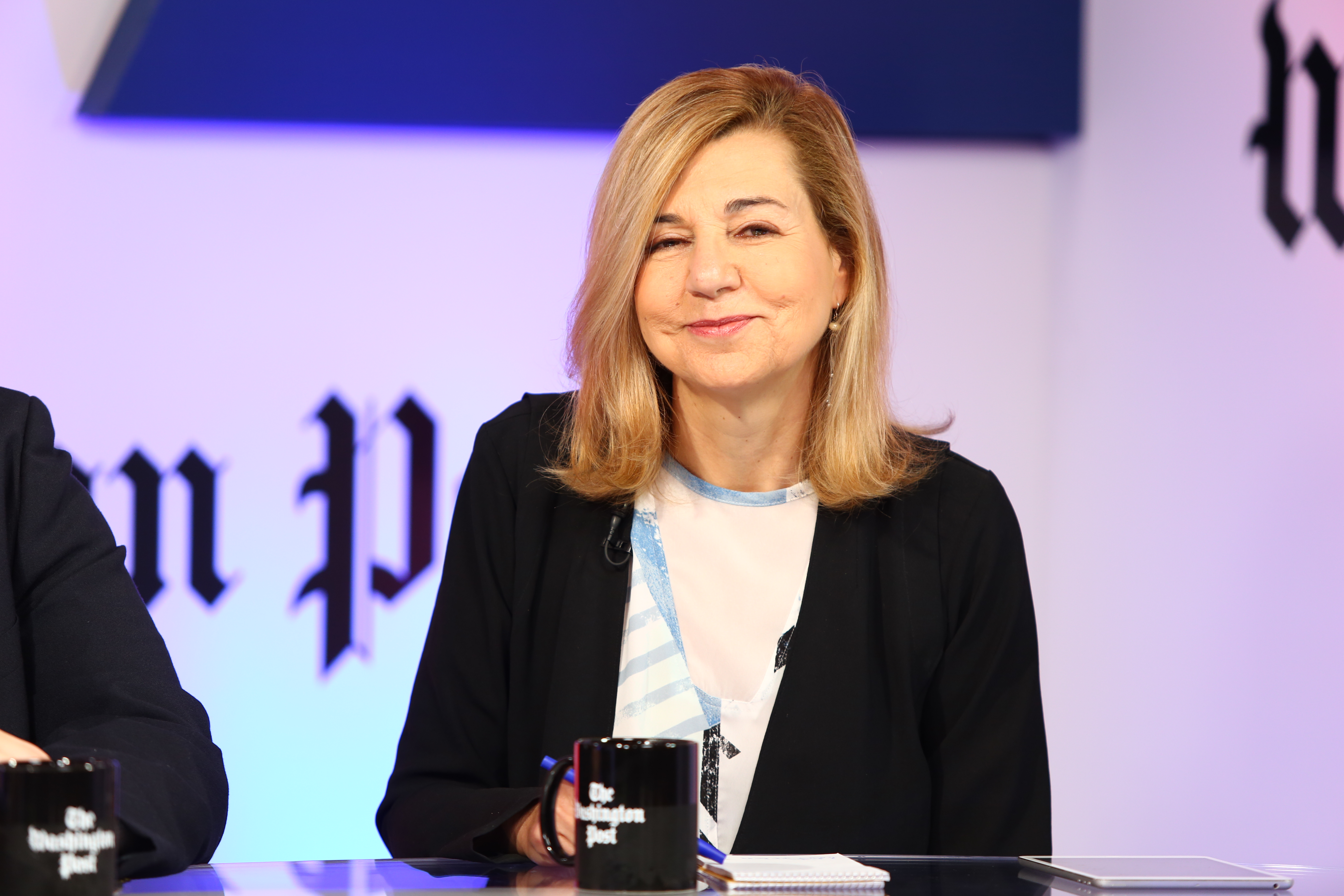 Margaret Sullivan joins the podcast this week as our special guest. Photo by Eric Hanson for the Washington Post.

In the news this week, Snapchat fired its Local Stories editors, but will have soaring revenues ahead, according to a projection from eMarketer. YouTube is trying to grow up, funding original shows on YouTube Red, while reining in popular video stars — but not without controversy. And Jim VandeHei , co-founder of Politico, reveals more details about his unnamed new venture, which got a cool $10 million round of funding. We speak to Politico’s Peter Sterne about Matt Lauer’s skewering on Twitter after his presidential Town Hall disaster. Our Metric of the Week is Snapchat Views, and in our one-on-one we’re joined by Washington Post media columnist and former New York Times public editor Margaret Sullivan.

"Ombudswoman is a very bad word, I think. I don't really think public editor sounds that great either. But it's a little bit better." - Margaret Sullivan on being the public editor at the New York Times

Margaret Sullivan  is the media columnist for the Washington Post. Before joining the Post, she was the New York Times public editor, and previously, the chief editor of the Buffalo News, her hometown paper where she started as a summer intern. She was a member of the Pulitzer Prize Board from 2011 to 2012, and was twice elected as a director of the American Society of Newspaper Editors, where she led the First Amendment committee.

Peter Sterne covers the digital and print media industries for POLITICO Media. Before joining POLITICO, he interned at the New York Observer and the Columbia Journalism Review.

Snapchat Fires Local Editors, While Its Revenues Are Expected to Soar

Social media upstart Snapchat has had to make big changes on the way to a potential IPO. Most recently, it laid off 15 editors of its Local Stories initiative, where thousands of people vied to get their Stories featured in city feeds. The company will focus more on “live moments” from events. As Mashable’s Kerry Flynn noted, Snapchat is opting for events with official sponsors or partners, a bigger money maker than local content. And that’s important for Snapchat as it has to focus on battling competitors like Instagram, which recently launched its own Stories feature.

Meanwhile, eMarketer recently projected that Snapchat would triple its current ad revenue to hit nearly $1 billion in 2017 and $1.7 billion in 2018. Despite that explosive growth, it would still only take in 2% of social media revenues. As eMarketer points out, Snapchat has a 31% share of social media users in the U.S., so the ad market share is lagging badly. The report finds that Discover, the section of major media content on Snapchat, makes up 43% of the company’s ad revenues, but that Stories will overtake that next year. That means that publishers who have focused intently on the Discover section will need to begin putting more resources into Stories as well. And while losing the Local Curators is a blow to new forms of local news coverage, it does show that Snapchat is getting more serious about profits and its business.

YouTube has had a tricky relationship with creators on its platform. They’ve complained about poor ad revenue splits in the past, and now they’re up in arms about notifications they’re receiving about inappropriate content for ads. The YouTube creators, like Philip DeFranco and Hank Green, were upset that their content about current news or even more serious topics were deemed out of bounds for advertisements — which means less income for the creators. DeFranco even started a special hashtag on Twitter, #YouTubeIsOverParty, that trended for nearly a day. YouTube responded by saying that it hadn’t changed any rules about video content, but was just being more transparent by sending notices, and giving video makers a clear way to appeal those decisions.

While YouTube is in its rights to remove content it deems inappropriate for any reason, the top creators represent a big talent pool and magnet for users, so the company needs to handle them with care. And speaking of talent, YouTube has also been on a tear funding original series for its pay service YouTube Red, including a couple new shows from BuzzFeed Studios. The service costs $9.99 a month, and removes all advertising from videos throughout YouTube. But to lure people to the service, YouTube hired Susanne Daniels, an exec formerly with MTV and the WB. The L.A. Times’ Yvonne Villareal wondered whether it was too little / too late for YouTube to take on established streaming services such as Netflix, Amazon and Hulu. But a Credit Suisse analyst projected that YouTube Red would go from 5.7 million subscribers this year to 61 million by 2022. That’s a long way to catch Netflix, which is currently at 66 million, but YouTube does have a massive base of viewers, so converting just a tiny portion could mean a big payoff.

After a contentious split with Politico owner Robert Allbritton, co-founder Jim VandeHei left with plans to start his own venture. Now, we’re getting more detail about that venture, set to launch next year, from a story in the Wall Street Journal by Lukas Alpert. The company still doesn’t have a name, but it has money, $10 million to be exact, with funders including Lerer Hippeau Ventures, NBC News, and the Emerson Collective, headed by Laurene Powell Jobs, wife of the late Steve Jobs. Other investors include Greycroft Ventures and David and Catherine Bradley, owners of The Atlantic and Quartz. Alpert says that the new publication will focus on “tech, health care and business news, and will include some political and media news.”

As for how it will make money, VandeHei will take a page out of his own book with Politico, aiming at high-level executives rather than political insiders, and charging money for subscriptions. The company already has 17 employees and is expected to reach 50 to 60 by the time it launches, with headquarters in Alexandria, Virginia, and an office in New York. As VandeHei  told the Journal: “You just need to produce something people want, need and get addicted to. That’s our aim.” And that’s what he created with Politico, and he’ll be taking a few former Politicos along for the ride, including Mike Allen, who ran the popular Playbook briefing. Whether they can replicate their success in other realms remains to be seen. But they obviously have the digital chops, and funding, to make a run for it.