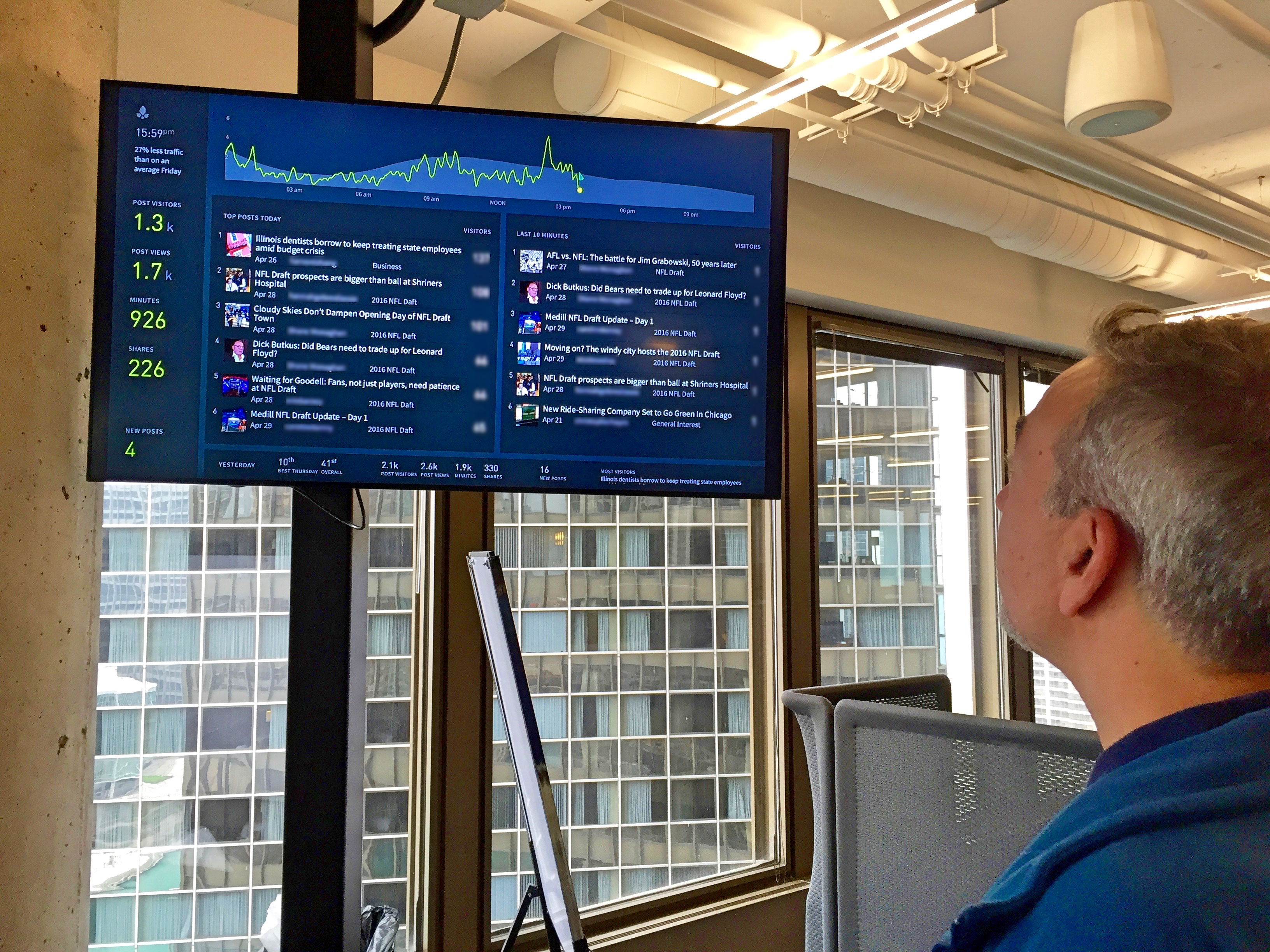 During this spring’s NFL Draft in Chicago, graduate student reporters at Northwestern University’s Medill School of Journalism, Media, Integrated Marketing Communications had their eyes fixed on two screens: one tracking draft picks and the other, a newsroom monitor, showing real-time audience analytics for their site, Medill Reports Chicago.

Both provided plenty of fodder for conversation: Was it smart for the Bears to trade up for their first-round draft pick? Why was a Medill reporter’s post about the trade attracting attention, along with posts on a checkers-playing wide receiver, the fate of the Oakland Raiders franchise and the draft dreams of J.J. Watt’s brother? Was a tweet from the NFL’s vice president of football communications with a link to a student’s story driving traffic?

For Scott B. Anderson, an assistant professor at Medill and managing editor of Medill News Service and Medill Content Lab, the audience metrics raised a different question, one facing many college newsroom instructors: What is the proper role of analytics in the newsroom-as-classroom?

Read the first part of this series on the different approaches j-schools take to train aspiring engagement editors.

“What I tend to lean toward is celebrating the stuff that does well — sending out e-mails or telling people individually that you had a top-five story or you got a lot of pickups on Facebook,” Anderson said. “I try to focus on the how and the why versus telling everyone here is your scorecard for the week.”

Using analytics can help students evaluate and improve their journalism. But it can also throw up roadblocks through low readership numbers, chasing metrics before grasping the basics of reporting or making broad assumptions from limited data.

The result is that college newsrooms — training centers, outlets of record and content distributors — are still debating what audience engagement metrics and other measures of impact to use.

Medill Reports Chicago, part of the Medill News Service, is like many university-operated, student-powered publications. It exists to showcase student work and highlight the school’s teaching hospital training. Professors who run these outlets aim to replicate a professional newsroom — except, in many cases, when discussing audience metrics.

“Our mission isn’t to get millions and millions of page views for Medill,” said Anderson, who spent much of his career in major metropolitan newsrooms. “We focus on the primary mission, which is did the student do a good story? It’s not about building a big brand or big business ultimately.”

That, many professors say, is their goal — teach students about the importance of engagement metrics and making an impact without overstating the need for their relatively small, niche news organizations to attract huge audiences.

Jessica Pucci, a professor of practice at Arizona State University’s Walter Cronkite School of Journalism and Mass Communication, has a nuanced message for students.

“I tell them a story can be good in many different ways, but if no one reads it can you really say it was good?” she said. “Everyone knows what our audience goals are, but we definitely wouldn’t shame anyone who has a low engagement rate. We look at the lows and say why did that happen? What could we have done differently? It’s a teaching moment.”

Pucci, who leads social media and analytics for Cronkite News, the news division of Arizona PBS, said that “not only are we not encumbered by the size and scale of larger media organizations, as a public broadcasting network we aren’t ad-driven, so we are not driving for page views.”

In fact, few university-run newsrooms face external pressure to report their numbers. At Capital News Service, the news organization operated by the University of Maryland’s Philip Merrill College of Journalism, page views are not the most important audience metric, said Sean Mussenden, director of the CNS Digital Bureau. He prefers advanced measures of engagement such as share of returning visitors, time spent on site and social media traction — and he wants students to think critically about what metrics matter most to them.

The most common analytics tools used at universities are Google Analytics and Chartbeat, which charges a monthly or yearly fee. This fall, Capital News Service plans to add another platform to its arsenal: Parse.ly. The service, which typically costs money, is free for Maryland and other schools (including Northwestern, Arizona State and the University of Florida) as part of the University Partners Program, which began with four schools last fall, grew to seven in the spring and will reach 13 schools by fall.

Ben Probert, who runs the Parse.ly program, said the idea is to provide independent student publications and university-operated news outlets access to its dashboard so that faculty and students can discuss what metrics are most important to track and what they learned from analyzing audience data. Schools must report these findings at the end of the semester, and this fall the schools with the top projects will be rewarded with an invitation to extend the free partnership.

Projects already published on Parsely’s website reveal the range of data that universities have sought to gather, including the days and times that are best to publish articles and social media posts, the ideal story length for reader engagement and how social interactions and social referrals impact website traffic.

Pucci, who participates in the University Partners Program, advises students to focus on different audience data depending on the publishing platform and story type. Scroll depth is important for stories with graphics, she said, while Nielsen ratings and YouTube views matter for broadcast stories.

Quantitative metrics are not the only way for student journalists to measure audience engagement. Jere Hester, director of news products and projects at the CUNY Graduate School of Journalism, encourages students to think about whether their stories have — directly or indirectly — made an impact on the communities they cover as beat reporters.

“If we declare victory, it’s going to be where our stories brought action,” said Hester, who runs NYCity News Service, CUNY’s primary outlet for student work.

One such victory came in 2014, when student reporters teamed with New York Daily News reporters on a three-part series about how the city failed to respond to mold complaints in public housing. The articles sparked a city council hearing, a city investigation that confirmed the reporters’ findings and the appointment of a “special master” to oversee the city’s response.

One of the ongoing debates at CUNY is how the curriculum should address the variety of ways to measure this kind of real-world engagement and impact.

“We have a social media tools class that is more focused on distribution and audience growth,” said Carrie Brown, director of CUNY’s graduate program in social journalism. “It’s a tension point because we think that’s where the industry is now but not where it’s going. The whole rest of the program, we barely talk about that stuff at all. We talk about how will you show impact on your community?”

Brown encourages students to interview people from the communities they cover about what impact the stories had on them. Elsewhere, however, that kind of data is only anecdotal and not systematically gathered.

The Impossibility of Offsite Metrics

Similar limitations apply when measuring offsite metrics. When stories are republished, how do audiences engage with that content and what kind of impact does it have? It’s an important question for university-operated news services that regularly feed student work to news outlets with a much broader reach, but also a question no one can answer.

At Cronkite News, the inability to track offsite analytics is “probably our biggest pain point,” Pucci said. She uses Google Alerts to tracks which media outlets run student content, but some outlets do not link back to the original story (they aren’t required to) and she has no systematic way of gauging how her reporters’ stories perform on other news sites.

Matt Sheehan, director of stories and emerging platforms at the University of Florida College of Journalism and Communications, agreed that tracking the offsite performance of stories is “not an easy bridge to cross.” The college’s model of “report once, publish everywhere,” means that student work appears not only in college-controlled media properties but also in outside news outlets.

Tracking media pickups of CNS stories is not an exact science at Maryland’s Capital News Service, either. Mussenden uses a mixture of news alerts and personal communication with the 40-plus news organizations that run students’ stories.

“We get a general sense of how a story does,” but nothing beyond that, Mussenden said. “We have been thinking about ways to track outside mentions better, but we haven’t figured out a way to do that without placing a big burden on our clients.”

Nor is there an way to track offsite for those in the University Partners Program. Parse.ly provides plenty of on-site data but is limited in the outside data it can collect.

“The only way we are getting anything back [from other websites] is if our code is on the page,” Parse.ly’s Probert said. “[News outlets] can see what other websites are referring traffic back to them, but only if there are links. If it’s just a reader going to that site and only that site unfortunately we can’t track that.”

The reality is that for many schools, the teaching hospital model is first and foremost meant to give students experience in a working newsroom. That’s the measure of success. Attracting huge audiences is secondary.

“Our first priority is going to be on-site content,” Mussenden said about CNS. “It’s important for us to know and measure impact, but from a teaching perspective, it’s more important that students have real metrics, real traffic, a real user base to pay attention to and we have that with our own platforms. It’s a bonus when people use our stuff.”

Added Pucci: “I want [students] to get a really clear picture of how content works on one site. Adding someone else’s site introduces so many other variables into the equation. Would it be great to have that data for every single story? Absolutely. But I just chalk it up to, well, if they can’t get the entire picture then at least they can get a really clear picture of the story’s performance on our site.”

One response to “Practicing What They Preach: J-School News Services Track Engagement and Impact”