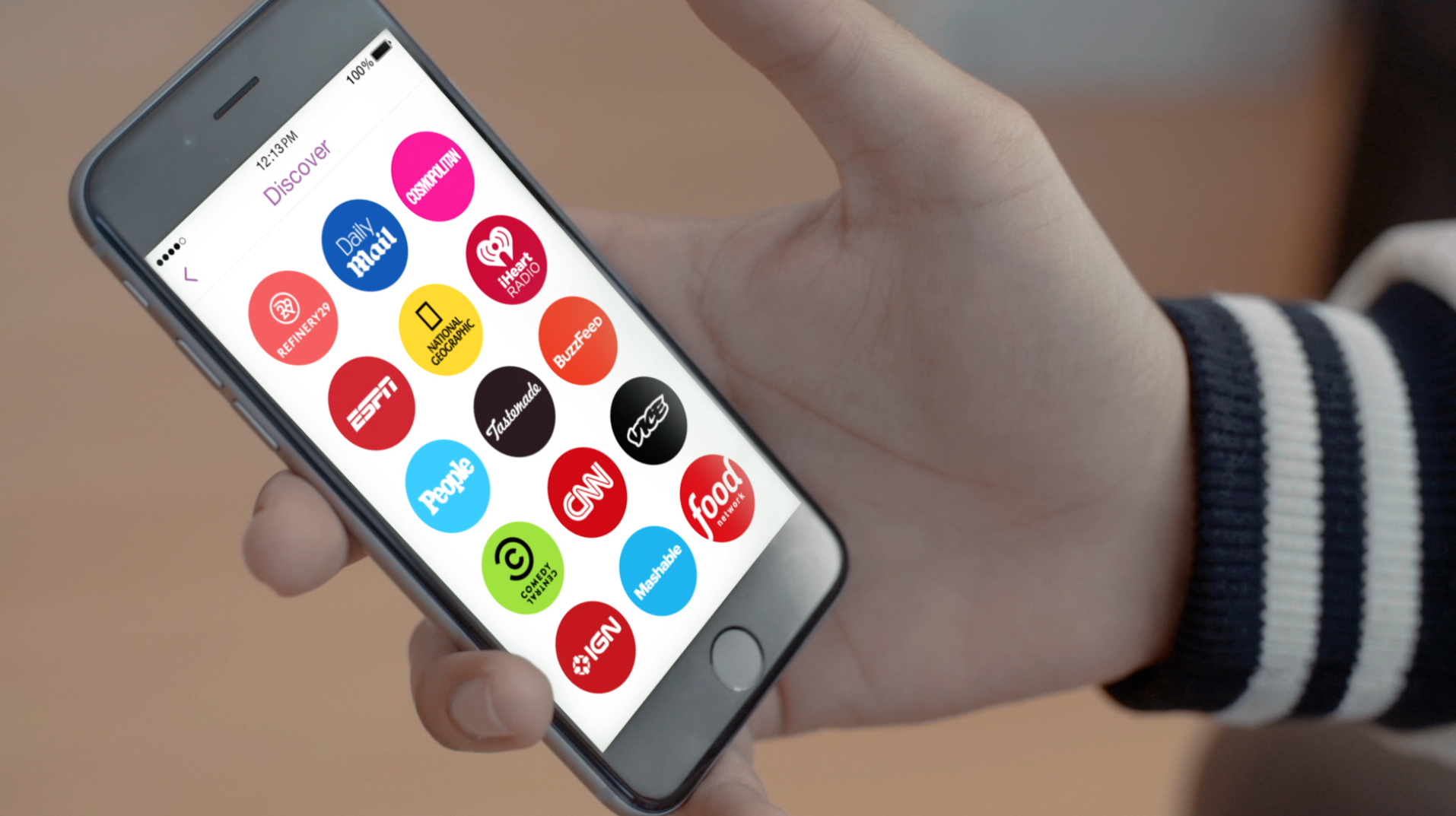 A look at Snapchat's current Discover page. The company is introducing a redesigned user interface to help drive users to its Discover page. (courtesy Snapchat)

On our 200th episode, we’ll discuss BuzzFeed dropping a big ad deal with the Republican National Committee because it didn’t want to create native ads for Donald Trump. New projections show that Internet advertising will surpass broadcast TV ads by next year. And Snapchat redesigned its Stories section to give more prominence to publishers. Our Metric of the Week is the “meta referrer tag,” and we talk with Conde Nast Traveler’s Dominica Lim.

"It's about how much time people are willing to spend with you versus others. It's really about where content is in people's mind rather than what screen or app they're in."- Dominica Lim on metrics

Dominica Lim is the Associate Director of Community Development at Conde Nast Traveler. Her past work involves working at Time Inc., Al Jazeera America, the iconic I Love NY brand as well as in the non-profit sector.

Despite the news that BuzzFeed hadn’t hit its revenue targets last year, the upstart digital media company still decided to turn away business. Of course, the business it turned down was a $1.3 million deal creating native ads for the Republican National Committee. On Monday, BuzzFeed CEO Jonah Peretti sent a memo to staff announcing they would pull out of that deal, which was signed before Donald Trump became the nominee. The decision was made on the business side of BuzzFeed, and Peretti said they turned down the deal because they didn’t want employees “promoting things that limit our freedom and make it harder for them to live their lives.” And his memo noted that “we don’t run cigarette ads because they are hazardous to our health, and we won’t accept Trump ads for the exact same reason.”

The RNC’s Sean Spicer told CNN they never intended to use BuzzFeed and “space was reserved on many platforms.” Of course, BuzzFeed has already run native ads and videos sponsored by campaigns, and will still take money to run native ads for the many campaigns ahead in the fall. The problem is, where will BuzzFeed draw the line? What about hard-line conservative candidates for the House of Representatives? Or state ordinances that hurt the environment? Once it starts playing favorites with ads, it’s not far from being perceived as taking sides in races. And as the Guardian’s Megan Carpentier pointed out, most of the reaction to BuzzFeed’s move has been positive among media watchers, but no one has complained about the way native ads with politicians could backfire on the publication. Especially when people already have a hard time figuring out the difference between native ads and real editorial.

We know smartphone and internet usage is going through the roof, so it’s no surprise that ad dollars will be moving into digital even more in the years ahead. PricewaterhouseCoopers’ annual Global Entertainment and Media Outlook report predicts that U.S. internet advertising will be worth $93.5 billion by 2020, up from just $59.6 billion last year, and it’ll overtake spending in broadcast television by next year. A large part of that growth is expected to come from mobile advertising, which will quadruple its size from 2015 by 2020. And mobile video ads will jump even more. If you’re a regular listener to this program, you’ve heard all the trendlines before: print ads are down, digital and mobile ads are up, TV is going sideways.

Since its inception, Snapchat’s user interface has had a reputation of being nearly impossible to use for those of us no longer in high school. But the platform is not just for kids anymore. In the past two years, Snapchat has launched a Discover section for publishers and realized that advertising is its ticket to revenue growth. But the problem is that most of the usage on Snapchat is from people sharing snaps with friends — that is, with communication, not reading news. But Snapchat is changing that with a new design that merges publisher content with user-generated Live Stories, which typically come from events. Plus, you can now subscribe to publishers on Snapchat, which means that the publisher’s stories will show up in your feed with snaps from friends.

These moves are definitely aimed at pleasing publishers like CNN, MTV and Vox, which have dedicated teams creating content just for Snapchat. If publishers are putting money into original content, and that content isn’t seen enough, then it’s hard to sell ads and recoup their investments. The Verge’s Casey Newton noted that Cosmopolitan gets 20 million views per month on Snapchat, but that’s still far from a smash hit. And Newton points out the biggest issue is that a lot of the publishers’ content looks alien to Snapchat, with text- and photo- heavy articles vs. the video creations of users. The platform has done a great job getting the attention of Millennials, including my teenage son, but it will have a tougher job converting them into voracious news readers and watchers on Snapchat.

Newspapers are flailing. That’s not news anymore. We all know the struggles of print newspapers, especially the metro variety and the big chains. It’s easy to blame digital disruption, the rise of social media and smartphones, Google, Facebook and so many other tech boogeymen. And that’s partially right.

But a big heaping of blame can be laid right at the feet of the newspaper companies, which had years of monopoly control over news in their communities, years of high margins, and never really invested in the future. Change is good, but change is hard. Especially when you get fat and lazy with your easy success.

But now that newspapers are on the skids, being snapped up by billionaires, hedge funds and anyone with a bright idea to “save” them, there’s a scent of desperation in the air.

And now that desperation has a name: tronc. Yes, tronc. This is the name that the Tribune Publishing Company is taking for the digital age. Oh sure, it’s supposed to stand for Tribune Online Content. So why not stick with T.O.C.? Perhaps the logic is that because tronc is lowercased, it must be hip and funky enough to keep up with the digital upstarts. Of course.

It didn’t take long for tronc to become a hashtag of ridicule on Twitter. One person dubbed the phrase “ba-donk-a-tronc,” while another said the name sounded like Hulk Hogan punching the Jack of Hearts.

The less cynical view is that they wanted to show Gannett they were on top of things, able to go it alone in the digital age, and ready with a new name and new business plan. The more cynical view, from my colleague Mark Johnson at the University of Georgia, was that they picked the worst name possible to dissuade Gannett from buying it, a sort of rebranding poison pill.

In any event, their press release about the name change was filled with so many incomprehensible buzzwords, you almost thought it was from The Onion.

“We remain a content curation and monetization company focused on creating and distributing premium, verified content across all channels… We are embracing this evolution with open arms and executing a transformation strategy focused on leveraging artificial intelligence and machine learning to create an interactive and customized user experience.”

If this sounds familiar, it should, because it’s almost a rerun of what happened when tech billionaire Chris Hughes took over The New Republic magazine, promising to create a “vertically integrated digital media company.”

And this gets to the heart of the issue: the very difficult balance between creating quality journalism, watchdog journalism, important journalism, and creating generic “online content” that is aggregated, annotated, shared and spread on social media with the intent of growing audience and eyeballs. What’s missing in these great ideas for turning around newspapers is a connection to the community. Local media only work when they are truly local, with a real connection to the people they serve.

When the goal of the local news outlet is to attract “eyeballs” for advertisers, and not connect with people in a meaningful, purposeful way, then the mission is lost. And no matter how cool your technology is, no matter what weird funky name you adopt, you’ll still fail in this age or any age.