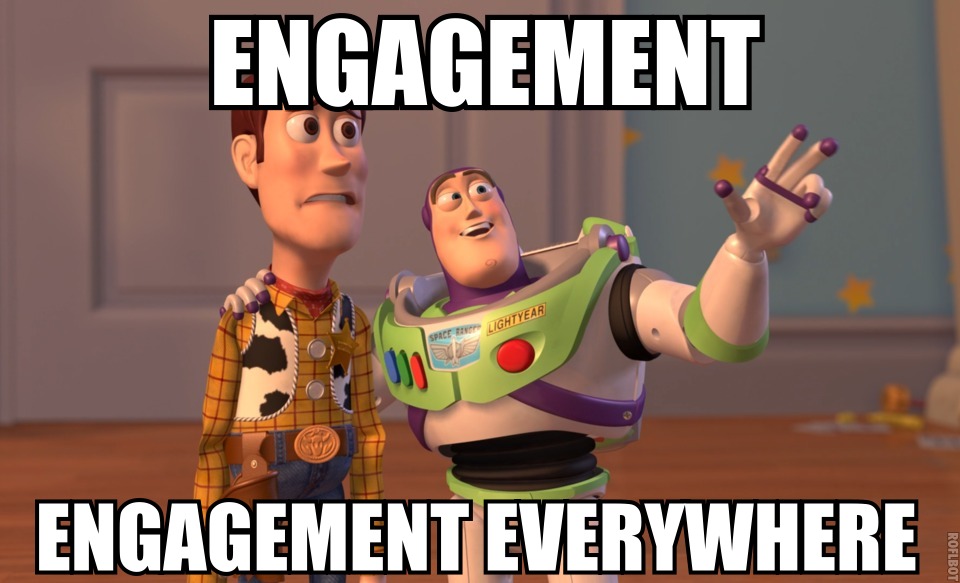 The last few years have seen an increase in engagement analytics and metrics monitoring. Will the future of journalism mean that engagement is everywhere? (Kira Hoffelmeyer)

Over the last few years, journalism has seen this spike in the use of one buzzword: Engagement.

“I’ve definitely seen a transition away from some of the basic metrics like page views and clicks towards more sophisticated metrics.”—Alex Curry

Across the country, engagement editors and the teams working with them are ever on the rise.

So What Do Engagement Editors Do?

“They are the children of the copy editor, the public editor, and the paperboy. Instead of grammar and style, this new breed of editor crafts online tone and relationships with readers. Web traffic and, if subtly, advertising dollars depend on their work.”

These editors make metrics matter. How? They create SEO and web-friendly headlines, select stories to put on social media and engage with the community.

But these editors (and everyone) have to work beyond these metrics. They’re important, but they’re not the end-all-be-all.

So What About Site and Engagement Analytics?

Everyone knows that unique visits and page view numbers matter. News organizations will compare this month’s data to the last month’s. (Or at least that’s what I do, and maybe I’m crazy.)

This chart shows the forms of analytics used in newsrooms, according to a study done by Federica Cherubini and Rasmus Kleis Nielsen of the Reuters Institute.

From there, it focuses on the time engaged, returning visits and bounce rates.

According to a report from the Engaging News Project, some papers highly cater to specific demographics. The Arizona Republic tailors its content in 16 different community editions. It builds different editions using the demographic metrics for Baby Boomers, Hispanics, Millennials, etc., and each group gets a separate product.

Metrics Are Important. But They’re Hard to Understand Sometimes.

Scratch that. Most of the time.

As the engagement editor for The Emerald, I find I’m sorting through what metrics matter. There’s tons of data available, but it’s hard to tell what’s worth the time.

It’s also hard to make the data matter. That’s perhaps the most important argument for having someone who understands analytics. As Alex Curry, a research associate from the Engaging News Project, told me:

“I’ve definitely seen a transition away from some of the basic metrics like page views and clicks towards more sophisticated metrics — like time on page — and even things where they’re looking at the community to engage what sort of impact beyond site visits or conversions they’re seeing from the reporting they’re doing.”

If you’re interested in more details about how publications like the Wall Street Journal, the Daily Beast or CNN (and many more) determine what analytics are useful, this report is helpful. Engagement, social media and analytics are most likely going to be driving forces in journalism as we move further into the social media age.

I reached out to some other sources to see if I could get some information relating to how their publications use analytics and social metrics, but unfortunately this cool information is typically tip-top secret.

According to a report by former Tow Center for Digital Journalism fellow Caitlin Petre, journalists used to fall on opposite side when it came to engagement metrics. Essentially, they either like and honor metrics, or they don’t.

But when I spoke with Curry, he said that it’s not as simple as that. “As far as the newsrooms we work with, I haven’t seen any that solely rely on metrics,” Curry said.

In a report released by the Tow Center for Digital Journalism, Tow Fellow Caitlin Petre wrote:

“The tracking capabilities of the Internet, as well as the ability to store and parse massive amount of data, mean that audience metrics have grown far more sophisticated in recent years.”

What Kind of Analytics Measuring Tools are Newsrooms Using?

Parse.ly also tracks real-time analytics and data from published articles, so you can pull from what performed well with your audience in the past.

NewsWhip’s technology “scans the world’s social media action” across all major social platforms. They say it happens “every two minutes.” They also provide a range of other services, which you can find more about here.

And if those don’t wet your whistle, Google only came up with about 2 million search hits.

What’s So Valuable about Analytics?

For this one, I talked to Alex Curry, who is a research associate at the Engaging News Project.

“I think the ability to get quick feedback about what sort of things are attracting people to their content is one of the biggest things that metrics do for newsrooms,” said Curry. “If you’re a reporter who has spent weeks and months on this big piece, and it goes out and no one’s reading it… It’s not necessarily the reporter. There could be a whole range of things — like how that content is being promoted on the site or on social.”

Do News Organizations Even Care about Social, Site and Engagement Metrics?

Like always, it depends on who we’re talking about here.

These are displayed in no particular order:

This is by no means an extensive list (or a well designed one at that), but rather just a small sampling of some of the bigger media groups that have these positions. (Logos courtesy of the respective media group, collage courtesy of me.)

“I would say newsrooms use (analytics) when they have someone there who can make sense of the numbers,” said Curry. “I think a lot of this comes down to what are the resources available in the different newsrooms.”

So What Do We Make of These Rising Engagement Editors and Their Teams?

“I think it’s a good thing,” said Curry. “A news outlet wants to survive, and there’s so much content out there that in order for them to differentiate themselves, in order to gain an audience and to create a loyal one, they have to use all the resources at their disposal. I think social media becomes one of these big resources.”

Kira Hoffelmeyer is a freelance writer for MediaShift. You can find her attempting to avidly tweet @kirahoffy. She is currently the engagement editor at the Emerald Media Group, and a senior journalism major at the University of Oregon. This summer, she’ll have her coffee in hand and on the local NPR affiliate as a Charles Snowden intern.