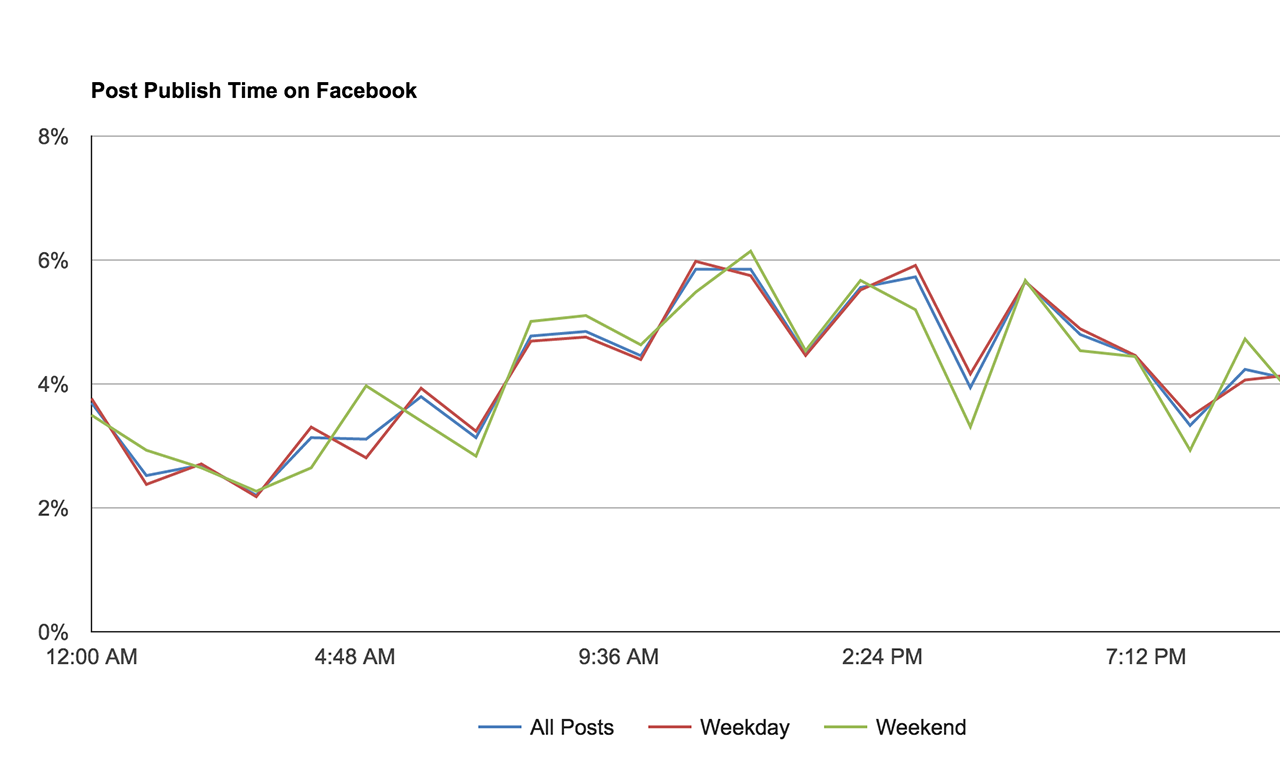 This post was originally published on the NPR tumblr.

A while back, we ran an analysis on our posts to Facebook and concluded that the platform was largely time independent in terms of whether a post succeeded. A post at 4 am on Saturday should be just as likely to find an audience as one at 10 am on Tuesday. Despite a solid statistical analysis, our editors found this data hard to swallow. So Dan Frohlich, our metrics analyst for digital, circled back to this question for us. His findings are below. They’re inconclusive but do seem to point us in a new direction. I’ll follow up with my own thoughts after his analysis. – Wright Bryan

Our audience engagement team has routinely had questions about whether publish time on Facebook impacts the performance of a story. Up until now, we’ve relied a lot on the graph of when our fans are online in Facebook Insights – something we refer to as the “Facebook whale.” But because we know our users see older content in their feed hours or even days after it was originally posted, we wondered, does it actually matter if something is published during a time when fewer Facebook users are online? That’s the question we set out to answer.

I want to stress upfront that this is not an experiment, it’s simply observational data based on posts we published over a 6-month period. I’ll explain more on why that matters later on.

I looked at the performance of 4,085 NPR link posts (excluding station links, video posts, etc.) from August 2015 through the first week of February 2016. The first thing I noticed is that we already publish most of our Facebook content during the daylight hours, peaking around noon (see graph below). This is also very similar across weekday and weekend. All times in this note are Eastern.

First I wanted to see how each hour of the day compares to the overall average of the 4,000+ posts. I looked at 4 different metrics: total reach (the number of people who saw a post), the total number of impressions (how many times a post was seen, including multiple views by one person), the number of link clicks (people clicking on a link back to npr.org), and the number of post consumers (people who interacted with the post in any direct way). The following table summarizes the results. A “No” means there wasn’t a statistically significant difference (at 95 percent confidence) between the overall average and how posts from a particular hour performed. All of the other time periods are marked on whether they were significantly higher or lower than the overall average.

This didn’t definitively answer the question of posting things on peak vs. off-peak hours. So …

However, since this wasn’t a true experiment, there are some things we should consider first before we declare peak-hour posting to be more valuable.

What This Data Does & Doesn’t Tell Us

One major complicating factor is how our editorial decision making has been impacted by the belief that publishing time does matter. For example, if we approach Facebook thinking we should maximize the traffic to our “best” content, and we believe one of the ways we do this is by publishing that content during peak hours, then we’re effectively creating a self-fulfilling prophecy.

So naturally it wouldn’t be a surprise that the hours that perform best in an analysis like this are the peak-traffic hours (if you assume that the quality of the content is more important than publish time). A true experiment would require us to roll a die or flip a coin to determine when we publish content (randomizing when our “best” content gets published). That would help control for our editorial judgment coming into play and we could more definitively answer this question. (We do not plan on actually running this experiment.)

There’s also the question of breaking news. My gut tells me that U.S. breaking news is more likely to happen during peak hours, simply because that’s usually when people are working (for example, a politician is less likely to make an attention grabbing statement at 3 am than 9 am).

The message I take from this analysis is that we should post more often from midnight to 8 am. Publishing our best material in the heart of the East Coast business day is either helping us or not hurting us. But neglecting the wee hours of the clock is a missed opportunity for stories that deserve an audience but are losing out in the competition for daytime slots. We are still reaching lots of people when we post after midnight. So my recommendation will be to add a few more posts so that we’re publishing into the feed at maximum intervals of 60 minutes.

What do you think? Do you have any insights to share on posting to FB? Hit me up on Twitter (ha!) if you do. – Wright Bryan