The Math Behind the Metrics 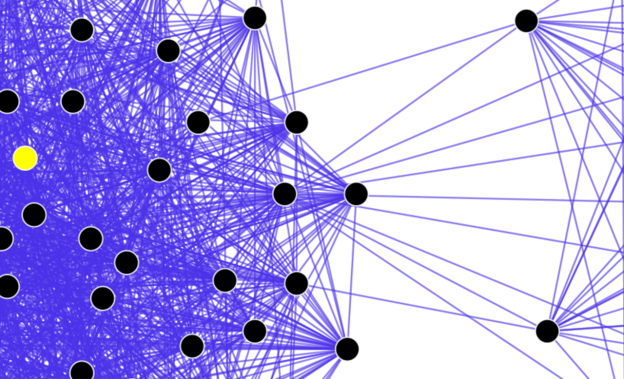 As part of the Coral Project, we’re trying to come up with some interesting and useful metrics about community members and discussion on news sites for our first product.

It’s an interesting exercise to develop metrics which embody an organization’s principles. For instance – perhaps we see our content as the catalyst for conversations, so we’d measure an article’s success by how much discussion it generates.

"It’s an interesting exercise to develop metrics which embody an organization’s principles."

Generally, there are two groups of metrics that I have been focusing on:

For the past couple of weeks I’ve been sketching out a few ideas for these metrics:

Here I’ll walk through my thought process for these initial ideas.

For assets, I wanted to value not only the amount of discussion generated but also the diversity discussions. A good discussion is one in which there’s a lot of high-quality exchange (something else to be measured, but not captured in this first iteration) from many different people.

There are two scores to start:

The current sketch for computing the discussion score is via two values:

These are pretty rough approximations of “how much discussion” there is. The idea is that for sites which only allow one level of replies, a lot of replies to a comment can signal a discussion, and that a very deep thread signals the same for sites which allow more nesting.

The discussion score of a top-level thread is the product of these two intermediary metrics:

Francis Tseng is a Knight-Mozilla Fellow for The Coral Project.

The nice thing about this approach (which is similar to the one used throughout all these sketches) is that we can capture uncertainty. When a new article is posted, we have no idea how good of a discussion a new thread might be. When we have one or two threads – maybe one is long and one is short – we’re still not too sure, so we still have a fairly conservative score. But as more and more people comment, we begin to narrow down on the “true” score for the article.

More concretely (skip ahead to be spared of the gory details), we assume that this discussion score is drawn from a Poisson distribution. This makes things a bit easier to model because we can use the gamma distribution as a conjugate prior.

By default, the gamma prior is parameterized with $k=1, \theta=2$ since it is a fairly conservative estimate to start. That is, we begin with the assumption that any new thread is unlikely to generate a lot of discussion, so it will take a lot of discussion to really convince us otherwise.

Since this gamma-Poisson model will be reused elsewhere, it is defined as its own function:

Since the gamma is a conjugate prior here, the posterior is also a gamma distribution with easily-computed parameters based on the observed data (i.e. the “actual” top-level threads in the discussion). We need an actual value to work with, however, so we need some point estimate of the expected discussion score. However, we don’t want to go with the mean since that may be too optimistic a value, especially if we only have a couple top-level threads to look at. So instead, we look at the lower-bound of the 90 percent credible interval (the 0.05 quantile) to make a more conservative estimate. So the final function for computing an asset’s discussion score is:

A similar approach is used for an asset’s diversity score. Here we ask the question: if a new comment is posted, how likely is it to be a posted by someone new to the discussion?

We can model this with a beta-binomial model; again, the beta distribution is a conjugate prior for the binomial distribution, so we can compute the posterior’s parameters very easily:

Again we start with conservative parameters for the prior, $\alpha=2, \beta=2$, and then compute using threads as evidence:

Then averages for these scores are computed across the entire sample of assets in order to give some context as to what good and bad scores are.

These metrics are just a few starting points to shape into more sophisticated and nuanced scoring systems. There are some desirable properties missing, and of course, every organization has different principles and values, and so the ideas presented here are not one-size-fits-all, by any means. The challenge is to create some more general framework that allows people to easily define these metrics according to what they value.

Tara Adiseshan is a Knight-Mozilla Fellow for The Coral Project.

How do we make sure that the metrics we collect don’t penalize newcomers?

It can be easier to figure out if you trust someone after you’ve known them for a long time. And the same is frequently true when it comes to trust scores or reputation scores. The problem is, when metrics are based on long user histories on a site, it can be difficult to make decisions about newcomers. I’ve really enjoyed reading Aaron Halfaker’s work on the treatment of good-faith newcomers in the Wikipedia community. In particular, Aaron’s work described the ways in which the tools used to maintain the quality of Wikipedia contributions also contributed to the community’s decline.

How do we best respect the privacy and safety of the community members as we build these metrics?

As we build our first product, we’ll be using data that publishers are already gathering. As someone who gets very excited about data science and anti-surveillance efforts, I’ve been thinking a lot about how we can build metrics that respect the privacy and safety of community members. It was helpful to learn about Tor’s usability research and the guidelines they use as they try to make their browser more user-friendly.

How do we make sure that the metrics we collect are inclusive?

This is something I’m looking for more research on, but something that I’ve had many conversations about with folks working in the comments / moderation space. For example, what does it mean to use vocabulary or adherence to punctuation and grammar rules as a way to decide quality? It is very possible to write comments that are perfectly punctuated, while still attacking individuals or community members. It is also very possible that a comment with spelling and grammar mistakes could be an incredibly thoughtful and meaningful perspective. It’s one example, but points to a broader question. How could our metrics be used for unintentionally exclusionary or intentionally malicious purposes? The code we write is political, and I think it’s an important part of the design / development process to acknowledge that. Emma Pierson’s work on gender parity in The New York Times’ comments sections was a great read.

What kinds of feedback loops are involved in the metrics we collect?

Moderation, community response, and reputation scores can all be important parts of feedback loops that shape online spaces. I’ve heard a lot about Riot Game’s rehabilitative moderation approach in the past. I’ve also been reading Justin Cheng’s research on how community feedback shapes behavior.

If there’s any work that you’ve also found interesting, let me know on Twitter!

Francis Tseng and Tara Adiseshan are Knight-Mozilla Fellows for The Coral Project.

The Coral Project creates open-source software to facilitate the importing, storage, moderation, and display of contributions to news websites.

This story was originally published on The Coral Project website.

Note from the author: Thank you to all the folks who pointed me toward some of these questions and work, including the Coral team and Nate Matias.