How Restorative Narratives Can Engage Communities After Tragedies 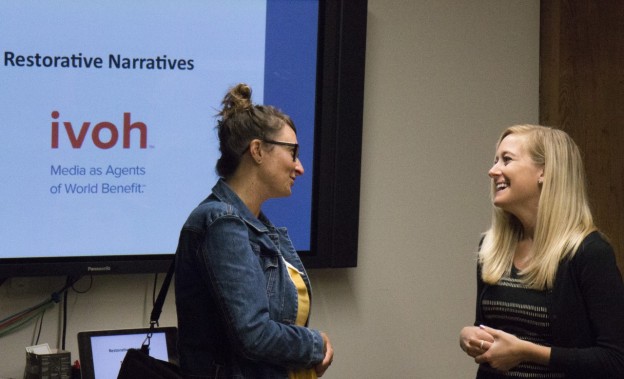 Mallary Tenore, right, in conversation with a participant at Experience Engagement's workshop on "restorative narrative." Photo by Emmalee McDonald.

The Experience Engagement un-conference in Portland, Oregon had hardly kicked off when the news rolled in: Yet another mass shooting in the U.S., this time at Umpqua Community College in Roseburg, just three hours to the south. Ten dead. More wounded. A community left in shock and grief.

As the news cycle unfolded, the whole media spectacle felt painfully familiar. Television crews searched for someone — anyone — to put on camera to share an account of the violence, newspaper reporters began compiling detailed dossiers on the shooter for their weekend editions, and journalists from all over the state and the country parachuted into a blue-collar logging town in rural Oregon for what would likely be the first and last time of their careers. “Somehow this has become routine,” President Obama said later that day. “The reporting is routine. My response here at this podium ends up being routine. The conversation in the aftermath of it. We’ve become numb to this.”

At our gathering that morning, the news arrived during a workshop on “restorative narrative,” an emerging genre that splits from journalism’s “if it bleeds it leads” orthodoxy and instead focuses on stories of long-term recovery and resilience. As the details poured in from Roseburg, our conversation turned practical.

“If we were a traditional newsroom, we would immediately kick into all of the routines that we normally follow,” said Mike Fancher, former executive editor of The Seattle Times. “We know this story, we know the sources, and we know the political framing, so we’d go out and cover it in the same way we’ve always done.”

Mike Fancher, former executive editor of The Seattle Times, takes the mic during a group session at Experience Engagement. Photo by Emmalee McDonald.

President Obama and Fancher are right, of course. Whether the news event is a mass shooting or a Congressional budget battle or a local school board meeting, media coverage is shaped by standard operating procedures that have become entrenched in newsroom culture. These routines have been taught as gospel at journalism schools and repeated day after day by working journalists for decades, often without a second thought.

But that seems to be changing. With the public’s trust in media reaching record lows and traditional business models failing, it no longer seems like heresy to question whether we might need to revisit our core assumptions about journalistic practice. Is the main purpose of journalism to filter daily events through a prism of conflict and tragedy? If not, what does the field’s future look like? Is it “objective”? Activist? Is it heavily mediated, with the journalist as a gatekeeper? Or is it instead participatory, with the journalist as a convener of community conversation?

These are the kind of questions that kept coming up at Experience Engagement, and they are the questions that frame this series. But on Oct. 1, in those raw moments after Umpqua Community College became the site of America’s latest tragedy, the workshop participants landed on a simpler question, one that seems so central to the intersection of journalism and civic life. University of Oregon Professor Nicole Dahmen perhaps said it best: “How do we cover these stories,” she asked the group, “in a way that makes a difference?”

The case for restorative narrative

We’ve all heard the horror stories. From the Sandy Hook shootings to the Boston Marathon bombings, journalists have earned a reputation for covering tragedies like primetime television spectacles, often with terrible consequences. But these high-profile blunders don’t tell the whole story. In fact, for every #CNNfail, there are dozens of instances when news reporters do their jobs admirably, double-checking the facts, confirming the accuracy of their sources and providing credible, useful information to the public. And there are just as many examples of journalists uncovering powerful human stories that help readers somehow make sense of the senselessness. The Pulitzer Prizes that follow are ample proof.

Crisis journalism can still improve, of course, and it’s worthwhile to discuss how reporters might operate differently in the immediate aftermath of tragedy. But it’s also important to consider what happens next, when the national journalists fly back to their home cities, the local reporters return to their regular beats, and the front-page headlines move on to some other news event. In most cases, the coverage ends — and the people whose suffering filled our airwaves and our news pages are left behind, forgotten by the journalists who showed up on the worst day of their lives and asked for an interview.

Mallary Tenore, executive director of Images and Voices of Hope (IVOH), thinks communities benefit when journalism is less sensational and more empathetic. On the morning of the Roseburg shootings, Tenore explained to workshop participants that news consumers need (and want) reprieves from the media’s wall-to-wall coverage of war, conflict, corruption and crime. “We’re not saying, ‘Don’t cover the trauma or the tragedy,’” Tenore said. “We’re saying the story doesn’t end there. In many ways, it’s just beginning.”

Mallary Tenore, executive director of Images and Voices of Hope, leads a workshop on restorative narrative at Experience Engagement. Photo by Emmalee McDonald.

Although IVOH only coined the term “restorative narrative” in 2013, it’s hardly some foreign beast suddenly being thrust onto unsuspecting newsrooms. Odds are you’ve probably read a restorative narrative in your favorite newspaper or magazine, and it’s probably the story you continue to bring up in conversation weeks, months, even years later. I can think of plenty of my own examples, like Skip Hollandsworth’s award-winning magazine story “Still Life,” which returns to the home of John McClarmock decades after most other journalists had disappeared. In 1973, McClarmock became a national celebrity when a devastating football injury left him permanently paralyzed and fighting for his life, but after a few weeks of media buzz, reporters stopped knocking on his door, flowers stopped arriving in the mail, and eventually friends even stopped visiting his bedside.

In “Still Life,” Hollandsworth shares the story of the 35 years that followed, weaving a powerful account of a mother’s enduring love and a family’s daily triumphs in the face of tragedy. Like all the best restorative narratives, Hollandsworth’s story doesn’t sidestep the painful details, but it doesn’t dwell on them either. From the account of McClarmock’s first weeks in hospital to the scene where the mother prays to outlive her son by one day so that he’ll never have to be alone in the world, the theme of Hollandsworth’s story is strength and recovery. And the effect is goosebumps.

Perhaps that’s the reason why “Still Life” remains a fixture on J-school reading lists and in magazine feature writing anthologies — and why restorative narratives keep appearing in The New York Times, The Washington Post, the Los Angeles Times, and other top publications. These stories connect with people’s lives in meaningful ways, which, research suggests, is a big reason for their popularity. A recent study found that stories eliciting an emotional reaction are the most likely to be shared on social media, and those that spark a positive emotional reaction (such as awe or inspiration) rather than a negative one (like fear or anger) are even more likely to go viral.

“In many ways, these stories are offering people a sense of hope,” Tenore said. “We think restorative narratives can mobilize people in ways that traditional doom-and-gloom stories really can’t.”

New routines for a new journalism

Of course, the cynical response to restorative narrative is that reporters simply don’t have time for it amid the demands of preparing stories for the daily newspaper, posting blog posts to the website and responding to readers on social media. And maybe the cynics are right. Existing newsroom routines already stretch journalists in a dozen directions, so it makes sense that restorative narrative might feel to them like an idyllic pipe dream.

But here’s the thing: Routines have changed before, and there are signs that they’re beginning to change again, even if only inch by inch. For example, in the turbulence created by journalism’s digital revolution, a host of major metropolitan newspapers switched to three- or four-day home delivery schedules, and online newcomers like Vice found success by serving up long-form storytelling with more depth and context than the breaking news reports provided by daily journalism.

Meanwhile, on television, John Oliver broke away from “The Daily Show” in 2013 to launch “Last Week Tonight,” a weekly satirical news program that attracted millions of viewers in its first season. The late New York Times media critic David Carr had predicted that the show’s weekly format would “never work,” but Oliver has shown that with the right combination of depth and flair, even television can produce “slow news” that moves the needle.

For restorative narrative and other forms of engaged reporting to take off, journalism will need to embrace routines that slow down the news cycle and give reporters an opportunity to look beyond the next morning’s headline. Meanwhile, journalists will also need to develop new strategies for identifying resilience stories in their communities — and for earning the trust to tell them candidly. In the next part of this series, I’ll outline a simple but powerful first step in that direction: deep listening.