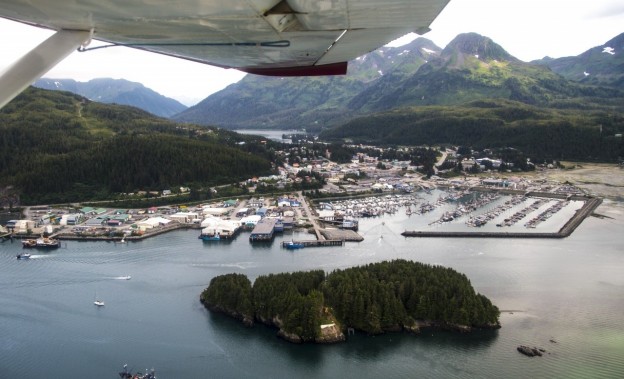 An aerial photograph of Cordova, Alaska, a small fishing village with fewer than 3,000 year-round residents. Photo by Guru Amar Khalsa.

"It’s about building trust. As we walk around town, people nod at us now. They’ve really opened the door.” - Mark Blaine

Some 1,500 miles northwest of the University of Oregon (UO) campus in Eugene, there is a small Alaskan fishing village called Cordova, a tiny speck on the map with fewer than 3,000 year-round residents. It’s not a place where journalists often hang around — at least not for long — but last summer marked the third consecutive year that UO students and faculty spent a month in Cordova reporting on climate change through the dual lenses of human memory and cutting-edge science.

The UO’s Science & Memory project is one example of how J-schools are charting the future of engaged journalism. At the Experience Engagement “un-conference” in October, educators and students from the UO and other universities discussed how they’re experimenting with engagement in their own work. Here’s the scoop on three projects and publications that are thinking bigger than social media metrics and putting community at the heart of their engagement.

In 2013, SOJC senior instructor Mark Blaine helped launch the Science & Memory project in Cordova — a multi-year storytelling initiative that addresses complex climate and environmental issues from Oregon to Alaska. Unlike the media coverage of climate change that focuses on “news events,” such as historic droughts or superstorms, the SOJC team took a long-term approach with community engagement at its core.

“Our strategy wasn’t to go in with guns blazing and ask people what they think about climate change,” Blaine said. “We showed up and went to a lot of community functions, including ones that at first blush might not seem ‘on topic.’ But it’s about building trust. As we walk around town, people nod at us now. They’ve really opened the door.”

The Science & Memory team also adopted a more iterative approach to storytelling. Rather than report for months and then publish everything at once, the students and faculty instead posted daily updates, reflections and stories to a “field journal” on Tumblr. Many of these posts focused on the people of Cordova, from local fishermen to native elders, and they revealed glimpses of how climate change is being experienced by the community. The project team still produced a polished end product, of course, but the field guide met a different need, creating a space for the students to make their engagement visible — and to make it part of their journalism.

UO students learned the stories of locals like George, an elder of the Native Village of Eyak. Photo by Julianne Parker.

Launched in 2009, the Intersections project embraces the “nothing about us without us” ethos of community engagement, covering life in south Los Angeles with a mix of student reporting and community voices.

In its “Watts Revisited” project, the Intersections team partnered with local high-school students to report on the legacy of the 1965 Watts Riots, which left 34 people dead and sparked a national debate about issues of racial bias and structural inequality plaguing Los Angeles. The collaboration gave students from Augustus Hawkins High School an opportunity to collect and share the stories of their teachers, grandparents and fellow community members who experienced the tumultuous Watts riots and the aftermath that continues to unfold.

“We provided the storytelling tools, but we let the students tell the story,” said Jordyn Holman, an Intersections reporter who attended Experience Engagement. “For a lot of the students, the interviews helped them realize that those same issues are still problems today.”

Holman says Intersections’ digital format and community-focused mission make it easier for reporters to build authentic engagement into their reporting. Without daily deadlines or strict word limits to account for, the Intersections staff can be creative and purposeful about integrating community voices into their work. “We can use video, we can use audio, and when we go cover an event, we actually have the time to stick around and connect with people,” Holman said. “That really does open us up to more candid answers and more trust.”

The Columbia Missourian, University of Missouri

As racial tensions at the University of Missouri sparked a high-profile hunger strike and days of protests on campus, The Missourian staff kept hearing from community members, most of them white, who were skeptical that racial prejudice remained a problem. In response, reporters spoke with students of color and recorded their accounts of everyday racism on campus — a first-person storytelling project that received more than 42,000 views within a week.

“As student journalists, we could say, ‘Hey, we’re living here, we’re experiencing this, we can tell you what’s really going on,’” said Claire Banderas, a reporter for The Missourian. “It was a lot of pressure, but also a cool opportunity to step up.”

Even competing against national publications, it’s hardly surprising that The Missourian’s student reporters served up some of the most engaged, insightful journalism to emerge from the protests. With an entire team devoted to community outreach, The Missourian staff has spent years — not days — learning about the community, and they’ve woven engagement into the newsroom’s DNA, experimenting with everything from reader contributions to old-fashioned pamphleting. As a result, when one of the biggest news stories of 2015 arrived in The Missourian’s backyard, its reporters were ready.