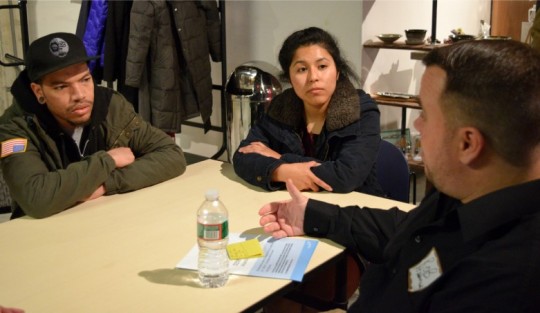 More than 80 people recently discussed how residents and journalists can work together to tell Atlantic City’s story. Image from NJ Free Press.

This piece was co-written by Fiona Morgan.

Atlantic City is a place of riches — not in terms of material wealth, but in terms of people, local history, neighborhoods and the overall sense of community.

“I got into this business to tell stories about people and give voice to people who otherwise would not be heard.” Donna Weaver, Press of Atlantic City

That message came through loud and clear Tuesday evening during the News Voices: New Jersey event at the Noyes Arts Garage, where more than 80 people came together for a conversation about how residents and journalists can work together to tell Atlantic City’s story.

We heard from Robert Wyatt, who’s lived his entire life in Atlantic City and works at a local social service agency. “I hope you can write some positive things about Atlantic City,” Wyatt said to the dozen journalists present, “because life is hard out here.”

Alejandra Sulpizio, who works with many nonprofits in the area and has a special interest in youth empowerment, told a story about how a convening of local youths helped elevate the voices of Atlantic City teens who often feel ignored. Dawn Belamarich of the group This Is AC pointed to the need to build a grassroots movement to underscore positive happenings in the city and act as a connective tissue to the various initiatives going on.

Press of Atlantic City reporter Donna Weaver spoke about the need to highlight community voices. “There are so many stories, not just casinos,” she said. “I got into this business to tell stories about people and give voice to people who otherwise would not be heard.”

The refrain of these conversations was that despite hardships, the city and its people endure through their bonds with one another, their entrepreneurial spirit and their desire to make Atlantic City a fair place to live and work.

We heard over and over that there is much about the city that few people know — about its history and the many projects that aim to empower those living there. “Atlantic City is a phoenix,” one person said, and many in the audience contemplated aloud what its next incarnation could be.

Economic issues were front and center in people’s minds. Attendees conveyed the pain of living in economically depressed neighborhoods even as the city’s casinos pull in revenue for the state. People noted how many local residents rent, and one young man said that his generation has had little opportunity to own their own homes.

But rather than lament these problems, residents said they wanted the media to pay attention to possible solutions. Local civil rights activist Steven Young said that after all the bailouts of banks and corporations, it’s time for a bailout of people and neighborhoods in places like Atlantic City. Others proposed specific ideas concerning taxes and local economic development.

After nearly an hour of small-group conversations, attendees were invited to choose among three separate breakout sessions with area media organizations.

WNET reporters Nina Chaundry and Lauren Feeney used a story booth to interview residents for a documentary project on the ongoing impacts of casino closures on the city and its people. This will appear as part of the station’s Chasing the Dream series.

Cole Goins and Scott Gurian, who work on Dirty Little Secrets, a collaborative investigative reporting project, presented an interactive map of toxic sites in flood zones along the Jersey Shore and invited residents to help them gather more information about such spots in their own backyards.

Bryan Mercer and T.C. Owens of the Media Mobilizing Project (MMP) screened a 15-minute film, Building a Sandcastle, that documents local union members’ struggles against casino owners. They then discussed how MMP uses media to empower people to make social change. Atlantic City resident Belinda Manning said she was drawn to MMP’s work because it provides an opportunity to tell stories about the resilience and creativity she sees in her community.

Meanwhile, reporters and editors from the Press of Atlantic City hosted a listening session in which participants talked about the stories they want to see coverage of.

Tuesday’s event was the second Free Press has hosted in New Jersey since the launch of the News Voices project back in May; the first was held last month in New Brunswick. News Voices will continue to engage community members and newsrooms in Atlantic City and other communities across the state through 2016.